Are there recent theories on physiognomy?

What are recent theories on the relation between personality and facial or body shape, and are there studies to support them?

See Wikipedia on physiognomy and somatotypes & constitutional psychology for background.

I would be most happy if you could go beyond the well-known facts about intelligence and beauty.

Aggression relates to facial width-to-height ratio (Carré, McCormick, & Mondloch, 2009; Carré & McCormick, 2008). The width-to-height ratio is the distance between the left and right zygion (the outside of the cheek bone) divided by the distance between the top of the upper lip and the mid-brow. Here's a useful image displaying the meaning of this ratio from the 2009 article: 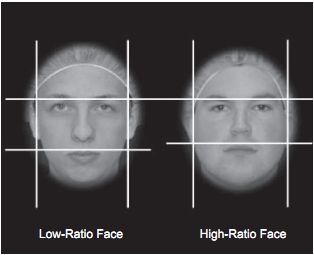 Carré et al. found that the lower the width-to-height ratio, i.e. the shorter the distance between lip and brow in relation to the distance from cheekbone to cheekbone, the more aggressive the person is (as measured through a well-validated laboratory task) and is perceived by strangers.

Also, the Big Five differ in observability (Penton-Voak, Pound, Little, & Perrett, 2006). Participants were asked to rate the Big 5 aspects of the personality of strangers. There was a strong agreement between these ratings and the results of a personality test the depicted persons had filled in (reliability calculated as Cronbach's $\alpha=.70\text{–}.89$ for all dimensions, only male conscientiousness was $.63)$. Similar results were found with composite images.

Here are some composite facial images from that article: 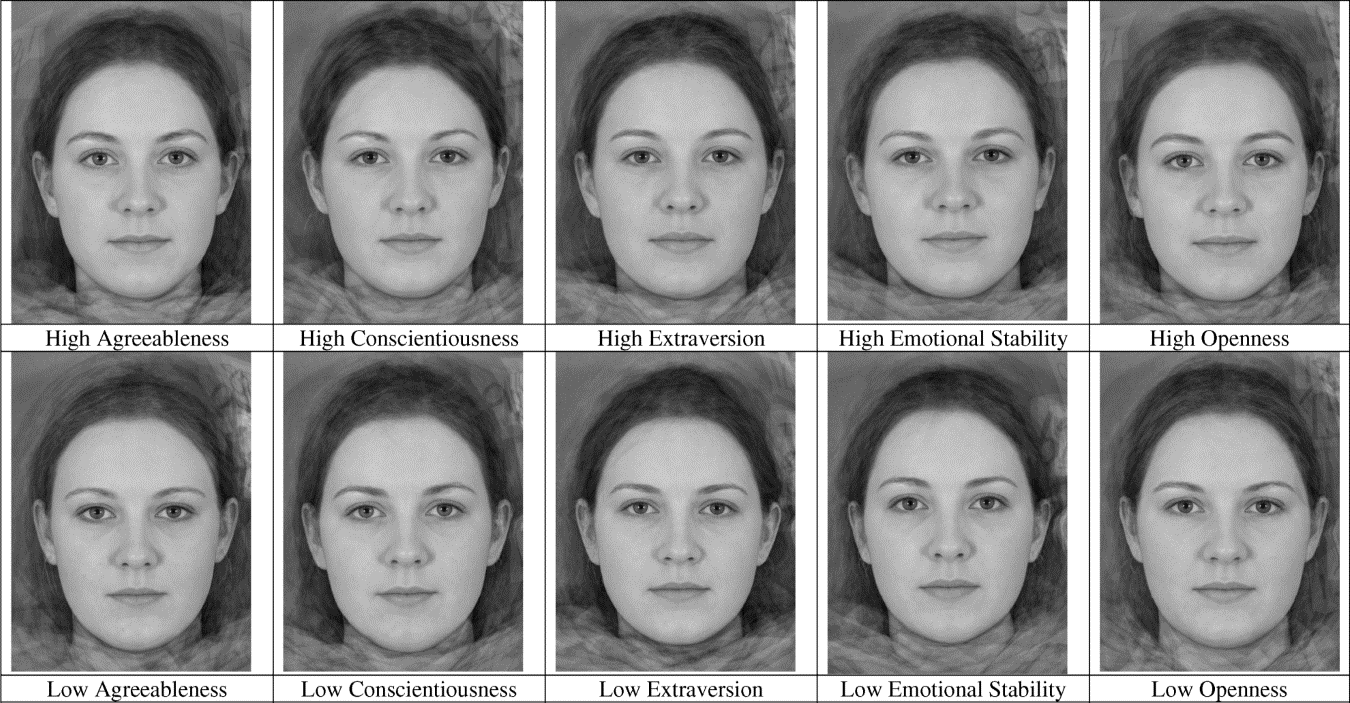 Differences are subtle, but perceptible! BTW, I think I came across this from The Personality Puzzle (Funder, 1997) originally, but I'm not 100% certain.

Some of these facial differences may relate to testosterone. Dominance and masculinity relate to perceptible differences in male facial shape due to the prenatal influence of testosterone, but fortunately for the scope of this answer, these differences do not affect attractiveness to females (Neave, Laing, Fink, & Manning, 2003; Swaddle & Reierson, 2002).

There is some evidence that body mass index (BMI) relates to higher extraversion and psychoticism and lower neuroticism in middle-aged Japanese people (Kakizaki et al., 2008), impulsivity (Murphy, Stojek, & MacKillop, 2014; first citation of the new year!), hypomania (Valenti, Omizo, & Mehl-Madrona, 2011), and worse cognitive executive functioning (Gunstad et al., 2007). However, one study did not find a relationship between BMI and personality psychopathology (Picot & Lilenfeld, 2003). Another study found a positive relationship between neuroticism and BMI in middle-aged American women only (the opposite of the relationship in the Japanese population according to Kakizaki et al., who did not mention prominent sex differences) and extraversion among men only (same direction as in Kakizaki et al., but again, more sex differences), as well as negative relationships with openness, agreeableness, and conscientiousness (Brummett et al., 2006). Low conscientiousness related more strongly to BMI in women, and predicted BMI increases over time.

Testosterone relates positively to emotional arousal and anger, but also relates positively to attentiveness to angry facial expressions in others (van Honk et al., 1999). This latter result demonstrates that testosterone doesn't unilaterally decrease awareness of others' emotional states, especially to whatever extent they pose immediate threat. The relationship between testosterone and antisocial behavior is also moderated by socioeconomic status (Dabbs & Morris, 1990). These complexities may limit the otherwise impressive relationships between personality and testosterone.

In women, estradiol may instead play a similar role to testosterone in men, modifying dominance motivation (Stanton & Schultheiss, 2009). Wikipedia lists some observable physiological effects of estradiol, but these claims currently lack supporting citations.

5
How are personality traits "encoded" in the brain?
4
What are the cognitive effects of increasing testosterone levels in men?
0
Are there connections between some properties in peoples faces and their behavior?
2
Can observing a composite photo of one's own face have an impact on own personality?