Does the time required to read a word grow linearly with the number of characters?

I recently installed a speed reader on my tablet. Now I wonder how the minimal time needed to read an $N$-letter word grows.

Does the time required to read an $N$-letter word grow linearly?

The average response times for single words in a lexical decision task (depart real words from nonsense words) is plotted below.

The curve follows a U-shape and span over several dozens of milliseconds. 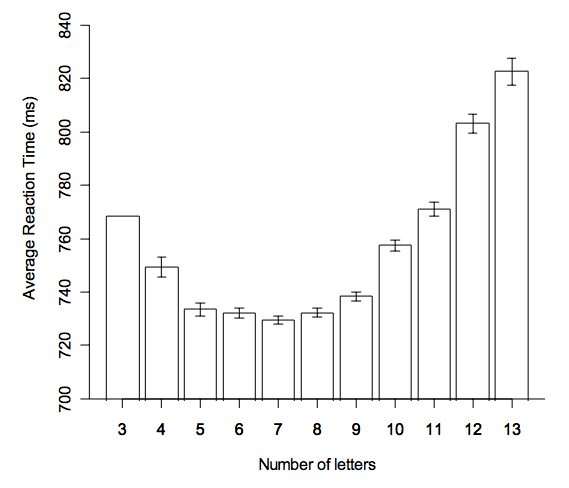 Figure 2. Average reaction time and 95% confidence interval for words with lengths from 3 to 13 letters if length was the only factor having an influence (all other factors have been partialled out).

To answer your question, we must first understand what you mean with "read". Since you ask in the context of speed reading, you appear to be interested in extracting meaning from written text. So we can rephrase your question as:

Does the time to recognize and understand a word increase with word length?

The effect of word length has been studied for two tasks, lexical decision and naming. In a lexical decision task participants are presented with words or nonwords (e.g. "dftrpg") and have to quickly press one specific key for words, and another for nonwords, on the keyboard. The time between the presentation of the stimulus and the key press (the reaction time) is registered. Since you are reading a text in which there are no nonwords, lexical decision is irrelevant in the context of your question.

A naming task is similar to a lexical decision task, with the exception that participants read the words aloud, and their responses trigger the computer via a microphone ("voice key"). Again, the reaction times between the presentation of the stimulus and the spoken word are registered. Since we cannot directly measure understanding, we assume that naming reflects understanding. (Of course you can speak words that you do not know, and even nonwords, but the reactions times would be significantly longer, so we would notice the difference. As long as RT is reasonably short, we may probably assume that the participant knows that word and has understood it.)

Not every time a participant names a word will he or she do so in the exact same time. Sometimes someone will be a bit slower to react, sometimes a bit faster. So we calculate the average reaction time for each word. What we note is that these average reactions times are not the same for different words, that is: the reaction times vary. Now, what we want to do, is explain this variance. Is it in some way related to word length? Or does it correlate to other characteristics of the words, such as number of syllables, word type (noun, verb, adjective), word frequency (how often a word is actually used in everyday spoken language), and so on.

After a number of calculations on the data, we find that all these aspects explain a part of the variance in reaction times (Baayen, Feldman & Schreuder, 2006). Here is a table of the different word characteristics (the predictors), and how much of the variance in naming speed they predict. Only those predictors are listed that had a significant effect. The numbers are adjusted R2 × 100, i.e. the percentage of variance uniquely accounted for by each predictor over and above all other predictors. You don't have to understand the meaning of these numbers, but they show the relative strength of the effect each predictor has on naming speed.

In all, the results are:

To answer your question, we can say that the length of the words has probably no noticeable effect on your text reading speed.

Not the answer you're looking for? Browse other questions tagged perception performance reading or ask your own question.

23
How long does it take to read a sentence with X number of characters?

23
How long does it take to read a sentence with X number of characters?
11
What are the effects of alcohol on muscle memory?
6
How does appreciation for music change over time for the same person?
4
What is the name of the effect or concept behind getting along better with people after time apart?
5
How does the brain read rotated text?
5
Is there a difference between the time/effort it takes for the blind and the sighted to learn to read Braille?
4
Does the strength of the simultaneous contrast illusion vary with the length of time it is viewed?
3
Does the perception of odors change over time?
1
How long does it takes for the feeling of vengeance to fade away by time?
3
Does the way you perceive something for the first time have a big influence on future perceptions of similar stimuli?