What effect does the colour of an "Open" sign have on people's behavior?

I am in the process of designing a nice OPEN sign, and I noticed that the vast majority of them are red. This seems bizarre to me, yet green open signs look odd. I just wondered if anybody knew why red seems to be the chosen colour, and what effect this is hoping to have on the viewer of the sign.

To clarify, I am talking about an OPEN sign which will be placed in a sandwich board and stand outside a shop. But it can refer to any sign that indicates a retail establishment is open for business. I would also like to use the image on the website, though obviously in a smaller size, to be shown during the opening times.

Here is a for instance:

If you Google "open sign" and look at the images, you will see that the most common colour is red. The green ones you see tend to be signs instructing you to push to open. The most common sign for open for business is red.

It's a conscious choice, so to truly know why, you'd probably have to ask the sign designers themselves...but I can speculate a bit on reasons one might want to choose red. Red is often associated with appetite, impulsivity, and excitement, all of which a merchant might want to encourage in potential customers. Here are some excerpts [emphasis added] from one of many research articles relating color to emotion (Kaya & Epps, 2004; this site may raise security warnings with your browser):

It is widely recognized that colors have also a strong impact on our emotions and feelings (Hemphill, 1996; Lang, 1993; Mahnke, 1996). For instance, the color red has been associated with excitement ...Red, symbolically known as a dominant and dynamic color, has an exciting and stimulating hue effect. It has both positive and negative impressions such as active, strong, passionate, warm, but on the other hand aggressive, bloody, raging and intense...Choungourian (1968) found that the colors red and blue were the most preferred colors among American subjects, but were less preferred in other cultures...Warm colors (e.g., red, yellow, orange) are seen as active and stimulating (Ballast, 2002)...As cited in Lang (1993), Grandjean made observations about the effects of color on perceptions of room size and psychological response noting that...warm colors such as red, orange, and yellow make a space less spacious, while increasing stimulation. Furthermore, people exposed to red and yellow colors reported higher levels of anxiety than did people exposed to cool blue and green colors (Kwallek, Lewis, & Robbins, 1988, Mahnke & Mahnke, 1993). However, in other studies, no relationships have been found between the individuals' mood states and colors (Ainsworth, Simpson, & Cassell, 1993; Kwallek, Lewis, Lin-Hsiao, & Woodson, 1996)...

[From this study's own results] About 80% of the responses to the principle hues, including red, yellow, green, blue, and purple were positive...Only 17.8% of the responses to the principle hues' were negative...The color green attained the highest number of positive responses (95.9%), closely followed by yellow (93.9%)...Among the principle hues, the next highest number of positive response was given for the color blue (79.6%), followed by red and purple (64.3% each)...The color red prompted both positive and negative emotional reactions. Red was seen to be positive because it was associated with love and romance, while the negative aspects of red included having associations with fight and blood as well as Satan and evil.

It seems like green might be a good choice too (this article had more to say about green than I've copied here), especially outside of USA, but red certainly isn't a bad choice for attracting interest, according to these references. Many of these associated emotions involve arousal of interest and activity, which might encourage a person to act on any impulse to gain something by entering. Any increase in anxiety or fear might also snap a person out of complacency if that person is on any level worried about passing up an opportunity or losing something by not entering. However, the opposites may be true too: red might encourage a person to continue pursuing other passions that preoccupy the person's attention before viewing the sign, even if the sign captures attention momentarily. If a person is afraid to enter for whatever reason, associating the store with anxiety, fear, evil, or of course Satan himself would certainly seem a likely disincentive. Nevertheless, positive responses seem more frequent in general, so a red sign might do a store more favors than harm overall, regardless of whether it's the best choice.

Edit: @DominicLloyd found a cool article on colors in marketing that includes an interesting infographic: 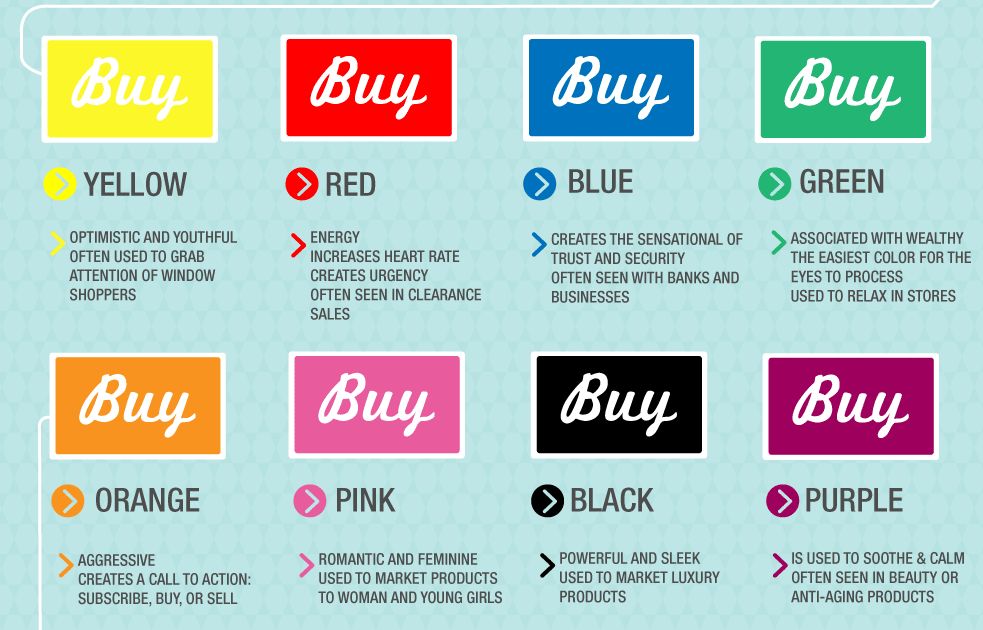 Not quite sure what evidence there is to support these claims, but the original source is KISSmetrics, so maybe one could follow up with them for details.

If you are creating a sign that is lighted (like a neon sign), another factor favoring green is that moderate and bright green lights are easier to see than other colors, due to the cone activity.

I don't think this would have any affect for non-lighted signs, though.

Brief documentation of this phenomenon

9
What is the psychological effect of wearing black clothes?