Why does society interpret “manliness” differently?

If, by definition, manliness is "the traditional male quality of being brave and strong," why does most of society perceive it differently? For example, a person who watches My Little Pony and is not afraid to admit it, thus being brave. However, society would think of this person as not manly because he is watching a show meant for little girls. Do our minds perceive being manliness based on what other people think of as manly? Is this why society thinks of manliness differently than what it really is? And, if so, why do we base our opinions on those of others? Also, is manliness what it is defined as or what we have made it to be through society?

Most of society can't agree entirely on how to define manliness. Two broad ways come to mind as to how it might be done though. The first way would be to use gender or sex (depending on one's reasons for asking, I suppose) as a criterion variable for exploratory analysis of related variables. A statistical analysis like multiple logistic regression could be used to identify what information about people's other characteristics can help predict whether they're men or women. This would be the more objective, empirical way of defining what it means to be a man (or woman), at least probabilistically. The second way is by defining gender roles, as @caseyr547 did.

The second way definitely implies a choice to attend primarily to social constructs rather than empirical reality. It's important to appreciate that gender roles do not define the actual behavior of people, so the extent to which people really follow their gender roles is limited; the first way I mentioned would produce a better description of actual behavioral profiles and sex/gender differences.

However, it's also important to appreciate that gender roles are, by definition, socially normative expectations based on gender, and therefore society imparts causal force to these constructs. People generally (society) want other people to fulfill their expectations, so gender roles also define what is socially desirable. Socially normative attitudes about what behaviors are desired, not merely expected, may even define gender roles, depending on whom you ask. People have very many ways of motivating others to care about their opinions, and to ultimately agree with and adopt/"internalize" them, so there is overlap in and feedback between the empirical reality of sex differences and the cultural context of gender roles. That is, gender roles, being defined as expectations, change to suit how the genders actually behave, and people change the ways they behave to suit their cultures' gender roles. Thus some overlap is maintained dynamically, but still limited by human error, among other factors.

Besides human error (failing to calibrate expectations to reality, and failing to calibrate behaviors to expectations), one major factor that limits the overlap of expectations and reality is cross-cultural variation. Gender roles may vary widely across cultures, but mostly operate within cultures (due to too much ethnocentrism and not enough travel, among other factors), so each culture's specific gender roles may generalize poorly to other cultures realities, and influence them very weakly. If I had to choose one reason to bet you're right in saying "most of society" perceives manliness differently, it would be cultural differences. Still, there are other reasons.

Another major factor that limits the applicability of gender roles is counterculture, which does not simply represent the alternatives that society rejects. Counterculture is better defined as representing those who reject their cultural norms for various reasons. When imperfect norms are especially popular, their popularity may actually reinforce the popularity of the opposition as well, because exposure to an idea increases opportunities to become opinionated, explore counterarguments, and either agree or disagree rather than remaining neutral by default. Therefore subpopulations of intentional norm-violators are also maintained dynamically. Some may disagree simply because they like to disagree or differentiate themselves from others. Others may have principled objections to specific norms; their viewpoints gain popularity among dissenters when the majority exerts conforming pressure (which it pretty much always does). In this way, countercultural movements can become very stable and widely influential.

However, many may only be as stable as the norms they oppose. If the norm changes (and not necessarily for the better), the opposition may change in the opposite way to remain directly defiant. This may not suit the original principles of the opposition, but when such movements are dominated by leaders who focus more on defiance than their principles, they may sacrifice integrity to maintain popularity through their parasitic relationship with the mainstream. This sort of power motivation further reinforces a limited amount of norm violation regardless of what norm is in question. Note also that power carries sex appeal, so even if women didn't have other reasons to find effeminate men attractive, they would be attracted to effeminate men who belong to a powerful counterculture (and vice versa regarding men's attraction to masculine women). This (and other influences) means countercultures find support among people who may nevertheless adhere to norms in their own behaviors (e.g., feminine men may attract women regardless of the women's own femininity).

These dynamic processes make manliness very hard to pin down by the second way that focuses on gender roles. To recap, reality influences them somewhat, so they reflect reality somewhat, and real people try to follow them somewhat, so reality reflects them somewhat...but some people also try not to follow them. This all plays out somewhat independently within separate cultures, so plenty of "errors" in the accuracy and influence of gender roles arise naturally from these two factors alone (not to mention others). Thus plenty of disagreement exists, and even gives rise to bizarre inversions of the normative archetype, such as the brave and (not so) thoroughly manly Brony meme, which like many countercultures is commonly, thoroughly misunderstood. 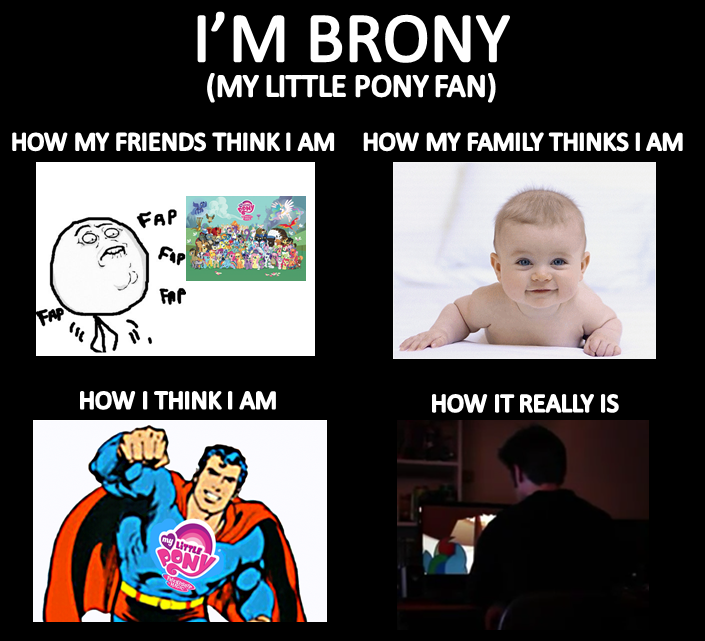 Nevertheless, this is not to say psychologists haven't tried to pin down gender roles. A fair amount of consensus may even exist on some essential aspects, especially in Western culture (probably because America and Europe have particularly active psychology programs). An interesting list of gender-linked traits by a philosophy author with a fairly sophisticated perspective on gender-personality literature gives a decent picture of how gender roles might be measured in detail (among other ways, which probably are less detailed), as well as an opportunity to assess one's own alignment with Western gender roles. There are also Wikipedia pages on masculine and feminine psychology, which may be of interest. If nothing else, I find it funny that the masculine psychology page is tagged with disputes that suggest an egotistical tone, and the feminine psychology page is tagged for cleanup in a way that suggests scatter-brained writing. Both "egotistical" and "scatter-brained" fall under Park's respective lists of "regrettable" gender-linked personality traits! I'll let you decide whether you think they're manifesting on Wikipedia through real differences in the writing, or maybe through some other influence like stereotyping and confirmation bias (maybe even on my own part)!

Let me give you some background to your question first. You're asking a question about anthropology, sociology and psychology. Anthropology basically studies culture. Culture is all the learned behaviours we practice because of our development and training by our family and society in general. Sociology focuses more on society itself, any group of humans functioning together. Psychology is all about behaviours of individuals and sometimes groups.

Now to your question. Though a social, biological and psychological evolution traits for males and females has been ascribed, they are commonly referred to as gender roles. A set of social norms (behavior with is acceptable) for guys and girls.

Gender typing is the process by which children identify their genders and begin taking on the traits of others who are also of their gender types, mainly their parents or other guardians.

One could argue that the origin of the aggressive male is biologically linked to our primal origins. Our increased testosterone and muscle mass because at one time males were responsible for defending the family in addition to hunting and killing meat products. Females with increased estrogen and direct link to offspring are biologically designed to nurture children, at least until they have teeth. (Such theories have obvious flaws pointed out by modern psychology but the idea in general is well accepted.)

So watching My Little Ponies is not a culturally typical behavior for masculine males fulfilling Western gender roles because it is not aggressive. In addition it was specially designed to fill the gender role of females. It would be acceptable behavior for effeminate males in Western society. There is some argument that the Western male gender roles are becoming less of a polar opposite from the female roles, but that has not played out in general society.

While it may be brave to be counterculture; society tends to reject said groups.

Not the answer you're looking for? Browse other questions tagged social-psychology sex-differences norms social-desirability or ask your own question.

5
How to interpret the meaning of “crossed arms”?
5
Does society swing back and forth from one extreme to the other?
6
Body Language: Why do we act differently around someone we're attracted to?
19
Why do people avoid taking the last “donut”?
15
Has anyone formally tested Josh Pellicer's theory on human sexual behavior?
4
Why do we require social interaction/engagement?
5
Why are people insecure?
2
How widespread is learned-helplessness in society?