Which personality traits cause "non-cruelty"?

Human behavior towards other living beings can be classified into three categories:

You cannot always care for the well-being of everyone around you. Therefore active altruism cannot be a general guiding principle of behavior. But you can always chose not to be actively cruel. Lacking a better name, I will call this type of behavior, which includes both altruistic and neutral behavor, "non-cruel", as suggested by Nick Stauner.

What I would like to know is if there are predictors that differentiate between habitually cruel persons and those that are usually either actively altruistic or at least show a passive lack of deliberate cruelty and knowing acquiescence of suffering?

Which personality traits are responsible for habitually non-cruel behavior?

I am interested in traits in the traditional sense (patterns of behavior, thought, and emotion) as well as neural correlates of non-cruelty.

I've been commenting a lot and not answering for quite some time now! My hesitation was largely due to the terms "unfailingly", the mixture of "altruism" and "non-cruelty", and having forgotten my intention to answer. My answer certainly won't be foolproof (haven't yet heard of a trait model that is), and I may not cover both altruism and non-cruelty, but here are some pointers anyway...

To start this answer off "Big", I'll begin with agreeableness (and its Wikipedia page, which has a lot to offer on the topic), one of the Big Five personality traits [emphasis added throughout]:

Agreeableness is a personality trait manifesting itself in individual behavioral characteristics that are perceived as kind, sympathetic, cooperative, warm and considerate [(Thompson, 2008)].

All of these aspects (traits unto themselves, really) will relate somewhat to non-cruelty or altruism; even cooperation entails not harming one's teammates and sometimes putting them first.

People scoring low on agreeableness are generally less concerned with others' well-being and report having less empathy. Therefore, these individuals are less likely to go out of their way to help others. Low agreeableness is often characterized by skepticism about other people's motives, resulting in suspicion and unfriendliness. People very low on agreeableness have a tendency to be manipulative in their social relationships. They are also more likely to compete than to cooperate.

Less concern for others' well-being and emotions in general means greater freedom to disregard or willfully harm them, as are often useful to do for personal gain via manipulation or competition. Here we also have a direct connection to altruism, and a few indirect connections, including disinterest and mistrust of others' concerns. Yet the most direct connection to altruism appears in the facets of agreeableness (lower-order factors in a second-order model of agreeableness as a multidimensional construct; see Figure 1 for a similar model):

Agreeableness is considered to be a superordinate trait, meaning that it is a grouping of personality sub-traits that cluster together statistically. The lower-level traits, or facets, grouped under agreeableness are: trust, straightforwardness, altruism, compliance, modesty, and tender-mindedness [(Matsumoto & Juang, 2012)].

I've emphasized trust and straightforwardness above because the Big Five model of personality isn't the only one that relates trust to altruism—see also: 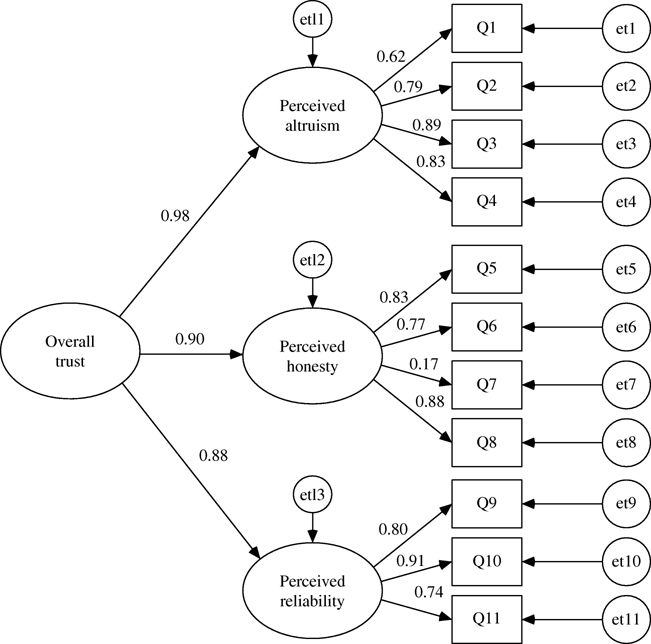 Again, logically, a lack of trust would likely reduce motivation to help others altruistically. As for straightforwardness, Wikipedia notes, "Low scorers...are generally deceitful or manipulative." Again, these behaviors are likely to relate to some form of cruelty more often than not (i.e., "white lies" are the exception, I assume).

Also, from the same section, "Straightforwardness is similar to the honesty aspect of honesty-humility in the HEXACO model" (Ashton & Lee, 2005). So, speaking of HEXACO...

This implies a little complexity in altruism itself, but brings agreeableness, honesty-humility, and emotionality directly into the equation within the HEXACO model. It may also claim that emotionality is "distinctly different" from neuroticism, but I'm not sure I'd go so far. Consider that neuroticism relates negatively to happiness in the context of the Wikipedia page on altruism itself:

While research supports the idea that altruistic acts bring about happiness, it has also been found to work in the opposite direction—that happier people are also kinder. The relationship between altruistic behavior and happiness is bidirectional. Studies have found that generosity increases linearly from sad to happy affective states [(Underwood, Froming, & Moore, 1977)]...While generous acts make people feel good about themselves, it is also important for people to appreciate the kindness they receive from others. Studies suggest that gratitude goes hand-in-hand with kindness and is also very important for our well-being. A study on the relationship happiness to various character strengths showed that "a conscious focus on gratitude led to reductions in negative affect and increases in optimistic appraisals, positive affect, offering emotional support, sleep quality, and well-being" [(Shimai, Otake, Park, Peterson, & Seligman, 2006).]

This adds happiness and gratitude to the equation as well, which can be measured at the trait level.

BTW, since empathy has come up a fair amount, you may be interested in the "empathy-altruism hypothesis". This also implicates empathy as a trait of sorts that relates to altruism, but I'm not sure this adds anything to what I've said above. Also, while I'm disclaiming, I may not have addressed cruelty sufficiently yet, much less neural correlates. Both are likely to make the necessary answer much bigger, so I'm at least going to take a break on this one for now. I'd encourage someone else to step up and cover those bases in the meantime.

Here are some things that recognize above average habitual aggression:

Investigators from the Université de Montréal in Canada found that negative behavior at age 6, such as fighting, disobedience, and a lack of empathy, predicted criminal convictions by age 24. http://www.medscape.com/viewarticle/781279

Dick's research found that three factors can predict violence in men with 88 percent accuracy: Men who have witnessed their fathers abuse their mothers, men who are victims of a father's abuse themselves and men who have low self-esteem are the most likely to be violent themselves. http://www.uc.edu/info-services/batter.htm

All the mentioned causes are long-lasting or even permanent. So there isn't any short or easy answer as to what makes a person aggressive. All I can say is that people who are habitually aggressive have some kind of...issue... and they can't really help it, because most of these causes have no simple treatment.

Empathy is a concept of Psychology. Human individuals can attempt to understand the emotional state of another being and act in a way which that being would like to be treated. Altruism is a different concept. Where individuals are compelled to act in a way which they view is the best for the welfare of the individual. Someone with extreme empathy might assist someone in committing suicide because they are able to feel the emotional or physical pain of the person contemplating death. Likewise a person with extreme altruism would go to great links to continue the life of someone on the brink of death. Like carrying a mother out of burning building as she screams and resists because she wants to search for her child.

It is the contention of some psychologist that empathy can be taught especially to children and prisoners. Likewise also some research has been done into teaching altruism.

Lessening egocentric behavior seems to be the theme of both programs to teach empathy and altruism.

In non-scientific theological circles repeated exposure to principles of compassion (by lessening self-centeredness) have been known to induce altruism in certain individuals. Yet this same teaching of compassion has also been shown to induce sociopathic behaviour as well. Having the opposite effect of that which was intended.