Which equation is Ebbinghaus's forgetting curve and what do the constants represent?

My first question is which forgetting curve is correct? And if both or the latter is, where did the constants $k$ or $c$ come from? What do they represent?

The question which of these two descriptions is correct? is perhaps natural in the context of, say, someone studying for an examination. Epistemologists might suggest that a better formulation would be is either of these correct?

However, as stated here there are clear reasons for preferring the first formulation to the second. I shall first explain why, and then attempt to reconstruct a more useful form for the second approach.

The factor of $100$ in the numerator of the fraction in equation $2$ suggests this was intended to be adapted to percentage correct, and should be dropped to make the two formulations more easily comparable.

This yields $R_0 = 1$, whilst $R_t$ is now a convex, strictly decreasing function of $t$. Surely both of these features are desiderata for any expression for retention.

Note that now (what we may term) model $1$ ($M1$) is a 1-parameter model, whereas $M2$ has two parameters, which might be preferred for an empirical data-fitting exercise. Both models have a linear approximation for small values of the time variable, namely:

Where now $\lambda$ is clearly seen to be a scaling factor which must be applied to both variables, time and strength. This is perhaps a slight conceptual clarification, since the intervening variable strength is shown to be dimensionally equivalent to time. A strong memory is one that lasts for years, whereas, with the possible exception of the type of mnemonist studied by Professor Luria, few of Ebbinghaus' experimental subjects would retain any memory of his deliberately unmemorable nonsense syllables after the passage of more than a few weeks.

This observation also has a bearing on experimental methodology. Some nonsense syllables might be more memorable for a given subject - for example if, by chance, the syllable happened to match the subject's own initials etc. Such effects should, however, merely contribute a small addition of random noise to the experimental data.

Here is the illustrate of both equation 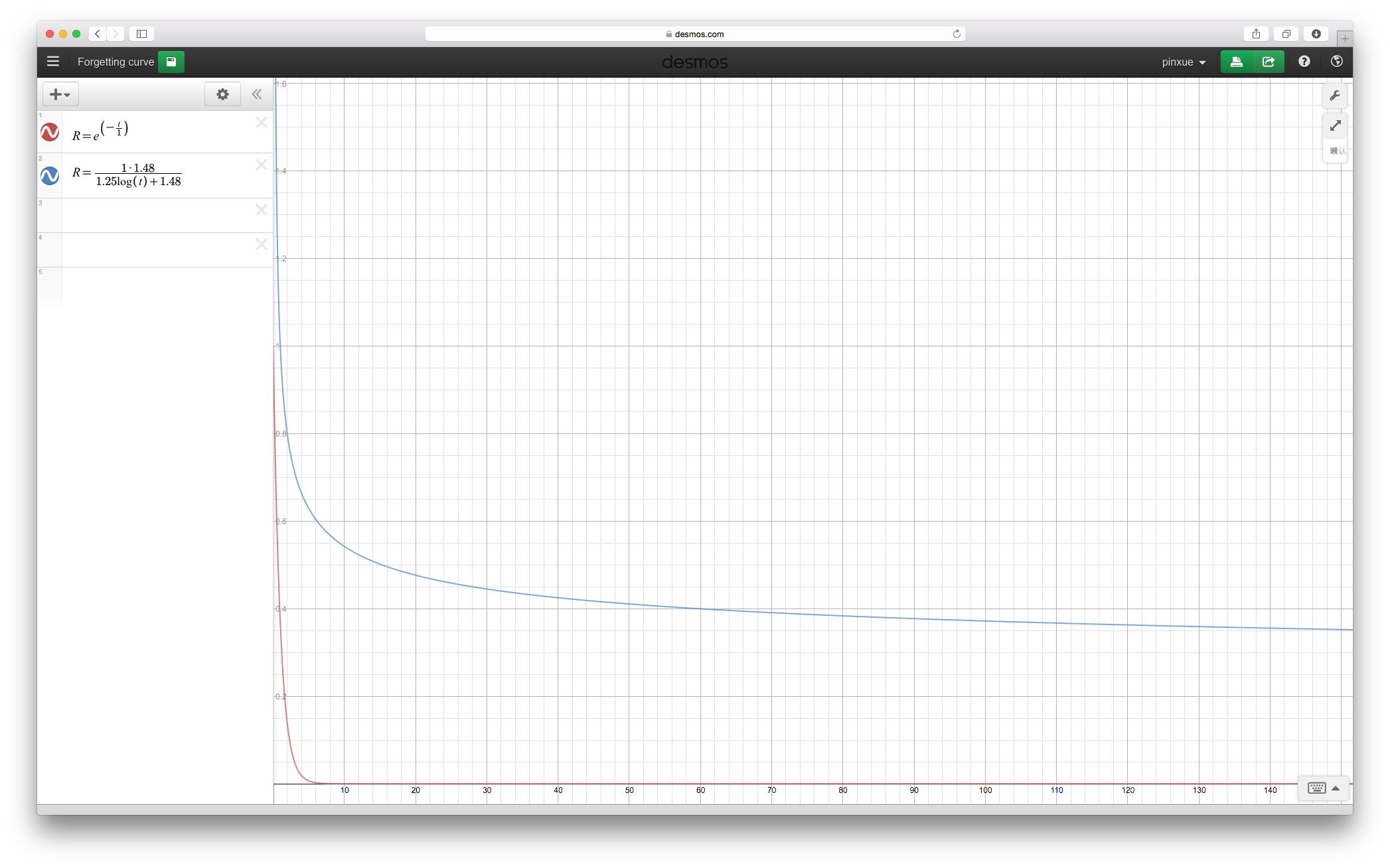 To make them visible at same time, I changed 100 to 1 and set memory strength as 1. They look alike.

Not the answer you're looking for? Browse other questions tagged memory cognitive-modeling mathematical-psychology or ask your own question.

11
How does the Forgetting curve change after repeated exposure to the same item we would like to memorise?
4
What neural mechanism explains the phenomenon that bad memories fade faster than good ones?

7
What causes people to remember events which did not take place?
10
What are the mathematical models of memory?
6
How are these review-forgetting curve calculated?
9
What are the neural substrates of retrieval induced forgetting?
9
The prisoner dilemma does not violate classical probability laws
11
How does the Forgetting curve change after repeated exposure to the same item we would like to memorise?