Psychological explanation for perceptions of the Loch Ness monster

I previously asked about whether physics could explain the occurrences of the rogue waves which could psychology explain the eyewitnesses' perceptions of the Loch Ness monster? (The Physics.SE question has been put on hold because not all of it is about physics.) 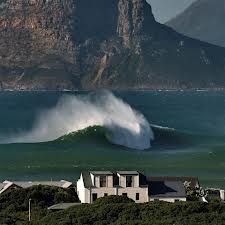 Edit You are walking along a country lane, when a sudden motion on the water catches your eye. Followed by the sound of a crashing wave. Within seconds, only ripples remain on the surface. You remember the image as shown above. It could be a white-cap on a wave, but everyone who has been to the beach knows that waves come in one-after-another, and there are no other waves, so it can't be a wave. You notice the darker area under the white-cap and realize the only possible explanation is: you have just seen a large animal dive under the surface. Like a sounding whale. (Or monster?).

Loch Ness is located near a major fault line that has seismic activity. Physicists can explain that a wave created by seismic activity is a rogue wave or tsunami. They can also explain why the wave does not reach shore and, why the area under the white-cap is always darker.

So, could a collaboration between physics and psychology show this illusion is a possible explanation for Nessi?

Herd mentality and hallucinations can explain many things like the Loch Ness monster, ware wolves, vampires and ghosts.

Hallucinations involve sensing things while awake that appear to be real, but instead have been created by the mind.

Extreme emotional states can cause psychosis which leads to hallucinations and delusions and other thoughts which are removed from reality. Many things can stir an otherwise normal person into a frenzy which then provides the vulnerability for psychosis. Then at the sight of wave their imagination is more real than what their eyes see and the image of a monster is imprinted in their memory. If the monster is attacking them or something else it might be an intrusive thought as well.

After the initial hallucination the story is repeated and herd mentality will cause others to experience something similar at the sight of the wave. As more people experience the sighting it becomes more popular continuing and expanding the myth.