Which human instincts do gamification systems appeal to?

As a Stack Exchange user, I spent quite a while thinking about how they managed to trick me into putting so much effort into it. Reputation, badges, etc., are all virtually useless, yet I put great effort into gaining them.

I've come to the conclusion that the system at least partially exploits that I am not an entirely rational being but instead rely on instincts, for example by exploiting the urge to collect badges. What other instincts do gamification systems appealed to?

In general, I believe gamification taps into 2 main human behaviours. Competition & Pride (in that order)

Various systems balance these differently, and of course it's also very subjective but I believe that when people first sign up, it's about competition, and after they compete (and win trophies) it's about Pride.

The above 2 drivers really refer to those users who indeed buy-in and engage with your gamifications - But if you run a public website where buy-in rate could be considerably low you may have many users simply exploring. Below are some considerations to keep these users involved in your gamifications and hopefully convert them to competitive patrons. 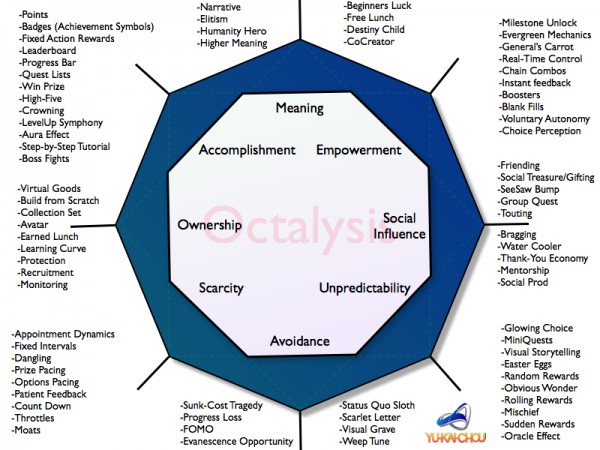 He highlights 8 Core Drives of Gamification and also gives a more holistic view of human motivation. People do not only play for the sake of winning and designing a system with only that perspective in mind will not yield very long term benefits.

You can find more on the framework here - http://www.yukaichou.com/gamification-examples/octalysis-complete-gamification-framework/

I read once that a sticky application needs to impact one of more of the seven deadly sins. Pride, Envy, and Greed and probably your main go to's when evaluating gamification. Some or all may apply to different people and systems to varying degrees.

Pride This is probably the main one that everything stems from. People love being seen as experts. They want to excel and win when it comes to competition. Standard gamification works great here.

Envy This is tied pretty closely to Pride. The desire to get what other people have is exacerbated by gamification, which enables people to feel envious of others and drive them to better performance.

Greed You've got some achievements - but do you have them all? Something drives people to collect and complete and accumulate and hoard. I'm not sure what it is but it does seem to be a fairly strong human trait.

According to a White Paper that Bunch Ball came up with, Gamification appeals to the following human desires:

Below are my thoughts on each one. The White Paper describes each one in more detail.

People like getting rewarded. This is one of the most basic things gamification provides: rewards. On Stack Exchange sites, rewards take three forms:

Of these three, privileges are probably the most powerfully motivating reward.

Even though Reward is one of the most basic things about gamification, it is also one of the most abstract. Rewards aren't a stand-alone motivation. For a reward to be valued by the recipient, the reward itself must meet another desire. The desires that rewards meet are usually status, achievement, or competition.

Julius Caesar once said, "I would rather be first in a small village in Gaul than second in command in Rome." While not all would agree with such a sentiment (There's also the "Big fish in a big pond" adage), it does show the value many people put in status. People naturally want to be looked-up-to, to be considered higher up on the ladder, to feel like they have more ownership of a place. In Stack Exchange sites, status is conferred most obviously in the privileges one gains with the site by reaching certain reputation thresholds. When a user has enough reputation to edit almost anything and make new tags, that user will feel a deep satisfaction that he is high up in that site's community.

Status. It's powerful. Don't underestimate it!

Most people likes achieving things to show how great they are. On Stack Exchange sites, this is expressed as badges. If you are good at asking really useful questions that everyone else wants an answer to, you can get badges for good questions. You also get badges for writing good answers. If you achieve writing the answer most useful to the one who asked the question, you get +15 reputation when it's accepted.

Personally, the achievement I want most on Stack Overflow is to earn "tag" badges for technologies that I want the world to know I'm good at -- Java, for example.

This one is probably not as central to Stack Exchange sites. The idea is, the more you participate, the more you can customize how you look on that site. For example, maybe a site will let you decorate your profile with custom bling or flare as a type of achievement or award.

This one is probably the most obvious. When you see that you are rising up on the leaderboard, or that someone lower than you is starting to draw even with you, it stirs up your competitive spirit and urges you on to do better to maintain your lead or take the lead from someone else. (This can also lead to problems if not balanced out -- for example, not upvoting a good question or answer that was useful to you because you're trying to outpace the person who posted it. But that's another topic.)

The noblest of all our desires. Even without the virtual rewards, the competiton, and the excitement, people tend to feel good about themselves when they've helped out someone else or aided someone in becoming better at what they do. (This is also why I dislike seeing rude comments or answers from people with a know-it-all attitude on Stack Overflow towards people who are new to the site and didn't research or make their question specific enough. It suggests to me that the person making such a remark had little Altruism in them.)

Altruism also gives you motivation to upvote someone else's post if it's good -- that person helped you by posting a question or answer you needed, and you help them back with an upvote.

Interactions of Desires and Mechanics.

Here is a diagram from the White Paper that shows how these desires and the the mechanics of gamification typically interact.

The green dots signify the primary desire a particular game mechanic fulfills, and the blue dots show the other areas that it affects. 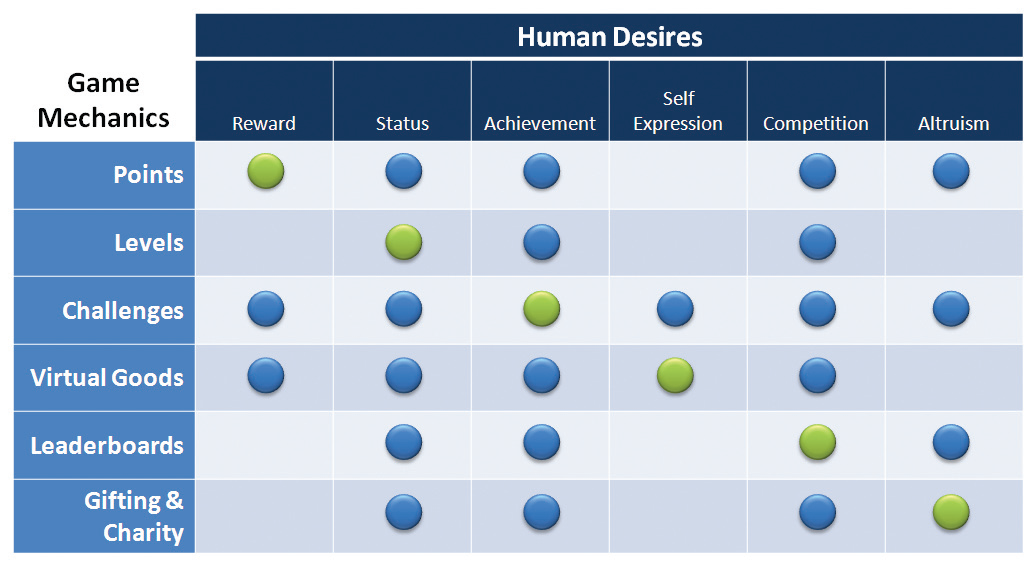 Link to the White Paper:
http://www.bunchball.com/sites/default/files/downloads/gamification101.pdf

I think the main things you naturally want are to:

Studying Facebook data, someone (someone will have to help reference this) found that the main compulsion to use the service was self-presentation. So that might play a role here too. But I expect different people will respond differently, but clearly SE aims towards a specific segment of the population.

And in response to some of the other answers getting many votes:

Yes, some people are driven by competition because they think that it reflects their skill and stature. But I expect this affects a vocal minority of the people who use SE.

9
What is the motivation model behind StackExchange?

26
Have ideas of “gamification” been applied to education?
13
What are the minimal requirements for successful gamification?
19
How can I use gamification to encourage people to complete workplace training?
3
What positive techniques can be used to motivate individuals resistant to common gamification techniques?
10
Has there been any research done that contrasts point-based and achievement-based gamification methods?
1
What is the difference between (and importance of) extrinsic vs. intrinsic rewards in gamification?
10
How can I incentivize users to perform creative tasks?
5
Can rewards incentivise shortcuts to be taken which wouldn't be done otherwise?