Do we understand the non-subjective mechanisms behind pleasure and pain?

If we are to view pleasure and pain as being essentially synonymous with the more mechanistic concept of reward and punishment (i.e. as a part of learning and motivation system) then do we understand how this actually occurs at a neurobiological level? At least in "lower" animals, pain seems to simply cause an aversion response. Pain motivates the animal to stop whatever it was doing (possibly stopping the pain), and to avoid in the future repeating similar responses to those that preceded (and therefore were possibly causal toward) the incident that caused pain.

This sort of thing is not that hard to replicate in computational models, so it is clearly nothing magical. Obviously, the subjective "experience" of pleasure and pain gets more into philosophy of mind and that's not what I am asking about. I am only concerned about the mechanism which can explain outwardly observable behavior -- especially in simpler animals -- such as the basic stimulus-response-reward/punishment learning that a mouse or bird can do.

I think part of the answer to your question is going to include the dopamine "reward" pathway in the basal ganglia. In particular, a leading theory of dopaminergic function is the predictive reward error or reinforcement learning hypothesis. In this theory, dopamine neurons signal expectations about the outcome of particular stimuli.

A somewhat updated revision of the theory is outlined in a review by Redgrave and Gurney, 2006 (PDF). Importantly, they note that dopamine neurons suppress their activity in response to noxious stimuli (the pain aspect of your question). They also raise some tough questions about how exactly this dopamine signal interacts with other parts of the brain to mediate the learning suggested in the theory.

As with basically all neurobiology theory, a full understanding of how this signal that we detect in individual neurons translates into a coherent behavioral response program is a long ways away. But the basal ganglia, in general, are sometimes thought of as an action selection system (or "decision path" selection to use your words), so the ability of dopamine neurons to signal expectations is relevant.

Neurobiology is not my field of expertise, but this paper seems relevant:

What we eat, when and how much, all are influenced by brain reward mechanisms that generate “liking” and “wanting” for foods. As a corollary, dysfunction in reward circuits might contribute to the recent rise of obesity and eating disorders. Here we assess brain mechanisms known to generate “liking” and “wanting” for foods and evaluate their interaction with regulatory mechanisms of hunger and satiety, relevant to clinical issues. “Liking” mechanisms include hedonic circuits that connect together cubic-millimeter hotspots in forebrain limbic structures such as nucleus accumbens and ventral pallidum (where opioid/endocannabinoid/orexin signals can amplify sensory pleasure). “Wanting” mechanisms include larger opioid networks in nucleus accumbens, striatum, and amygdala that extend beyond the hedonic hotspots, as well as mesolimbic dopamine systems, and corticolimbic glutamate signals that interact with those systems. We focus on ways in which these brain reward circuits might participate in obesity or in eating disorders.

You may also be interested in these two book chapters:

A vital question concerning sensory pleasure is how brain mechanisms cause stimuli to become pleasurable and liked. Pleasure is not an intrinsic feature of any stimulus, but instead refl ects an affective evaluation added to the stimulus by the brain. That is, as Frijda expresses it (Frijda, this volume; Frijda, 2006), a pleasure gloss or hedonic value must be actively ‘painted’ on sweet or other sensations to make them pleasant. Brain mechanisms of pleasure, whatever they are, must take a mere sensory signal and transform it into a hedonic and ‘liked’ reward.

Finding the brain mechanisms responsible for painting a pleasure gloss is a major challenge for affective neuroscience (Barrett and Wager, 2006; Berridge, 2003b; Damasio, 1999; Davidson, this volume; Davidson and Irwin, 1999; Kringelbach, 2005; Kringelbach, this volume; LeDoux, 1996; Panksepp, 1991; Peciña et al., 2006). Fortunately, progress on fi nding hedonic generators in the brain is being made. In this chapter we focus specifi cally on the neuroanatomical hedonic hotspots in the brain where neurochemical signals actually contribute causally to the generation of pleasure.

Pleasure is not a sensation. What is it then? Nico Frijda's answer in the "pleasure questions" section of this book (which he suggested a number of years ago) epitomizes an emerging consensus among many psychologists and neuroscientists (Frijda, Chapter 6, this book). He notes that pleasure "is a 'pleasantness gloss' added to whatever is pleasant". [...]

Here we ask: how is a "pleasure gloss" encoded in brain activity? Where in the brain is this glossing operation performed and how does it work? Is it possible for neuroscientists to recognize the signature patterns of neural activity that represent a pleasure gloss? These are difficult questions that are only beginning to be addressed. The "pleasure gloss" metaphor, applied to the transformation of neural signals for a stimulus, is like a varnish that is applied on top of a dull object to transform it into a shiny one. Adding hedonic tone to the signal passed on to downstream structures, the neural gloss effectively gives the entire brain a "rose-tinted" hedonic perception of the stimulus as pleasant.

In the context of neural firing signals, our idea is that a particular pattern of neuronal spikes or action potentials in crucial neurons may apply a glaze of pleasure on what might otherwise be an ordinary sensation or action signal.

To add to yamad's answer (which is pretty good), for about a decade, the way pain was thought to lower the effect of rewards is by tonic release of dopamine; in contrast, pleasure/reward triggers phasic release of dopamine. If you want an (imperfect) electrical analogy, the tonic release is the "DC" level and phasic are transients or spikes on top of that. More correctly:

Tonic dopamine activity refers to the level of extrasynaptic dopamine that is present at a steady-state concentration in the extracellular space. [...]

Increased tonic dopamine is known to result from prolonged stress or pain, a mechanism that might have evolved to ensure rest and low activity levels during injury.

And among the refs cited in support of that is a (pretty highly cited) experiment of Floresco et al. (2003):

That was the view circa 2008. A 2016 review paints a fairly different picture (citing only post-2009 primary studies for this update): 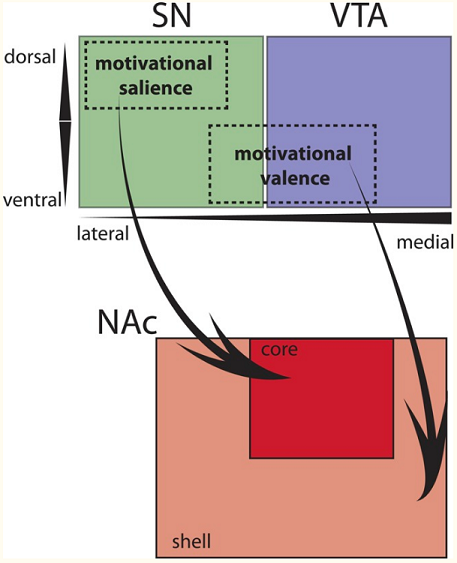 It's anybody's guess if this is the correct/complete picture. Time will tell.

One open problem remains though: how are pain and pleasure balanced by the brain? For example, we expect that an organism could tolerate mild pain in order to reap a reward. Where is this balancing decision made? A tentative answer comes from the authors of the aforementioned review, who in a newer (2017) empirical study found that the decision area in this case is the medial orbitofrontal cortex: 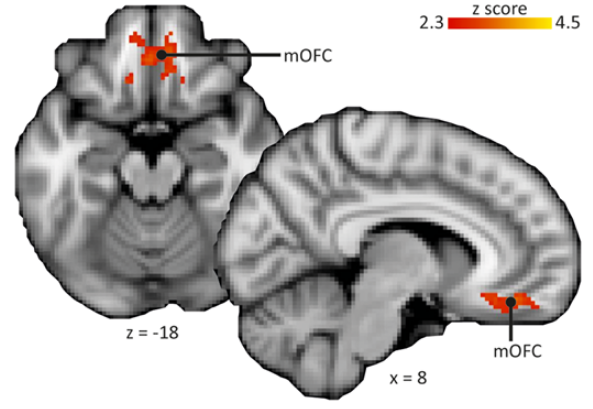 Alas this latter study used monetary rewards, so it's not terribly clear how well its result applies to lower species.

And on a really interesting [for me] research side, in some species dopmamine signaling not only alters behavior but induces morphological changes in response to the environment; examples include both predator (e.g. Echinoid larvae) and prey (e.g. Daphnia) changing their morphology in reaction to prey/predators via dompamine-mediated pathways. Although not obviously related to predator/prey behavior, but to the wider environment; dopamine mediates myopia (eye growth) in humans and other species.

Finally, I only focused on the highlighted question at the end of the questotion-body. Your title question is actually substantially broader.

Just with respect to the rewarding side: liking and wanting are thought to have substantially different neurobiological circuitry, cf. the [highly cited] review of Berridge et al. (2009) (whose closely related work Kaj's answer indicated).

4
What are the neurological mechanisms behind risking one's own life for another?
10
Non coitus sexual activity and the brain
3
What is the difference between a biological and behaviorist perspective in psychology?
2
What is the purpose of non-spiking and anaxonic neurons?
4
How does the brain project pain on to a particular part of the body?
6
How are tactile pleasure and pain differentiated in the somatosensory cortex?
3
How is Pain Subjective and Different from Nociception
2
In principle, could a brain be rewired to experience more pleasure and/or pain?
0
What is "required reading" in training that describe mechanisms behind learning?