Is the ability to discern between living and non-living things learnt or innate?

This question What optical features do we use to distinguish “life” from “non-life”? on Philosophy SE prompted me to write this question.

The question poses, do we recognise a living thing, from what we already know to be a living thing. I am posting some of this to give a background of what prompted this question.

I quote from the original question:

Imagine you see a picture of a tiger: You instantly recognize it being a living thing, more specific: Something you call "tiger". You have seen tigers before (or at least heard of them and saw pictures or so). You have some kind of (vague) concept of what a tiger might be and this thing fits perfectly in it. And you know that a tiger is a living thing and you believe that what you see is a tiger: So you believe that the thing you see is a living thing called tiger.
...

What exactly are the features we all recognize living things kind of accurate (even though when they don't exist in reality and are, just like the Nasobēm, just imaginary animals someone invented)?

I have modified this question to ask:

Is the ability to discern between living and non-living things learnt or innate?

In the original question the OP includes an image of a 'Nasobēm', a make believe creature that looks a little squid like.

Human beings are wired to innately discern living from non-living things. It does not need to be taught. There are no particular features, other than it is living and human beings are capable of perceiving this. It would appear it has nothing to do with conditioning or experience (except for the sake of providing words of other similar things to provide a description).

As to why this is innate, requires further investigation.

There are two theorised models of memory which pertain to the recognition and distinction between living and non-living things, both involving semantic memory.

What optical features do we use to distinguish “life” from “non-life”? perhaps is a little ambiguous, but we do process a lot of information and memory through our visual cortex.

Semantic memory is created through the vision, naming and functionality. Non-living things tend to be remembered semantically for their function. Whilst living things are processed more through vision and the names attached, and learned semantically.

Given this, it would seem, our brains are wired to automatically perceive and discern the difference between living and non-living things. So, even when shown a picture of a living creature, never be seen before, it is still instantly recognizable as a living creature. Just as the a person first recognizes each living creature they encounter in their lives, either in real life of through images.

There is a first time to see a tiger or a squid and the human being innately distinguishes this as a living thing. Just as they would the first time they see an image of a Nasobēm. Even mould, moss, fungus can be perceived as living (an eclectic example of unusual contenders).

Conversely, the first time an individual sees a rock, or a rocket, they can distinguish this as a non-living thing. Just as the first time someone sees an image of a flying cars. It does not have to exist to be distinguishable from living/non-living.

... the most straightforward in­terpretation of the double dissocia­tion between knowledge of living and nonliving things is that these two bodies of knowledge are repre­sented by two separate category­ specific components of the func­tional architecture of semantic memory. (1) 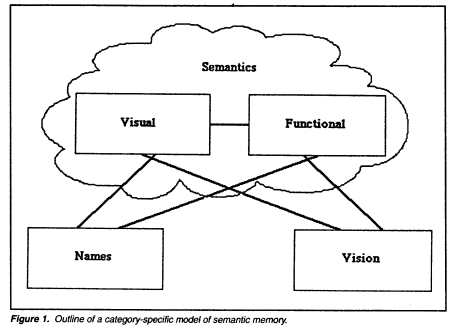 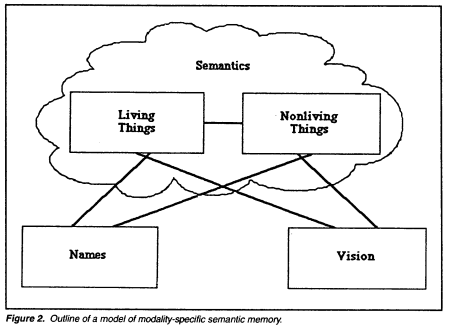 This being said, convoluted or abstract art work, could, possibly, be an area of crossover depending upon the individual's cognitive processes and so interpretation of lines and movement and what may appear out of a mess, as threatening. This is totally another topic altogether and my own hypothesis.

It is innate because innate abilities are required for survival and you can't survive if you can't recognize anything.

It results from the ability of living things to feel the life force. We instantly recognize the difference of life force between a teenager, a sick dying man and a healthy but old man. If we weren't living so distant to nature we wouldn't be visually fooled by artificial or virtual life forms.

That was about differentiating livings from deads. Now if you meant differentiating livings from objects, it's simpler. Living things have features required for life. For animals it's eyes, mouth, nose, ears, head, paws, tail (all more or less developed) and they move. For plants it's even simpler: anything brownish that has a tree structure and greenish leaves at the tips.

6
Why do some people seem to disregard the choice of doing nothing (The Zero Choice)?
6
Why is it common for people to default to a single causal source to explain new phenomena?
2
Is this optical illusion the visual equivalent of binaural beats?
6
Quantify degree to which non-diagnostic features bias category-present response
3
Failing to recognise one's own work
14
Is remembering a list of words an example of semantic or episodic memory?
8
How to recognize people with high need for cognition?
4
Is there a non-interactive alternative to the concept of SuperMemo/spaced repetition?
1
Is there any research of spelling errors from a dual-process theory perspective?