Are spaced flashcards effective for learning?

Several apps and sites offer flashcard-based learning that repeat the cards you do poorly on over a period of time (the more inaccurate the answer the closer to each other the repetitions are). One example of this is Super Memo.

There's lots of research out there on flash cards and they are a proven, effective study aid.

Flash Cards work because of the "Forgetting Curve"; rehearsal and retrieval before you forget an item strengthens the memory before it decays allowing one to optimize encoding into LTM. 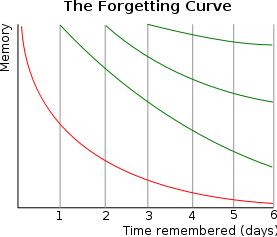 The paper Optimising learning using flashcards: Spacing is more effective than cramming is a good summary of why Spacing helps retention, highlighting why it's effective in education and should be emphasized over cramming, which current educational models (finals, tests) currently promote.

Spacing is effective for Long Term Memory as opposed to cramming/massing which is only effective (but it IS effective) in the short term as shown by the above forgetting function.

Both of these reasons have been demonstrated to enhance learning.

Retrieval practice, sometimes called the testing effect, has been shown by Roediger and colleagues to promote learning above and beyond additional study. For instance, in a 2006 study by Roediger and Karpicke, some subjects studied material several times then took a test (SSST, where S = study and T = test), whereas other subjects studied material less then took a several tests (STTT). After a brief delay, memory was shown to be better for those who had self-tested relative to those who hadn't. In a 2007 study by Karpicke and Roediger that actually used flash cards, the memorial benefit was always greater when individuals self-tested rather than merely restudied -- and importantly, best when individuals continued to self-test even when they thought they had the information down cold. This suggests that you shouldn't "drop out" flash cards from the deck if you get them right once or twice. Another 2006 Roediger and Karpicke paper provides additional evidence in more applied contexts.

The spacing effect is also a powerful influence, here, as well. Research by Bjork and colleagues on a parsimonious (yet slightly circular) idea called desirable difficulties provides one theoretical example for why this is so. Learning is most powerful when it is most difficult, and spacing out your study (or, as above, your test) provides that information with time to decay (or be interfered with by other memories) such that when retrieval is successful, it is rather potent. Note that one concern with spacing is that if study is pushed too far out, successful retrieval cannot occur, leading to no benefit to memory.

Not the answer you're looking for? Browse other questions tagged learning memory mnemonic encoding or ask your own question.

15
What is the optimal repetition pattern to maximize long term memory?
12
Compared efficiency of different spaced-repetition memorisation techniques
5
Does studying flashcards, both front to back and back to front, decrease retention opposed to only memorizing one way?

12
Compared efficiency of different spaced-repetition memorisation techniques
5
Effectiveness of spaced learning when the data have personal meaning
6
Do hints improve memorization when using spaced repetition?
4
What are the most effective psychological techniques for unlearning information
3
Is practice more effective if spaced over time?