When is higher confidence predictive of less accuracy?

Normally, when an individual is more confident in a particular response (e.g., memory decision, general knowledge answer), he or she is also more likely to be accurate. There are also studies in which higher confidence is generally demonstrated to be unassociated with higher accuracy.

Are there any studies which demonstrate that the more confident an individual is, on average, the more likely he or she is to be incorrect?

This may not answer your question directly, but is related:

Kruger and Dunning (1999) conducted a study in which people performed a variety of 'tests' in different domains, such as logical reasoning, grammar, and humor. After taking a test, participants were asked to judge their performance relative to other test-takers, and to estimate their objective score on the test (how many questions were answered correctly).

What they found was that the subjects who performed the worst actually overestimated their performance the most. If you take their performance estimate as a proxy for confidence, then it supports your hypothesis-- but only to a relative degree. That is to say, participants who performed poorly did not estimate their ability to be better than good performers and vice versa; however, those who performed the worst were more confident in their ability. It's a bit confusing, and D&K can explain it better-- there's actually a paragraph in their article (second to last) which relates their findings to work on overconfidence.

The explanation that Kruger and Dunning give for this effect is that the metacognitive ability to assess one's performance is a correlated with actual performance on the same task. Thus, somewhat paradoxically, those who perform poorly may be unaware of their poor performance, due to their inability to predict how well they did. 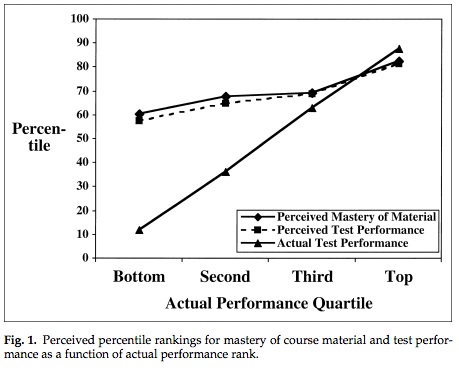 Kruger, J., & Dunning, D. (1999). Unskilled and unaware of it: How difficulties in recognizing one's own incompetence lead to inflated self-assessments. Journal of Personality and Social Psychology, 77, 1121-1134.

Not the answer you're looking for? Browse other questions tagged cognitive-psychology memory decision-making confidence or ask your own question.

7
What is the relationship between self-perceptions and actual driving ability?

23
Performance of a group solving a cognitive task: How does it scale?
8
Appropriate metric(s) for quantifying the accuracy gain obtained from averaging dyads of estimates instead of adopting individual estimates?
9
Do people estimate combined probabilities differently to uncombined ones?
5
Is Altmann's memory-for-goals model valid for higher-level multitasking?
3
System 1 thinking and ADHD