Does initial 0-3 years of age have any effects for a permanent bonding to happen between the parents and their children?

My brother (age: 37) is least attached to our parents. At the time of his birth, our parents had left him with our grandmother. He saw our parents, for the first time, at the age of 3 years. He has lived with them after that till his high school.

I was wondering whether initial 0-3 years of age have any effects (positive/negative) for a permanent bonding to happen between the parents and their children? Or it isn't about age at all?

~ Firstly I would like to say that there could be many factors as to why your brother is least attached to your parents, that may have nothing to do with the separation between 0-3 years. ~

For the purposes of keeping this succinct, I will discuss only the effects of bonding from 0-3 years of age.

This is an interesting question, as much research has been done on the effects of child abuse and neglect on attachment, in this case you are discussing a (I'm assuming) healthy child from within a loving family environment.

A number of factors would also affect the attachment of such as child, in terms of why he was separated from his parents for those years.

Firstly there is no denying that the first three years have significant affect on how brain development, including attachment styles.

I have added yellow boxes for highlighting. 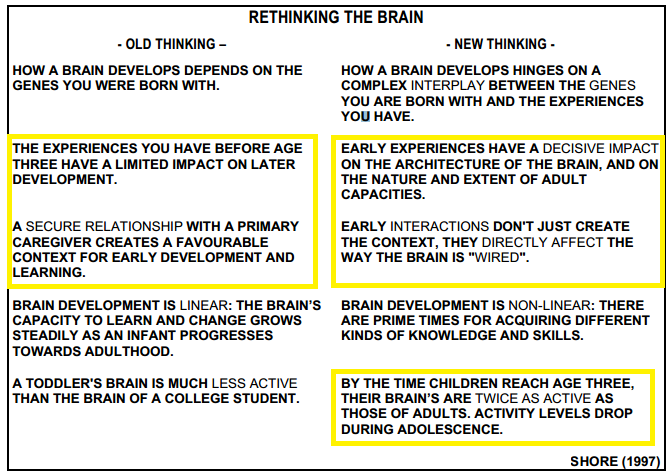 Studies would suggest that the first three years are vital for forming attachments with caregivers. A child cannot form an attachment with someone they have not met.

A central component of attachment theory is the notion that caregivers must be present and accessible in order for their children to become attached to them. (1)

His early work demonstrated that separations as brief as one week in duration could negatively impact the quality of the relationship between mother and child (Bowlby, 1969/1982). (1)

So the same theory would apply for other caregivers in the first three years of life, in this case the grand parents.

According to attachment theory, a secure attachment is derived from the child’s appraisal of his/her mother’s (or other attachment figure’s) availability. (1)

At this age, a child is not able to reason and can only process experience emotionally, so any parental absence is beyond comprehension of the child. The more damaging aspect of this, however, is the removal of the child at the age of three years from his/her primary caregivers (in this case the grand parents). I do not know what the situation was after your brother was returned to his parents, so it would be conjecture to discuss this in any detail.

As previously mentioned, the reason for the separation, where the child stayed, and who provided care are all potentially informative for helping to understand the effects of separation on parents and children. A maternal separation is quite likely not as distressing to an infant if he/she is left in the care of another attachment figure to whom he/she is securely attached (1)

An observations, it is even shown in cases where children are left in abusive homes fare better with attachment styles than children who are removed and placed into foster care. Given this, the disruption to early relationships between child and caregiver is significant and has long term outcomes; in this case, the long term effect of such absence would damage the attachment to his parents.

Not the answer you're looking for? Browse other questions tagged social-psychology developmental-psychology parenting or ask your own question.