Why does staring at a single point make it easier to balance on one leg?

If I'm trying to put a shoe on while standing with one leg, it's easier to maintain balance while staring at a single point (e.g., on the ground).

Why does staring at a single point make it easier to balance on one leg?

Vision and balance are linked

Vision and balance are connected within the brain. Balance is not something that the brain determines, is learned, "this way is up" and never revisited- like this smell = coffee, this sound = a bird; it is a continual process of biofeedback.

Balance is the result of several body systems working together: the visual system (eyes), vestibular system (ears) and proprioception (the body's sense of where it is in space). Degeneration or loss of function in any of these systems can lead to balance deficits

We use our surrounds as a frame of reference, for our internal spirit level. Maintenance of an accurate spirit level involves continual measurement and feedback between the visual and vestibular systems, they are connected via the vestibulo-ocular reflex. When vision remains fixed upon an object, balance is achieved by the eyes moving to counteract the body's movements. These processes are interdependent, happening simultaneously, as the neurons that are stimulated within the visual system causing the neurons within the vestibular system to fire and vice versa.

Or simply put; Movement is detected by the vestibular system, and the eyes give a plane of reference, offering proprioception.

It could be likened to axes on a graph, and both dimensions (vision and vestibular) are needed to plot the point of proprioception.

The vestibulo-ocular reflex (VOR) is a reflex eye movement that stabilizes images on the retina during head movement by producing an eye movement in the direction opposite to head movement, thus preserving the image on the center of the visual field. For example, when the head moves to the right, the eyes move to the left, and vice versa. Since slight head movement is present all the time, the VOR is very important for stabilizing vision: patients whose VOR is impaired find it difficult to read using print, because they cannot stabilize the eyes during small head tremors. The VOR does not depend on visual input and works even in total darkness or when the eyes are closed. 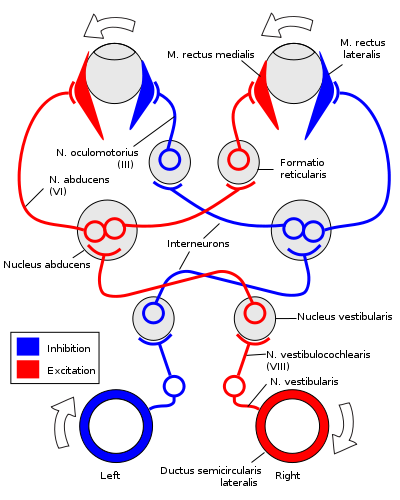 An integrated view of balance:

The vestibular system works with other sensorimotor systems in the body, such as the visual system and proprioceptors in muscles and joints to check and maintain the body’s position at rest or in motion. These systems enable individuals to maintain a steady focus on objects even when body position changes and to safely maneuver in the environment.

As we read and move our heads, our gaze is held steadily and we are able to continue reading uninterrupted thanks to the VOR. Given any alteration within the visual system, results in an alteration in our vestibular system and vice versa; when attempting a task that requires difficulty in maintaining balance, if the vision remains steady, as in constant upon an object, the vestibular system is able to measure (or locate) the body's proprioception and make adjustments to keep the vestibular system in the required plane (like the spirit level being kept level). So the effect is, we have one constant, vision and two variables; vestibular and spatial awareness.

Given the fluid nature of how the brain achieves balance; if the eyes were flitting and the visual field was varying, we have three variables. Mathematically this becomes a more complex formula for the VOR to determine where the body is spatially.

Interestingly, uncorrected poor vision can also cause poor balance when the eyes are closed.

... visually impaired individuals and those with uncorrected refractive error — those who could benefit from glasses to achieve normal vision but don’t wear glasses — have a significantly greater risk of diminished balance with their eyes closed on a compliant, foam surface than individuals with normal vision. (UC Davis Health System)

The link between balance and vision is an area of ongoing research.

This answer is going to be pure speculation as I don't have any references handy, but I would argue that fixing gaze on a single spot in the world provides three separate benefits for balance. All of these benefits are related to the fact that when you are not moving very much, fixating your gaze on a single spot in the external world also tends to "lock" the head, neck, and trunk into a single pose.

So, my argument here essentially boils down to the idea that by locking down the head and neck, fewer dynamic translations between reference frames are needed to compute the direction and magnitude of the control signals for maintaining balance. As a practical demonstration of this effect, imagine (or try, if you have lots of cushions around you) standing on one leg while shaking your head back and forth!

This argument breaks down if you imagine turning your head upward to watch a fixed spot on the ceiling while tying your shoe ; probably it would be harder to maintain balance in such a pose, even though the head and neck are fixed. So part of the maintenance of balance also seems to be having some sort of "canonical" or "easy" pose for your body to control, so not just any head-locked pose will do. But I think the fixed-head argument is a useful way to think about the issue.

Not the answer you're looking for? Browse other questions tagged motor eye-movement vestibular-system or ask your own question.

16
Has anyone formally tested Josh Pellicer's theory on human sexual behavior?
4
What is the relationship between top-down mechanism and priming the visual system in the following experiment?
3
Can signals from the prefrontal cortex alone trigger a readiness potential in the pre-supplementary motor area?