Why do people get syllables mixed up when trying to recall words?

This question is related to this question. It could be a dupe, but I am more interested in whether this is a form of "dyslexic" thinking (for want of a better expression)?

I posted this question on SE English:

Where I could not recall the word deleterious and was remembering it as: detiliorate (a non-existent word). I was miss remembering the order of the syllables. plus some other confusion.

Why do people tend to get sounds mixed up in this way?
What is the process behind this?

One way of thinking about speech production is using a spreading activation architecture. Say I want to produce the word "rooster." I have a meaning to be expressed (feathery avian animal loud...etc). These semantic representations send activation down to various matching words (bird, rooster, chicken...etc). As these words collect evidence for themselves, they send activation down to their corresponding sounds (bird sends activation to the sounds /b/, /r/, and /d/; rooster sends activation to /r/, /u/, /s/, /t/ ..etc). Once any node (word, sound..etc) receives enough evidence for itself, it is selected. There are nuances about how and when nodes become selected and how activation is passed, but this is the gist. In addition, there is noise in the system based on words that were previously said, upcoming words, words that are semantically related and so on. This noise introduces the possibility for speech errors. Some errors are more likely than others depending on the amount of evidence they have collected. For example, in the example I presented here, the /r/ sound got more activation than the other sounds because it is collecting activation because it appears once in the word 'bird' and twice in the word 'rooster.' This sound might be more or less likely to be produced erroneously compared to sounds like /s/. These error probabilities explain why we are more likely to make real word errors, and why tongue twisters are so tricky. See the following article for more information.

No this is not dyslexia and depending on the frequency it can be normal or abnormal. Its called aphasia and in adults it may be triggered by many different things. The primary explanation for chronic Aphasia is brain damage as per Neurolinguistics. However your limited example of aphasia was more likely caused by anxiety, lack of sleep, low blood pressure, hypoglycemia or any of the myriads of things which cause cognitive process anomalies.

Bellow is Figure 54-3 from Disorders of Languages: The Aphasia which represents the process of language formation. It is my contention that in addition to permanent brain lesions temporary disruptions of pathways caused by abnormal states of neurochemicals, nutrients and electrical signals trigger symptoms which can only be quantified as aphasia or aphasia like as well. Evidence based medicine reflects this by listing aphasia as some of the symptoms for hypoglycemia especially in diabetes, sleep deprivation, anxiety, low blood pressure. Of course I must mention Alogia in schizo typical patients showing the long and brief psychotic episodes cause temporary aphasia as well. 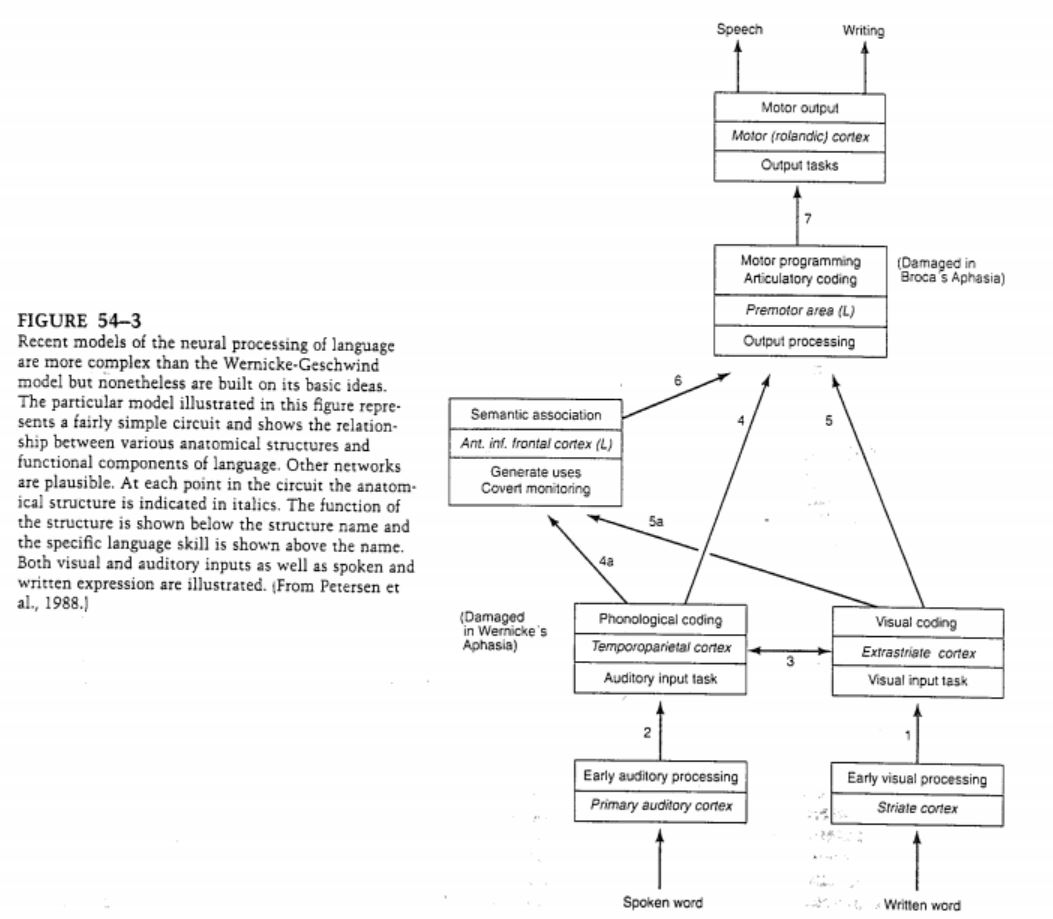 22
Is there a term for trying to remember a word, but only remembering its first letter?

12
Why is recognition easier than recall?
7
Is it easier for people to remember longer words than words mixed with symbols?
14
Is remembering a list of words an example of semantic or episodic memory?
1
Is there a technical term for when the brain recalls an incorrect, but almost correct answer when trying to recall a word/name?
7
What if people understand or interpret words differently in their mind?
9
Why do people have different personalities when speaking different languages?
0
What are science-based methods to memorize large sets of best practices?