I just stumbled on this summary in Slate of a study by Borjas and Doran (2012, FULL TEXT PDF).

To quote the summary:

According to a new study by Harvard's George Borjas and Notre Dame's Kirk Doran of recipients of the Fields Medal, the most prestigious prize in mathematics, winning big actually kills productivity.

Mathematicians who win it publish far less in the years afterwards than similarly brilliant "contenders"—highly cited mathematicians who won other prestigious awards before the age of 40 (the cutoff for the Fields), but not the prize itself. The prize is awarded every four years to two, three, or four mathematicians. It goes to show that major awards and recognition can have unintended consequences 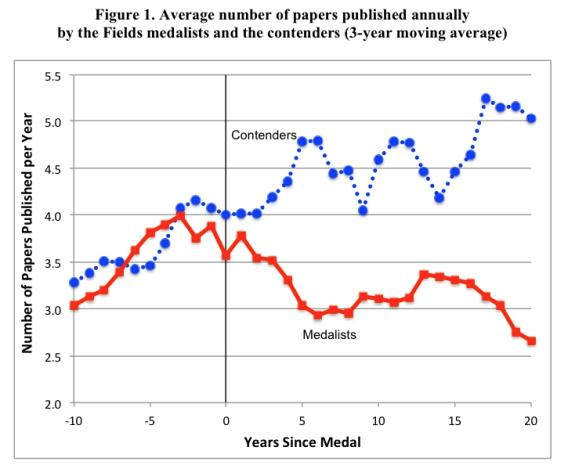 I have not yet read the paper. But my first thought would be that a lot would depend on how you define contenders. I also imagine that the criterion of interest is research achievement, and that number of papers is an imperfect index of this.

Browse other questions tagged motivation performance io-psychology or ask your own question.

9
Does the concept of employee engagement add anything over and above traditional concepts?
3
Does the “use it or loose it” principle apply to the brain?
5
Does personality imply an inclination to be an expert in one field or average in “all” fields?
15
What does cognitive science say about whether to learn mathematics top-down from research papers?
6
Psychologically, how does volunteer work help the volunteer?
10
Has there been any research done that contrasts point-based and achievement-based gamification methods?
3
Does the time required to read a word grow linearly with the number of characters?
2
Does the meta-analytic literature overestimate the relationship between conscientiousness and job performance?
2
How does the Thomas-Kilmann Conflict Mode Instrument relate to the Big Five?