Why do we not remember things from the first couple of years of childhood?

As parents of a soon-to-be three-year-old, my wife and I spend a lot of time planning activities and trips for our son. However, my wife wanted to hold off on some of the big ones (i.e. Disney World), until he was "old enough to remember".

She explained that she was taught (she has a background in Psychology, but has been working in more administrative roles than clinical for quite some time) that people cannot remember things that occur before they are somewhere around 3-4 years old.

What is the mechanism behind this? Is it safe to assume that some developmental cognitive milestone(s) that must be reached before memories persist?

Well, I have some few memories of my very early childhood, but it is undisputable (and the articles quoted by PEEJWEJ don't dispute it either) that most children don't remember most things from their earliest years. The number of events that adults remember from their childhood, and the memory span of a child, clearly increases with the age of the child: 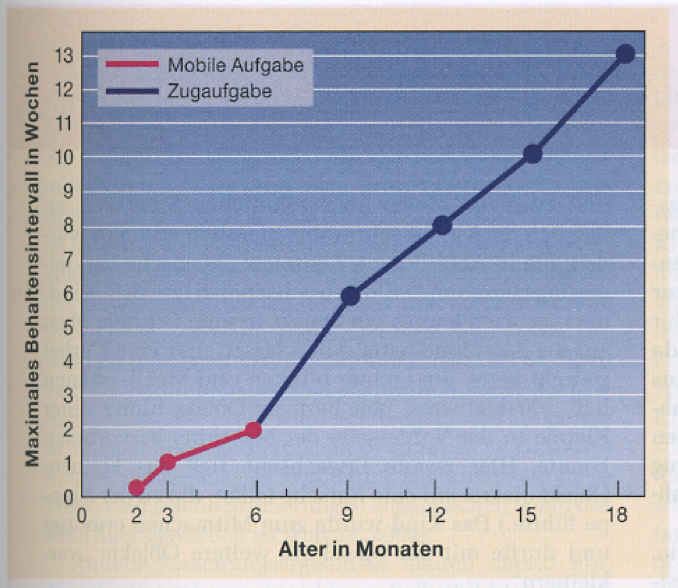 Maximum memory span in weeks (on y-axis) by age in months (x-axis) for operant conditioned tasks. From chapter 5.2 in the German edition of Berk, L. (2010). Development through the Lifespan (5th ed.), Pearson.

As for why, the reason is very probably four-fold:

(1) At birth, the brain is not yet fully developed. Areas which play a role in memory (like the frontal lobe), are still growing.

(2) Memory needs understanding. We don't just memorize sensory input, but the results of the processing of these inputs. If we don't yet understand the world and cannot process the sensory input, it cannot be "elaborated" and memorized. Another similar opinion is that we need a sense of self that we can relate our experiences to, and small children lack this sense of self.

(3) Because small children cannot yet speak, their memory is purely non-verbal. Adult memory is in large parts verbal. This discrepancy might make it difficult for the adult brain to access those non-verbal childhood memories that are in fact still there. [I don't believe this, because much of my mental processes today are non-verbal. Maybe I am different than the average person in this, but verbal thought does not play such an overwhelming part in my brain.]

(4) During later childhood and adolescence large parts of the neural structure are being degenerated (around age 6) and restructured (adolescence). During these processes, information that is not used, gets lost. [Anecdotally: I clearly remember a childhood memory I still had during my teens. I could "see" the scene in my mind's eye. Today, that memory is either lost or unaccessible to me. I only have a memory of the memory.]

This is what I remember from and looked up in some text books on developmental psychology. All of them are a few years old and not completely up to date with recent research, so there might be more and different information in journal articles. Anyway, I guess this can serve as a starting point for other answers.

If you have the English edition of the book by Berk, feel free to replace that image. Wanted to post another graphic that shows the development of different functions of the brain, but there is too much German text in it to make it useful for an international audience. Again, feel free to supply images of your own and edit them in, if you have any.

It seems this "fact" is becoming more debatable. This article and this article might clear up some misconceptions and confusion about this issue.

It's incredibly difficult to say anything about memory that applies to all situations. Each person will remember different things for different lengths of time, but often it is not based on some aspect of development or age. It seems to be based more on how often the individual recalls the memory, essentially cementing it and exercising the brain's pathways to that memory.

The following may be more of my opinion than anything, but it seems the reason most people don't recall anything before 3 is not an issue of being unable to remember, but that the way a 2 or 3 year old experiences something is not memorable to older individuals. The second of the above articles talks about people who do remember things from very early, and it's things like

""One child remembered playing peek-a-boo with her grandfather around her mother's pregnant round belly," Peterson told LiveScience. Another remembered waiting for a bus with her mom and there was a flower growing up through a crack in the sidewalk."

Not exactly the most enthralling memory that someone would share with their friends or family. Since memories, similar to skills or abilities, generally fall in the "use it or lose it" category, It seems reasonable to think that the reason most people don't remember early memories is simply because they don't have a reason to remember those memories.

Not the answer you're looking for? Browse other questions tagged memory developmental-psychology long-term-memory or ask your own question.

9
How can we be formed by our childhood's environment if we don't remember much of it?

8
Why is it easier to remember the correct response for problems with many options rather than just two?
4
A psychological theory that explains why people remember only the outcome?
2
Why do I forget important things and remember things that I don't care about?
5
Is there any reason why chunking the digit span test would not help?
2
What do psychologists call the ability to quickly revise and remember things that a person had previously learnt