Are the incidents of autism spectrum disorder on the rise, or is there an increase due to better definition of diagnostic criteria? 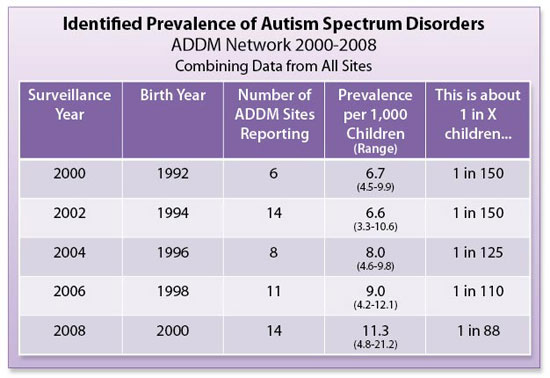 The most recent study concludes that it is likely that the changes in prevalence are due to an improved awareness/survey techniques:

While it is not possible to definitively determine the underlying reason for this trend, several previous studies that also examined changes over time in ASD prevalence estimates within selected birth cohorts suggest that increasing recognition of children with ASD has had an important impact. Evidence from epidemiologic, genetic, and neuroscience research points to the prenatal period as the key exposure window for ASD risk factors. If the causes of ASD are related to factors that exist prior to or occur just after birth, it is unlikely that changes in ASD prevalence within the cohorts of children aged 6–13 in 2011–2012 reflect ‘‘true’’ increases in susceptibility to the condition at these ages. Rather, changes in prevalence of parent-reported ASD within these birth cohorts (children born in 1998–2005) likely reflect either changes in the recognition of ASD by health professionals or survey-based measurement changes over time

However, there also seems to be a significant support for the idea that ASD is rising to epidemic proportions, and that anything from changes in how many older couples are having children to various environmental factors may be increasing the rate of ASD incidents.

These rising rates inspired Bob Wright, co-founder of Autism Speaks, to say, "We have an epidemic on our hands.... It is imperative that the U.S. government steps up its commitment to helping people living with autism today." Last November, the first congressional hearing on autism in 10 years was held to determine what the federal response should be. (It didn't exactly make front-page news: It aired on CSPAN-3.)

"Now we know there's a host of genetic and environmental factors that are likely involved," says Dr. Susan Hyman, professor of pediatrics at the University of Rochester Medical Center and chair of the American Academy of Pediatrics subcommittee on autism.

One possible contributor to autism's rise is that people are having babies later. The chance for gene glitches increases as parents -- especially dads -- age, explains Irva Hertz-Picciotto, an environmental epidemiologist at the MIND Institute at the University of California, Davis.

But delayed childbearing explains only a very small fraction of the rise in autism rates. Environmental factors may turn many autism genes "on" or "off," says Hyman.

"The best studies we have now point to things that babies are exposed to in the womb, when the brain is forming," says Hertz-Picciotto. Living in areas with high levels of air pollution (such as near a freeway), having low levels of folic acid, being overweight or diabetic, and having a high fever during pregnancy all seem to up a woman's risk of having a child with autism.

What studies or evidence support an actual increase in the rate of children with ASD? Presumably there are stronger connections to environmental factors than the infamous Wakefield study, given the comments by Dr. Hyman?

Are there studies that show a strong correlation with increased rates with changes in the diagnostic criteria, which would support the hypothesis that a significant portion of the increased prevalence is due to improvements in identifying individuals on the spectrum?

This leaves a significant proportion of the increase in ASD identification unexplained, and in need of further investigations.

What seems most intuitively to me; people did not knew about autism. With time, the awareness and diagnosis increased. Many of us know weird people who often stay alone, have communication problems, have unsuccessful life, is often pitied, bullied, called with derogatory terms. Now we know all these conditions have names.

One more factor almost nobody mentions; it has been got harder to "blend in" to a mainstream society. We are living in an age which is fast changing, unpredictable, competitive, always-connected. Social "cunningness" also got to be an important survival skill. The scenario was not such only a 20 years ago... if an adult behaved like a 12 year kid, it wont significantly impacted life, but now it does.

“I have often thought that people on the mild end of the Asperger spectrum may have fit in better years ago than they do today. An eccentric stone mason who designed a cathedral would be admired for his work. A brilliant scientist who preferred the company of mice to humans might have been considered eccentric, but not necessarily labeled socially dysfunctional. In many ways, today’s “always connected” society has put more social demands on people, and a lack of social ability may be seen as more of a handicap than in the past.” — Temple Grandin (The way I see it)

Clearly, it is way more harder to just blend in.

Not the answer you're looking for? Browse other questions tagged autism or ask your own question.