How effective is cognitive behavioral therapy for anxiety disorders?

How effective have cognitive behavioral therapy type techniques been shown and proven to work for anxiety based on published literature?

Meta-analyses are usually pretty accurate, as they essentially bring together the data from many studies that investigate the same topic of interest together and use statistical methods to effectively get the most conclusive answer possible, throughout all of the studies assessed, just HOW effective is a certain treatment?

For your specific question, there's one in particular that strongly supports CBT for anxiety. It looks at 71 different studies (that's a ton). It also investigates it's effectiveness in a variety of different environments and versions of it's therapy. It was even published only last month.

OBJECTIVE: The primary aim of this study was to assess the overall effectiveness of individual and group outpatient cognitive behavioral therapy (CBT) for adults with a primary anxiety disorder in routine clinical practice.

METHOD: We conducted a random effects meta-analysis of 71 nonrandomized effectiveness studies on outpatient individual and group CBT for adult anxiety disorders. Standardized mean gain effect sizes pre- to posttreatment, and posttreatment to follow-up are reported for disorder-specific symptoms, depression, and general anxiety. The mean dropout from CBT is reported.

RESULTS: Outpatient CBT was effective in reducing disorder-specific symptoms in completer (d=0.90-1.91) and intention-to-treat samples (d=0.67-1.45). Moderate to large (d=0.54-1.09) and small to large effect sizes (d=0.42-0.97) were found for depressive and general anxiety symptoms posttreatment. Across all anxiety disorders, the weighted mean dropout rate was 15.06%. Posttreatment gains for disorder-specific anxiety were maintained 12months after completion of therapy.

CONCLUSIONS: ****CBT for adult anxiety disorders is very effective and widely accepted in routine practice settings.**** However, the methodological and reporting quality of nonrandomized effectiveness studies must be improved. © 2013.

Across 71 studies, the conclusion used the word "very effective," which is very rare to see in any study in the conclusions section, especially a meta-analysis, the weighted mean dropout rate across all different types of its application was only 15.06%, AND gains were generally maintained for 12 months (maybe more, I don't have full text) after beginning therapy.

The only caveat they mention is that the methodology and reporting quality must be improved, but I feel that's a general trait that almost all studies need improvement in.
Plus when you investigate SEVENTY-ONE (71) studies, statistical laws start to take over anyway.

Based on this, I'd have to say that there is very, very strong evidence that Cognitive Behavioral Therapy is an effective treatment for anxiety disorders.

In my opinion, and as an analogy, it's almost just as if not more proven than using aspirin or acetaminophen to relieve a simple headache. It just works according to the literature, which, if you have that many studies then "routine clinical analysis" really does become reality. More and more clinical psychologists are switching over to this method or attempting to make some sort of derivative of it. 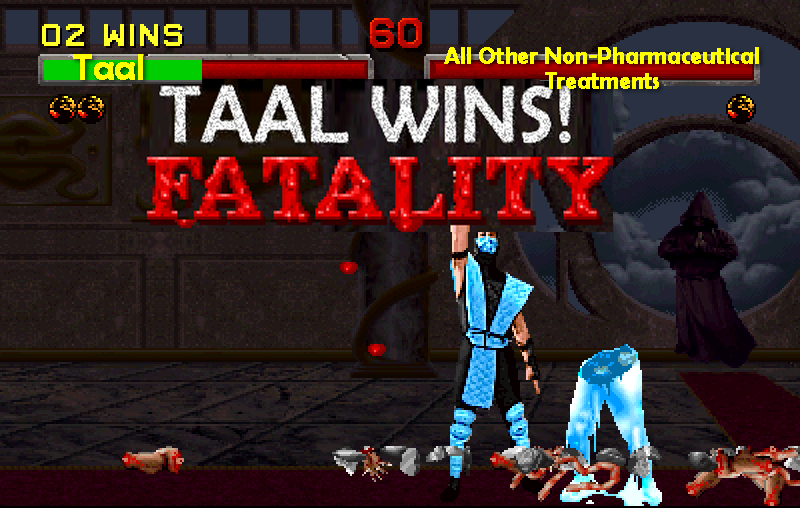 Frankly, I don't see how the meta-analysis of 70-something non-randomized studies from the self-accepted answer is such amazing evidence. On the other hand, there's a 2008 meta-analysis of just the randomized (and double-blind) studies (RCTs), and these are not so few either:

We included studies that randomly assigned adult patients meeting DSM-III-R or DSM-IV criteria for an anxiety disorder to either CBT or placebo. Of 1,165 studies that were initially identified, 27 met all inclusion criteria. [...]

Our review of randomized placebo-controlled trials indicates that CBT is efficacious for adult anxiety disorders.

The notion of placebo is however not always clear when it comes to psychtherapy; in this meta-analysis it

had to involve interventions to control for nonspecific factors (e.g., regular contact with a therapist, reasonable rationale for the intervention, discussions of the psychological problem). Placebo interventions that included active treatment ingredients for the target problem (e.g., an intervention that specifically instructs participants to engage in exposure exercises to test certain predictions or to challenge a maladaptive thinking style) were not included

Also only double-blind studies were included in these 27:

There's even a newer (2018) meta-analysis of the same kind

The purpose of this study was to examine the efficacy of cognitive behavioral therapy (CBT) for anxiety-related disorders based on randomized placebo-controlled trials. We included 41 studies that randomly assigned patients (N = 2,843) with acute stress disorder, generalized anxiety disorder (GAD), obsessive compulsive disorder (OCD), panic disorder (PD), posttraumatic stress disorder (PTSD), or social anxiety disorder (SAD) to CBT or a psychological or pill placebo condition. Findings demonstrated moderate placebo-controlled effects of CBT on target disorder symptoms (Hedges' g = 0.56), and small to moderate effects on other anxiety symptoms (Hedges' g = 0.38), depression (Hedges' g = 0.31), and quality of life (Hedges' g = 0.30). Response rates in CBT compared to placebo were associated with an odds ratio of 2.97. Effects on the target disorder were significantly stronger for completer samples than intent-to-treat samples, and for individuals compared to group CBT in SAD and PTSD studies. Large effect sizes were found for OCD, GAD, and acute stress disorder, and small to moderate effect sizes were found for PTSD, SAD, and PD. In PTSD studies, dropout rates were greater in CBT (29.0%) compared to placebo (17.2%), but no difference in dropout was found across other disorders. Interventions primarily using exposure strategies had larger effect sizes than those using cognitive or cognitive and behavioral techniques, though this difference did not reach significance. Findings demonstrate that CBT is a moderately efficacious treatment for anxiety disorders when compared to placebo. More effective treatments are especially needed for PTSD, SAD, and PD. 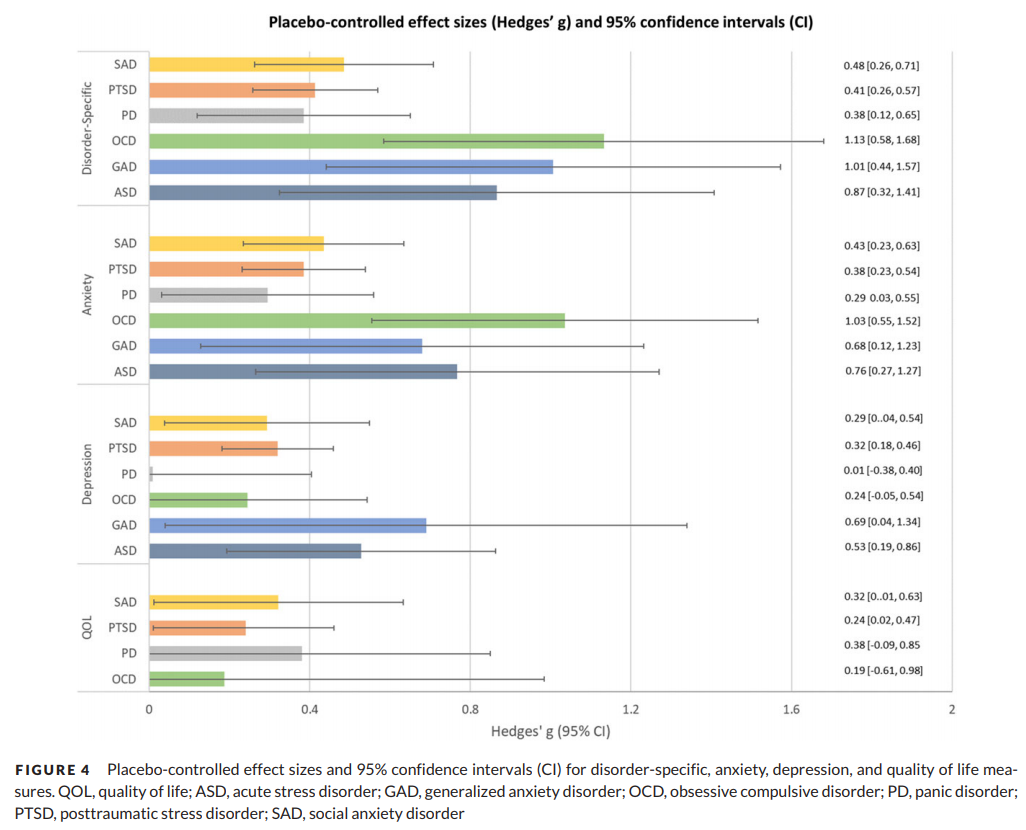 Since this 2018 meta-analysis presented itself as the successor of the one a decade before (it shares some authors as well) it still included OCD, acute stress disorder, and PTSD even though these are no longer classified as anxiety disorders in DSM-5.

It's also interesting that there few RCTs of CBT in GAD though (only 2).

the strength of the effect of CBT depended on whether the analysis was conducted on completer or ITT [intent-to-treat] samples, with completer samples producing significantly larger effect sizes, though not ORs [odd ratios], compared to ITT samples. Such a discrepancy between ITT and completer samples is particularly important given that CBT was associated with significantly greater dropout rates than placebo in the present analysis, a result not found in Hofmann and Smits (2008). Notably, this result appeared to be driven by greater dropout rates among CBT patients in PTSD studies, which has also been found in previous meta-analytic research (Imel, Laska, Jakupcak, & Simpson, 2013). Such a finding suggests that for PTSD studies, the superior effect of CBT compared to placebo may be inflated by lack of data from dropouts.

[...] only 16 of the 41 studies included used ITT analyses, and the use of completer analyses appeared to lead to greater effect size estimates. Even among studies using ITT analyses, results from our risk of bias assessment indicated that many studies did not account for missing data properly, or did not provide adequate information for why data were missing or how missing data were dealt with. Relatedly, the present results may have been influenced by publication bias. In addition, criteria for treatment response varied between studies, potentially contributed to increased heterogeneity in the effect sizes for categorical outcomes.

They also note that meta-analyses using only waitlists as opposed to more active placebos had reported even greater effect sizes:

For instance, the metaanalysis by Bandelow et al. (2015) comparing CBT to waitlist produced an overall effect size of 1.23 for anxiety disorder symptoms. In contrast, we observed that CBT was associated with an effect size of 0.56 when compared to placebo.

The metaanalysis of Bandelow et al. is also interesting in its own ways; although it targeted fewer disorders (I think they adopted to the DSM-5 view) namely only Panic disorder/agoraphobia, GAD and Social anxiety disorder, it compared treatments multiple treatments, with some interesting conclusions: 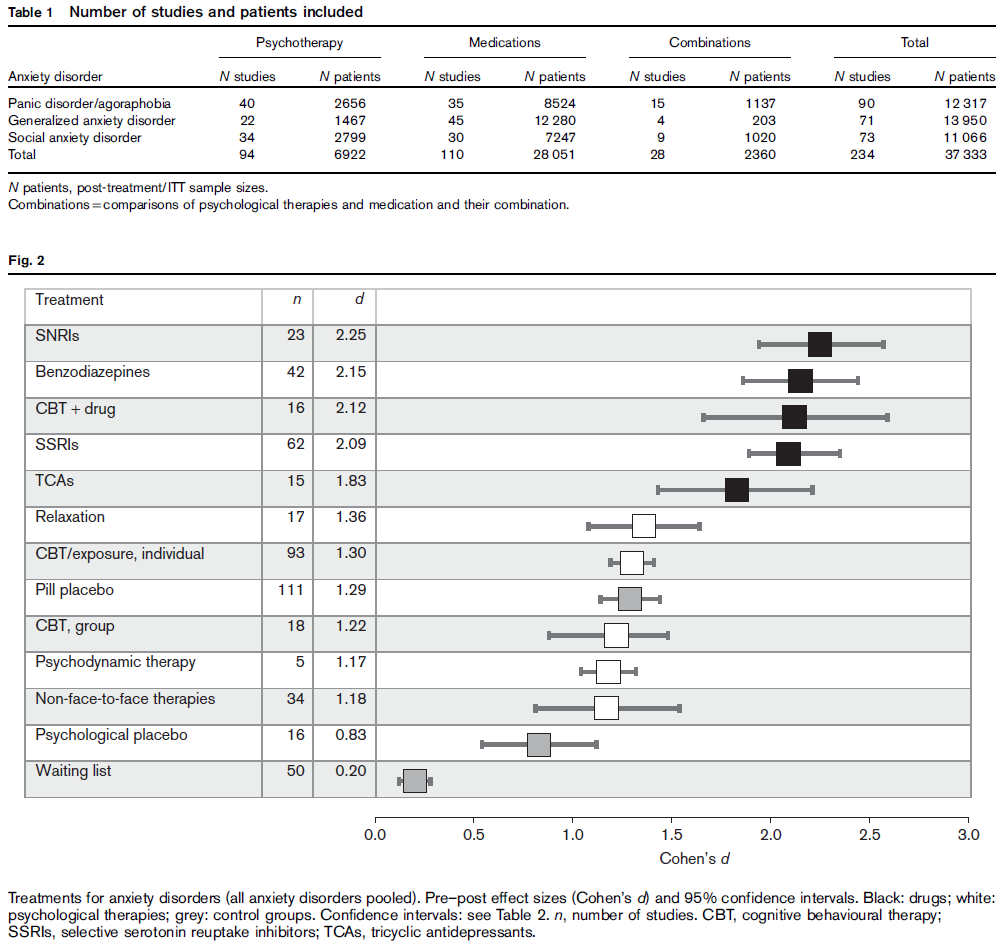 In that last table, "Fail-safe N" (number of negative studies needed to reject the hypothesis that a treatment differs from a control group) and "Egger P" estimate publication bias; the "adjusted d" is using the publication-bias-correcting ‘trim and fill’ method of Duval and Tweedie (2000). (Alas the meta-analyses of Hofmann and Smits did not report something like this.)

I can only give my experience, which is that it did not help one bit.

I had two lots of 6 sessions, and was described as a " very compliant patient"

It was like standing on a motorway trying to persuade one car to slow down, sometimes they did, but there were so many more it was exhausting.

I have no doubt it works for some, but I rather think its effects are being over hyped.

Its relatively cheap and is fashionable.....but as I said..did absolutely nothing for me and for others I know.

I guess at least it is without side effects....as long as those administering it do not see the patient as the problem if it fails.....its too easy to do that

GinarookGinarook
1
New contributor
Ginarook is a new contributor to this site. Take care in asking for clarification, commenting, and answering. Check out our Code of Conduct.
$\endgroup$
2
Add a comment  |

15
Cognitive-Behavioral Therapy Limitations
4
How effective are pharmaceutical or therapeutic treatments for jealousy?
5
What are the key predictive traits of therapeutic success?
10
Is there a conflict between Mindfulness-based and Acceptance-based Therapies and Cognitive Behaviour Therapy (CBT)?
4
Is Allen Carr's "easy way to stop smoking" a form of cognitive therapy?
3
"Do it yourself" Cognitive-Behavioral-Therapy-style intervention methods
7
Psilocybin for treatment of anxiety disorder
1
Resources about relaxation training as used in CBT