Would the Milgram Experiment results be replicated in Eastern cultures?

When the Milgram Experiment was performed in the 1960s and replicated multiple times up until the 1980s, it was performed in Western cultures. When it was replicated in 2006, it was again performed in the USA. One of the interesting observations that was made, was that the subjects in most cases, agreed to continue the shock treatments if they were reassured that they cannot be held responsible for anything that happens and cannot be sued*.

This to me, sounds to be an individualistic reaction to the experimenter's command as opposed to a collectivistic response where subjects would not only try to protect their self interests but would also act to protect the confederate being shocked from ill treatment**. Is this an accurate assertion?

Have any such studies been conducted in the East?

While I don't know of the Milgram studies being replicated cross cultural there's an older, less severe conformity study by Asch. Those use less authoritarian and more group conformity pressure.

There is a 2009 article by Burger that reportedly reviews the Milgram experiment and all known replications. You might want to read through the replications carefully to see whether any such studies were performed in an eastern cultural context. Possibly even a close reading of the studies might suggest how much results vary across settings.

I found one study by Shanab (1974) which was conducted in Jordan, although that's not exactly an eastern culture.

So on the face of it, I could not find a replication of the Milgram experiment in an Eastern context. 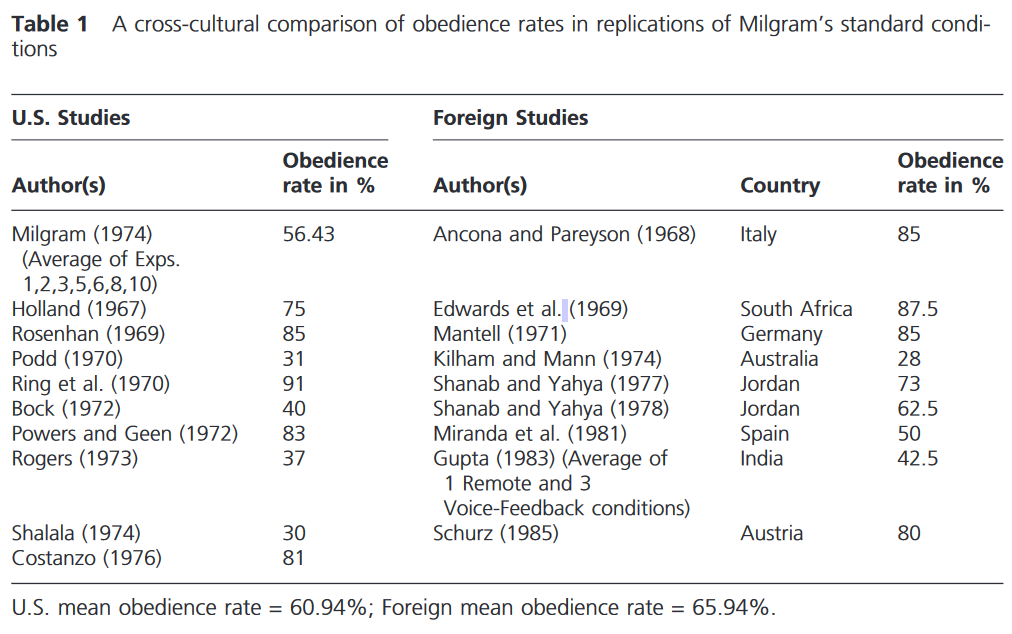 But it is from 1983. I failed to found any East culture Milgram's experiment replications after 2000.

11
How is the Stanford Prison Experiment connected to Conformity?
18
Do cultures differ in the perception of emotions from body expression?
9
What were the long-term effects on the participants of the Stanford Prison Experiment?
1
Questions of the type "What do you think he/she would think?"
4
On a variation of Trolley's problem. How to explain the survey's results?
1
Does the Milgram experiment produce different results for people who believe the final voltage is deadly?
3
Has the labelling and overshadowing effect from the Hannah Experiment been replicated?