Howe et al (2013) found that a dopamine signal becomes stronger as a goal is approached. The experiment involved rats running in a maze. If the rats were close to solving the maze, the dopamine signal became strong. The intensity of this signal did not depend on how fast the rats completed the maze.

Here is a paper that argues that dopamine signals discounted value of future returns. This is precisely what you are asking.

the authors argue, that if rewards are further away in time or space, they are discounted, and that DA release in the ventral striatum is more strongly related to this discounted value than prediction errors (current dominant theory of DA function).

I think you should take a moment to read it! It is a seminal paper that makes a profound point about dopamine function, very neatly unifying previously disparate ideas of what the hell is DA good for.

EDIT: Note: This is an answer in progress, as trying to answer your specific question has led me to finding the answer to many other questions around it, but not that specific one.

Well, when one is in the process of completing a task where they pass by, say, measurable goals, then that's just pure reinforcement and you can literally feel the dopamine pumping through your brain towards the finish line each step you take...especially as you get closer and closer towards the finish line. Everyone has experienced that.

Which actually leads me to another interesting hypothesis, I bet the graph for the dopamine signal of these rats was exponential, wasn't it? I'll go look at the graphs now and check....I seriously havn't looked at them before this. And here they are: 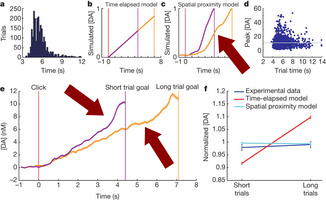 Yup, exponential curves. Interesting the DA [nM] had quite a bit slower rate of acceleration of sloping up than its partner, the shorter timed one.

Whoa, you know what's weird....(and I"m sure they mentioned this in the study too) it looks like the brains of these rats actually know where they are at in the maze after a certain common point - which looks like around 2 seconds) and then the brain increases the signal to just the right spot so that it makes that curve which is like a predefined function in their heads (you could totally regress that) so it will eventually hit a specific point at just the right spot, Nearly the same spot as the rat that had the shorter test. It's a little higher, but not that much. I wonder why there's a big peak and then a drop very end though For that lower orange one.

You know, maybe the implications for that big tip at the end right before the finish line for the orange bottom rat with the long term test could represent our (humans) misrepresentation of how we will actually feel once we accomplish a long term goal and maybe realize that it wasn't as great as we thought it would be...like getting a new car maybe. Traveling. Etc. Maybe the rat just did not perceive the work he had to put in for the longer course to be a fair trade for whatever reward, if there was any reward at the end o the test.

He saw his small plate of cheese and disappointment filled his psyched as he approached it.... :(

Great great study. I bookmarked it, then went to pubmed and realized there are HUNDREDS of studies similar to this, some even in humans, many in monkeys.

Unfortunately I couldn't find what you wanted specifically (although I did find several potential derivatives) and I gotta go to sleep - super tired. I focused more on the studies done in monkeys, which there are a ton of, even though you asked about rats due to the fact that I believe you would like a citation with a mammal closer to humans if possible.

So here's where I left off at: just keep going through the citations on the side. If anyone wants to build upon my unfinished answer with their own answer by using the research I did, feel free to. This is the way academia works most of the time anyways.

Not the answer you're looking for? Browse other questions tagged cognitive-neuroscience animal-cognition goals dopamine or ask your own question.

10
Are there any ways to increase dopamine and serotonin levels when working or learning something complex?