There is a lot of research done on impulsivity trait. Here is detailed wikipedia article and here is one interestiing video of biological and psychosocial causes of impulsivity.

In wikipedia article lot of tests are mentioned, but I am specificaly looking for:

It measure reflection against impulsivity.

Does anyone knows where to find it or how to use it or is there any substitute for that test.

The researchers that developed this task decribe it in DeVito et al. (2009) as follows:

The IST (Clark et al. 2006) is a measure of ‘reflection– impulsivity’. Subjects were told they would be presented with ten trials in each of two conditions [fixed win (FW), decreasing win (DW)] and that the task would last for 10 min. On each trial, a 5×5 matrix of grey boxes with two larger coloured panels below it was presented. Subjects were told to press on a box to reveal its colour and to open as many boxes as they chose prior to deciding which of the two colours they thought was in the majority amongst the 25 boxes. Boxes remain open for the duration of the trial to minimise working memory load. To register their decision, they pressed on one of the two coloured panels displayed. In the FW condition, if the subject chose correctly, they earned 100 points, but lost 100 points if they chose incorrectly. In the DW condition, subjects begin with the ability to win 250 points, but with every box they opened the amount they could win decreased by 10 points. An incorrect choice was still penalised with a loss of 100 points regardless of the amount of boxes opened. Therefore, in the FW condition, extensive information sampling prior to decision was optimal, whilst in order to gain points in the DW condition the subject must adjust to sample less information. A variable inter-trial interval was used such that the minimum trial duration was 30 s (e.g. if the subject responded after 10 s, the inter-trial interval would be 20 s). This feature was included to prevent unduly rapid responses leading to shorter task duration and thus an earlier escape of the experimental setting. This task is described in more detail by Clark et al. (2006).

In the present study, we used a novel Information Sampling Task (IST) to assess reflection impulsivity in chronic substance users. The objectives of the IST design were to derive a primary index of information sampling (rather than a speed–accuracy composite) in a task that placed negligible demands on visual processing and working memory. The IST presents a series of trials with an array of 25 grey boxes arranged in a 5 × 5 matrix. The grey boxes conceal an underlying assortment of squares (e.g., yellow and blue; Figure 1) on each trial. The subject was asked to decide which of the two underlying colors (yellow or blue) lay in the majority. The subject was able to open as many boxes as they wished to make that decision. Once opened, boxes remained visible for the duration of the trial to obviate working memory demands. Correct decisions were awarded a number of points, with trials blocked into two conditions. In the Fixed Win (FW) condition, a correct decision yielded 100 points, irrespective of the number of boxes opened. In the Decreasing Win (DW) condition, the number of available points decreased with every box opened. Consequently, the DW condition introduced a conflict between reinforcement and certainty: to maximize reinforcement the subject must tolerate high uncertainty, whereas sampling information until a point of high certainty would win very few points. Given preliminary evidence that drug users might be hypersensitive to reward (Bechara et al 2002 and Garavan and Stout 2005), we predicted that the DW condition would encourage impulsive responding and exaggerate individual differences. 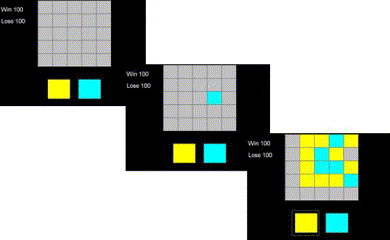 Figure 1. Screen display for the Information Sampling Task. Each trial commences (left) with the presentation of 25 grey boxes arranged in a 5 × 5 matrix, covering a random assortment of two colors of squares; these two colors are displayed on panels at the foot of the screen. When the subject touches a box (middle), it opens to reveal its color. The subject must decide which of the two colors lies in the majority on the board. They are told they can open as many boxes as they wish to make this decision. They are told to touch the corresponding panel at the foot of the screen (bottom right) once they have decided which color is in the majority.

In addition, there is a description of the Information Sampling Task in the Cognitive Atlas.

6
Can the Go/No-Go Association Task be faked?
5
Psychometric information on IPIP representation of NEO facets
3
Effective sampling rate in human visual system
8
Biologically plausible cognitive model of Wisconsin card sorting task
5
Flow diagram of how information flows through the brain?
4
Efficiency of multitasking depending on task difficulty
4
What happens at sampling rates lower or higher that the Nyquist rate?
9
What, if any, objective tests were designed for the assessment of altruism?
0
How move Working Memory (WM) span task into a VR?