Any models that act using both streams of visual processing?

The Two-Stream Hypothesis, where object properties are processed independently from spatial information, remains the most well established theory of visual processing. However, it concerns me that most models that reference this theory stop at the end of the two streams (as per the cartoon model in the image below); they never say how the mind translates those sources of information into action (i.e. the two arrows in the picture never meet). 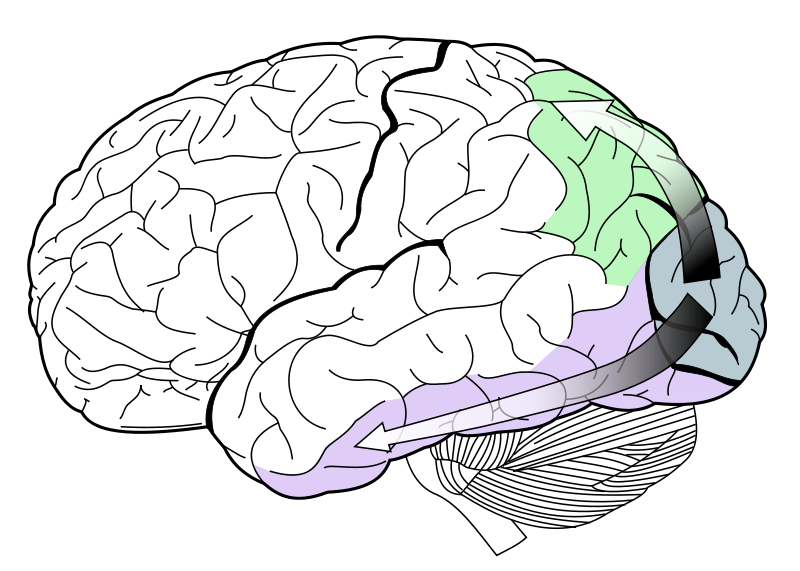 You may be interested in the FARS model from Fagg and Arbib (1999) that describes the interaction of the two visual streams in the primate brain during object grasping.

The article What Puts the How in Where? Tool Use and the Divided Visual Streams Hypothesis (2007) makes use of the dorsal/ventral streams to explain our ability to use complex tool. As Frey argues, "the ability of the dorsal stream alone to account for one of the most common forms of human action, tool use, is limited. While experience-dependent modifications to existing dorsal stream representations may explain simple tool use behaviors (e.g., using sticks to extend reach) found among a variety of species, skillful use of manipulable artifacts (e.g., cups, hammers, pencils) requires in addition access to semantic representations of objects' functions and uses."

Apart from these two domains, I can not see one that would benefit from the "full perception action cycle": one stream is usually sufficient to describe a phenomenon.

Mario Liotti and Don M. Tucker (Brain Asymmetry, MIT, 1996) attempt to explain that the 'corticolimbic architecture is not left/right, but dorsal/ventral". In their opinion, the reason for hemispheric asymmetries can be found in the asymmetries of the dorsal and ventral systems. They proposed that emotional behavior could be interpreted by analyzing the vertical circuits (dorsal/ventral).

Not the answer you're looking for? Browse other questions tagged perception cognitive-modeling vision computational-modeling connectionism or ask your own question.

10
Are there any connectionist models that integrate reinforcement and fully supervised learning?
5
Are there any cognitive models for visual navigation?
23
Applications of computational learning theory in the cognitive sciences
6
Any research on how we use visual category information in visuomotor tasks?
5
Are there any agent based cognitive models that are inspired by complex systems studies of ant colonies and economies?
8
Is there a hierarchy of gestalt visual stimuli processing?
4
What is the relationship between visual attention network and visual stream (Two-streams hypothesis)?
3
Are ACT-R and Spaun the state of the art in cognitive science computational models?