A subject in an office-building setting is asked to memorize a list of numbers and to write them down on a whiteboard in another room on the opposite side of the building.

The subject must navigate a series of hallways in order to get from the first room to the other room.

There exists a relationship between complexity of the memorization task and the choice to accept the high self-indulgence snack, such that:

Can anyone provide links or references that relate to the above hypothesis and test?

Gailliot et al (2007), didn't do it with a memorization task, but with a variety of other tasks requiring self-control:

In one of the studies they had a low temptation condition where candy was placed far away and a high temptation condition where candy was within reach. The experimenters also manipulated the availability of the candy by telling participants to either "do not touch" or to "help yourself. The participants then had to watch a 10 minute movie with the candy nearby. 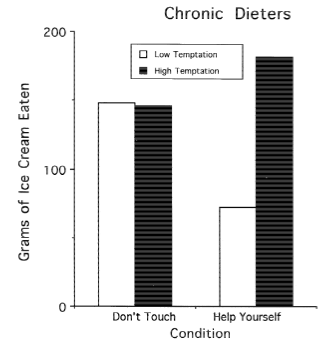 The results showed that dieters ate approximately the same amount of ice cream in the "do not touch" conditions, but ate significantly more in the "help yourself" condition with high temptation. The authors conclude that the dieters exercised so much self control when snacks were in reach and available that they had far less self-control available following the ice cream tasting.

Not the answer you're looking for? Browse other questions tagged cognitive-psychology social-psychology reference-request measurement task-analysis or ask your own question.

2
What's the human behaviour called that often makes us warp realities to appease another?