Are there useful applications for three channel consumer EEG?

I stumbled upon the consumer EEG Melon (at Kickstarter). It has three electrodes and is advertised as measuring how "focused" you are. In the FAQ it says:

I wonder: What can I measure with such an EEG? What applications would be unlikely?

The problem with this is that electricity doesn't work like that. Current always flows between two points, and our electrodes measure the potential between two locations. After its discovery by Tönnies somewhere in 1938, most EEG amplifiers have been of the differential amplifier design. That means every electrode recording is made up of 3 different sites: the Ground electrode, the Reference, and the target site. What is being reported as activity at FPz is truly ((FPz-Ground) - (Reference-Ground)).
What this entails is that our measurement at the so-called active electrode is not an isolated measure of the activity directly under that electrode alone, but a mix of the activity underlying multiple sites. So what you observe in such a setup is highly dependent on where your Reference is located. I couldn't find where the Melon's Reference sits, but it has to be somewhere on the headband. The headband encircles the skull, and all of the positions allowed by the headband are over cortical areas.
Typical locations for Reference are Cz, Nose or the average, neither of which are possible or meaningful in a 3-electrode headband context. Possibly, the reference is located over the temporal or occipital lobes.

So what the Melon will report as activity at FPz will in truth be a mix between activity at FPz, and activity at some further site also above the cortex. (It is possible they placed their Ground very close to the Reference, which is a very unusual setup ...)

Furthermore, individual electrodes never pick up isolated brain sites. Electrical fields, as those projected by cortical clusters firing in synchrony, are propagated field-like. Every recording site therefore picks up a distinct mix of all of the brain. The activity of sites closer to the electrode will be somewhat stronger since field strength falls off with the square of distance, but the part of the cortex directly under the electrode will still be overwhelmed by the summed activity of everything next to and below it.
All the more so as the strongest activity patterns of the cortex come from the occipital lobes - the so-called alpha rhythm. Alpha usually dominates the cortical activity, as it is a simple synchronized firing.

Moreover, alpha will most likely be artificially reenforced on the Melon by the site of reference, since depending on where the reference is placed, it will necessarily be closer to the occipital lobe than FPz, FPz receives alpha with the inverted polarity of most of the scalp, and subtracting from the residual inverted alpha at FPz the alpha from the reference will lead to substantial alpha effects.

Both of these problems are well known since basically the beginning of the EEG, since Hans Berger himself, discoverer of the EEG, already stumbled on the phenomenon that regardless of where he put his two electrodes (Berger never really got around to appreciating Tönnies' proposal), he'd see very similar activity. Berger's interpretation was that all of the brain partially does basically the same thing, everything in the brain is partially united by one huge common shared oscillatory pattern - alpha.
The activity associated specifically with frontal sites, especially the theta rhythm, is much weaker. Extracting just prefrontal theta activity can be a very hard task, as one can tell from the elaborate methods employed by papers trying to isolate just that, such as this and this.

What especially the second paper will show you however is the most dominant activity at FPz: eye blinks. Here I'm showing you activity from FPz in an experiment of mine. 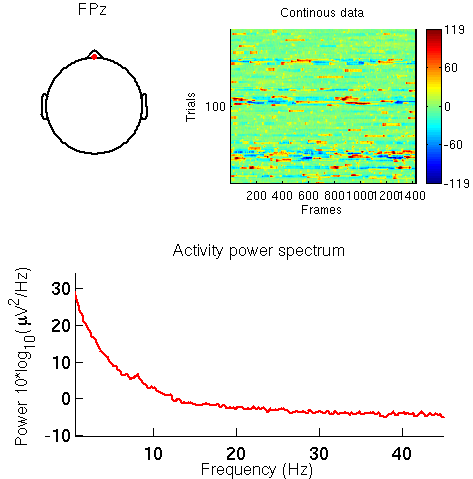 What you mostly see in the top right image are the red dots. Each of these is a blink by our subject. You see that the dots totally overwhelm the overall activity. The spectrum below gives the same information: it's a simple power-law spectrum with almost all power in very low frequencies, without a specific peak in a frequency range such as theta or alpha.

I wonder: What can I measure with such an EEG? What applications would be unlikely? How can "focus" be quantified?

Interestingly, this might even be possible, since one of the best EEG predictors of focus is alpha amplitude. The distinct prefrontal cortex signals however are not very important here. Rather, the alpha signal is.
Alpha is a very rough indicator of attentiveness, and you'll always get less information out of a single sensor than by simple introspection ("do I feel droopy?"). But you might get a rough correlate of current awareness from looking at alpha power, assuming you position the thing so you get as much alpha out of it as possible (ie., not over FPz). The research in this regard is still in the explorative stage, much before you'd rely on the systems. See for a few examples: a three-channel system like the Melon; a 4-channel system; 14 electrodes.
When I say "it is possible" to do that using a 3-channel system, I do not mean it is possible right now. Nobody has that technology yet. Rather, it might become possible in the future. Although even then I'd rather hope for a larger sensor array. Note also that these are still very rough guesses - they can tell you if you're drowsy or not, if you are currently falling asleep or not. They won't be able to distinguish more subtle states.

Would it be possible to identify (different) states of sleep?

I'll have to pass on this one. I'm not a sleep expert. I think the location of the Melon is wrong though.

Could it be possible to control a cursor/game (left/right movements)?

Possibly - if you place it so that your eye movements reflect as strong positive and negative currents. From brain activity? No. Movement decoding requires much more sensors over very different sites. Motor areas are closer to the middle of the brain, roughly speaking, and that's where you'd need very dense electrode coverage to see anything.

This type of sensor is hardly revolutionary, it seems that the integration and miniaturization are the key differences between say Melon, or this, or a 7-point sensor such as Muse, which supposedly monitors alpha and beta waves, and is already in production. Note that the 10/20 System is as old as I am: 30+ years. Additionally, it is an analog, dumb device, without interpretation or adaptive algorithms.

The most obvious non-listed application for this device is to train yourself to be a better video gamer. Seriously, the pre-frontal cortex, real time executive function, and a "focused state" would have all kinds of useful applications, especially for real-time activities involving executive function: video games, race car driving, piloting under extreme weather, or 1-on-1 sports such as tennis. This may be considered the "future" in some neuroscience textbook like the one copied and pasted above. However, this is very much reality, as the military, MIT, and other serious research institutions have been using this tech for many years for that exact purpose.

I am not a neuroscientist; I have a background in computing and liberal arts/research. However, according to: http://www.brainm.com/help/Positions_and_brain_function.htm Fp1 controls:

It appears that they are attempting to integrate a tilt sensor, which could be used to control the left-right axis, such as in a video game. The documentation and specifications are lacking or vague.

16
Is there a better way to describe brain activity than EEG "brain waves"
11
What computerized EEG analysis algorithms are there?
12
What tools are available for EEG analysis on the R platform?
4
Applications and Limitations of EEG Electrode Pooling - Averaging across time series
3
How to build a high sensitivity EEG headset for continual monitoring?
7
Suggestion for wearable EEG headset
4
Features for blink detection in real-time single channel EEG
2
EEG Equipment For High Schoolers?
1
Is there an upper limit to the number of channels in an EEG system that would provide additional useful data points?
1
What are the differences between bipolar channels and monopolar channels for EEG?