Do animals that sleep during the day have a different sleep architecture than those who sleep at night?

A typical hypnogram, delineating the sleep architecture for a (human) mammal looks like 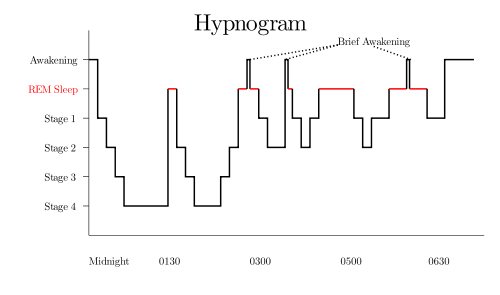 A distinct distribution of non-REM and REM sleep can be observed.

Is this pattern of sleep cycles particular to that of diurnal mammals, and if so, how would the sleep architecture of a mammal that sleeps during the daytime be different?

One study (Zhao et. al., 2010), investigating the sleep architecture of two bat species (one nocturnal, and one mixed), notes the following:

Top three rows are for the predominantly nocturnal bat C. sphinx. Note the "Wake" rows for the two species.

Not the answer you're looking for? Browse other questions tagged sleep physiology or ask your own question.

29
Can you catch up on sleep over the weekend?
23
Medium-term effects of polyphasic sleep on performance
6
Are closed eye movements related to the content of dreams or the imagination?
2
Is there an easy way to tell whether I woke up during REM or non-REM sleep?
8
What brain regions are activated when a dream is remembered?
8
If you sleep during the day, do you need less sleep at night?
3
Can meditation be associated to lucid dream?
2
Does sleep-talking typically happen during NREM or REM sleep?