How long should I work before taking a break?

I'd like to work as effectively as possible for 8-9 hours a day, whether at work or studying.

At some point in completing my major in psych I remember hearing about the importance of taking breaks while doing work (e.g., Trougakos and Hideg, 2009 on momentary work recovery). Gopher et al (1995) discuss ultradian rhythms and working for 90 minutes for every 15 minutes of break. Some methods like the pomodoro technique suggest 25 minutes of work for every 5 minutes of break, with a 15 minute break every 4 cycles.

There is research on optimal work-break rhythms. It has been found that work performance is optimized in 90 minute time slots. This is improved by dividing this into 25 minute time slots, with short breaks. With relation to the type of work, it is suggested that breaks be taken away from the working environment, optimally, within an altogether different environment.

This is consistent with natural ultradian cycles: 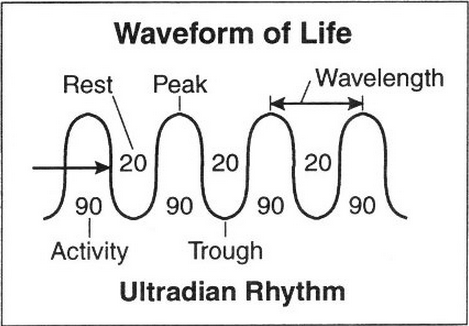 I have quoted extensively from the following article:
(2) Best Rest Practices for Optimal Productivity and Creativity.
This addresses your questions comprehensively and also confirms that an extended working day is counter productive.

Rossi champions the 20-Minute Break in his book of the same name for peak performance. And Anders et al studied in 1993 a group of violinists and discovered that the best performers practiced in 90-minute intervals and learned not to over-practice.

We can break down that 90-minute rhythm even further into 25-minute spurts. Most people can pay attention to a talk for 25 minutes (hence, the brilliance of TED Talks’ 17-minute limit).

Hence, another client, a highly reputed novelist and short story writer, wisely writes in three 25-minute periods—each divided with a timer. At the end of the third period, she takes a walk or switches to another activity

Breaks away from the workplace

I recommend to clients they remove themselves from the work environment if possible.

For a corporate client, I recommended he schedule a walk to another part of his vast office quarters, glance out a floor-to-ceiling window, and then return to his office room, sit in a comfortable sofa normally reserved for clients, and remember the last time he was outdoors working on his ranch—one of his favorite activities.

Step outdoors if you can. I suggested that one client who gets overwhelmed with multiple tasks in the afternoon to step outdoors and sit in her garden for fifteen minutes and simply observes the colors, textures, sounds, and smells. Ideally, she would weed for fifteen minutes as the physical activity more likely will let her processor mind incubate some of her creative problems.

Or step away from your work space, and read four pages from a book that brings you delight.

If you can jog or bicycle for 20 minutes, even better—as you’re also increasing the chances of your hippocampus forging new neurons in your middle-aged gray matter, according to Fred Gage of the Salk Institute and other researchers who’ve examined the benefits of intentional, enjoyable cardiovascular exercise.

DISTRACTION CAN RE-BOOT LONG-TERM FOCUS. () Here’s a mind-twister: Atsunori Ariga and Alejandro Lleras of University of Illinois at Urbana-Champaign, United States questioned the assumption that loss of focus came from, say, fatigue or lack of attention. In 2010, their study published in Cognition concluded that a deliberate distraction or introduction of a second task actually can increase vigilant attention on the first task.

Pay attention to when you need to introduce a quick second task. Maybe sending off an email or text message will free up mental bandwidth and get you re-committed to the high-thinking task. Do this in tandem with the “Break with Rhythm” suggestions above.

The benefits of a daily nap

The concept that a longer working day is counter-productive

Schedule non-digital time in the evenings, especially 45 minutes before sleep. Set up a bi-weekly schedule of evening rhythms: One Monday as “reading night,” One Tuesday as “date night,” et cetera. If you must work some evenings, schedule work evenings. Make them the exception instead of the rule.

Not the answer you're looking for? Browse other questions tagged neuroscience motivation performance io-psychology well-being or ask your own question.

30
What is the most effective maximum work duration per day?
3
Failing to recognise one's own work
3
What are the neuroscience research findings on the importance of breaks in cognitive function and specifically learning?
1
Optimal learning time per day

11
How can you limit excessive risk-taking at the institutional level?
20
How long can a person stay happy, excited and motivated about something new?
11
How do SSRIs work?
30
What is the most effective maximum work duration per day?
5
Can reading a non-fiction book with great curiosity account to taking a break?
6
How does neuron stimulation work?
0
How should I understand the Maslow's Hierarchy of Needs?