Is there any evidence (papers, studies, etc) that the Fusiform Face Area is used for any other type of recognition besides facial recognition? I remember hearing or reading a long time ago that experts activated the FFA when doing within class classification in their areas of expertise, but I don't know where to find this evidence.

Yes. The idea that the fusiform face area (FFA) is domain-selective for faces is the dominant hypothesis, but a competing hypothesis is that the FFA is recruited for fine discrimination in visual stimuli of any type in which we are experts.

In a famous study, Gauthier et al. (1999) taught participants to categorize fictitious Greebles (see image below). Subjects were brought in for several sessions and, as their accuracy increased, activation in the FFA increased as well. The authors concluded that "expertise seems to be one factor that leads to specialization in the face area."

In another study, Gauthier et al. (2000) tested bird and car experts on identifying birds, cars, faces, and objects. They found that bird experts elicited more FFA activation for birds compared to cars, while car experts showed the opposite pattern (see below, right). 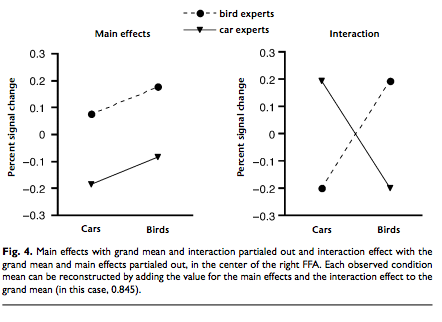 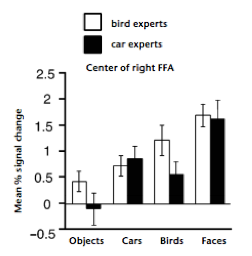 Not the answer you're looking for? Browse other questions tagged neuroscience perception neuroanatomy or ask your own question.

18
Does the fusiform face area in patients with Prosopagnosia (face blindness) show lower activity under an fMRI?
1
Are there any studies that were able to localize Fusiform Face Area (FFA) for face processing using EEG source localization algorithms?
6
Are there neural loops within a column or an area of the cortex?
3
Is the Thatcher Face Illusion only limited to face recognition?