Why do SSRIs take multiple weeks to reach their full effect?

What is it about SSRIs that they require 2-4 weeks for their long-term effect to become present?

Is this the result of small accumulations over time in some aspect of the brain?

Are there other medicines which are known to have a delayed onset of effect like this?

Short answer
The delayed effect of serotonin-specific reuptake inhibitors can be explained, at least in part, because of their actions on the downregulation of presynaptic 5HT1A receptors.

Background
When serotonin (5HT) uptake is inhibited by SSRIs, 5HT diffuses away from the synaptic cleft of the cells that release 5HT diffusely in the brain (Fig. 1). It is believed that eventually 5HT disperses in the extracellular space and reaches the dendritic regions of the cells releasing 5HT (Fig. 2).

The delayed action (say, 2 weeks) can be explained by 5HT's action on 5HT1A receptors in the dendritic region. After continuous activation of 5HT1A receptors, they start to downregulate, which in turn changes the firing pattern of the serotonergic neuron into a more fluttering mode over time. This mode of firing tends to release a lot more 5HT (Lucas et al., 2007), in turn increasing postsynaptic 5HT2A activation. Downregulation of 5HT1A receptors takes time, explaining the few weeks delayed onset (Fig. 2)*

Note
The frogozo et al. (2017) reference and extracted open access image in Fig. 2 are kind of dodgy, but the image, despite the typos (hiperpolarization should be hyperpolarization etc.), clearly depicts what I mean to convey here 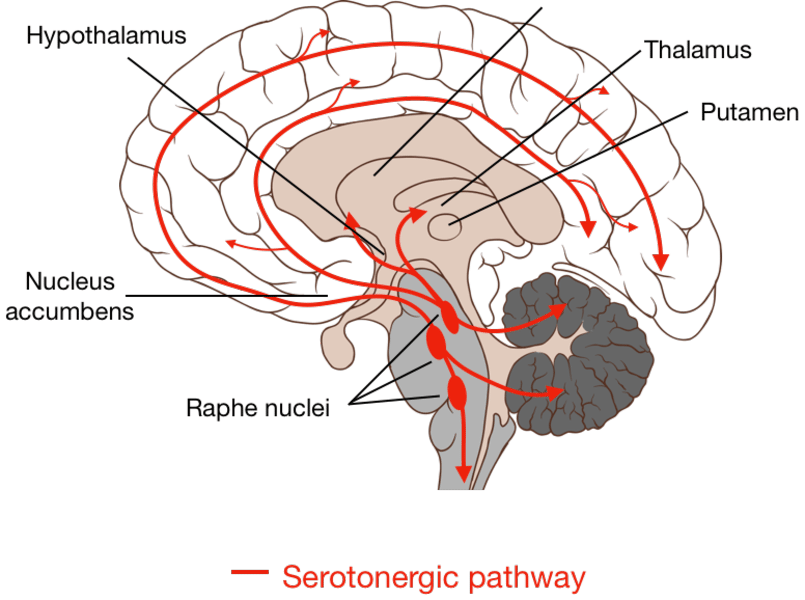 Fig. 2. SSRIs block 5HT reuptake, causing presynaptic increases in 5HT. Direct effects are an increase of postsynaptic 5HT2A activation. Over time, say a few weeks, this buildup of 5HT causes a downregulation of inhibitory presynaptic 5HT1A receptors, in turn causing more flooding of the brain with 5HT. This point is where the real effects of SSRIs start to kick in. source: Fregozo et al. (2017)

21
Is serotonin conclusively linked to depression?
7
Can the effectiveness of antidepressants be explained by a placebo effect?
5
Do antipsychotics have a delayed onset of action similar to (monoamine) antidepressants?
4
Are neural adaptation and drug tolerance to psychoactive drugs related?
3
Do psychiatrists and researchers themselves don't have an idea how antidepressants work?
1
Where to find information regarding the effect of ion concentration in the brain on behaviour?
3
What is actually happening with neuron during refractory period?
2
What has changed in your brain after electroconvulsive "therapy" (ECT)?
1
What comes first? Thought or electric activity?