What is the cochlear frequency response by number of hair cells?

I am trying to recreate the cochlea/basilar membrane response to sound and want to know how the hair cells are bucketed or binned by frequency, so an ideal list would be something like 10 kHz - 12 kHz: 2,000 hair cells and this across the frequency range of human hearing. I think there's overlap in the frequency response so an average would work.

The basilar membrane of the cochlea has a logarithmic frequency distribution, at least for the better part, such that an equal space is occupied per octave from 1 kHz and onwards (Fig. 1). This means that an octave at low frequencies is represented by more hair cells than an area of basilar membrane spanning an octave at high frequencies. The density of inner hair cells is similar across the basilar membrane, at least in normal-hearing folks. When we grow older, basal hair cells (i.e., those encoding high acoustic frequencies) degenerate first, leading to decreased densities in those regions. In normal hearing folks, there are about 100 hair cells per mm (Fig. 2).

Given the total length of the basilar membrane of 36 mm (Keen, 1940 and the two figures below you should be able to divide the basilar membrane into any number of frequency bands and convert those to distances along the cochlea using the Greenwood function of the human cochlea (Fig. 1). Then you can determine how many inner hair cells are devoted to each band using Fig.2 (about 100 HCs per mm). You can check the resulting model after you have applied it by comparing the cumulative number of modeled hair cells across the full frequency range of the human cochlea (~20 Hz - ~20 kHz, give or take) with the total number of inner hair cells present in the human cochlea (3,500). 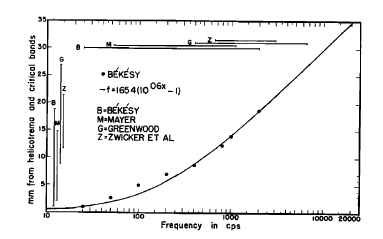 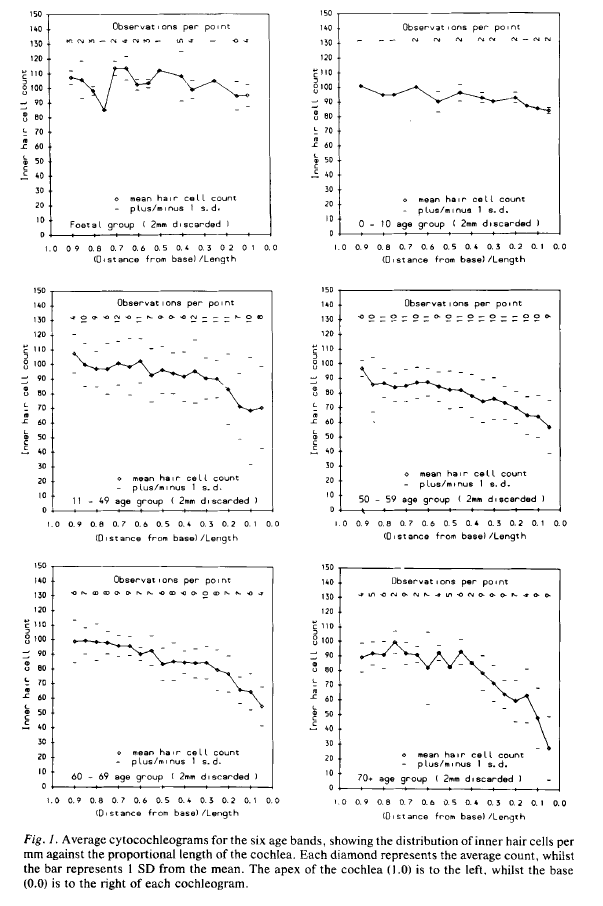 3
What is the location of the center-surround receptive fields of retinal ganglion cells?
2
What is the function of the connection between the two halves of the thalamus?
8
What explains the characteristics of the receptive fields of simple cells in V1?
3
What is the frequency range of electrotactile stimulation?
4
What is the difference between principal neurons and pyramidal cells?
2
How do the outer hair cells amplify the traveling wave?
3
Is Tinnitus caused by damage to the dorsal cochlear nucleus (DCN) or Auditory Cortex, which can be repaired?
5
How do hair cells recognize frequencies?