The differences between sensory distortions and hallucinations

So, the way I've understood it, "sensory disturbances" can be categorized as follows: 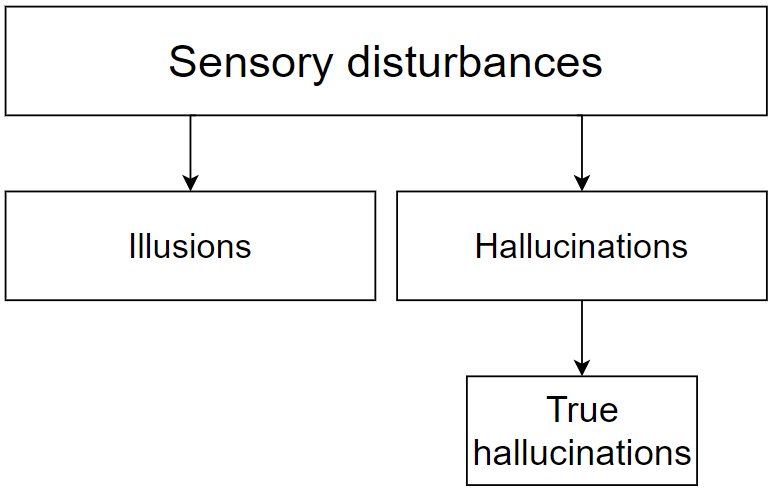 So, if a person perceives an object to be a different color, whether it is due to an altered state of consciousness, or if it is due confusing circumstances, is this an illusion or a hallucination? The object is real, it does have a color (which in a sense isn't real and potentially experienced differently by different people), and the person sees the color differently than what they normally would. Is this external stimuli being distorted/misinterpreted, or is it a hallucination being superimposed upon or merged with an external piece of stimuli. What if the subject doesn't see a different color, but rather a different shade of the same color?

At the heart of these questions really is the question: does in the absence of external stimuli necessitate that the hallucination not involve external stimuli, or not depend on it? If the object is falsely perceived to be moving, it involves it (and in a sense depends on it too), however, it isn't the nature of the object that causes the sensory disturbance, but rather an internally created disturbance (the perception of motion) instilled into the object. But since that percept of motion, although originating from within, modified an external stimuli in order to give the final experience, is that experience then an illusion due to it coming in the form of distorted, external stimuli?

Basically, I'm wondering about the nuanced border between illusions and hallucinations, if there even is one. If there isn't one, and there's a large grey area between them, then how does one differentiate between the two different categories proposed for the class of drugs that are hallucinogens? The broadest definition includes all drugs that sensory disturbances, and the most narrow definition is limited to those that produce hallucinations. How can that discussion be had in the event that there is a large gray area between illusions and hallucinations?

The differences between illusion and hallucinations are quite clear and have been known for over 100 years.

For example, hallucinations are when you see things in total darkness or hear things when there is no sound. It is perception WITHOUT an external stimuli.

Regarding illusions, there IS something to be seen, heard, tasted or felt, an external stimulis, but the impression received is misinterpreted.

What matters here is not how the taste is changed, but the fact that it HAS changed.

Not the answer you're looking for? Browse other questions tagged sensory-perception hallucinations optical-illusion drugs categorisation or ask your own question.

2
Why can some drugs make us hallucinate and think the hallucinations are reality?
4
Can ESP and out-of-body phenomena be understood as a form of dreaming or hallucination?
11
Why does sensory deprivation cause hallucinations?
7
How do auditory and visual hallucinations differ within the brain?
4
What is the difference between apparent motion and apparent movement?
3
The interactions between hallucinations and reality in people with schizophrenia
2
Are normal external stimuli still processed by the brain during a hallucination?
3
Synchronization of perception of sensory information