Is it generally accepted idea that a memory associated with strong olfactory stimuli will be kept longer?

Question: If you go to see flowers and don't smell them, is it likely that you will forget the event easier than when you do smell them? assuming all the other factors are constant.

These days, with my nose always covered by a mask (and only smelling my own breath all the time), I can hardly smell flowers. So, when I went to see flowers last weekend, I guessed that the event will be less memorable than those from previous years.

I'm not in the bio/neuro field, so I wanted to check if my guess was right. After a few hours of search, I concluded that the guess wasn't a bad one. What I learned from the quick search was that: the olfactory system pathway is different from those of visual or auditory systems. For example, optic signals are relayed to the optic chiasm, which locates beneath the hypothalamus, then to the lateral thalamus, then to the visual cortex, which is near the back head. So, they just "pass by" the limbic system. Olfactory signals, on the other hand, are directed to the limbic system, parts of which handle emotional memory(amygdala) and long-term memory(hippocampus). Except that I am not sure what that 'handle' exactly means, it seems sensible to me that electric signals directed closer to the part of the brain related to memory are more likely to stimulate memory than those signals that divert the part.

I was happy to learn something new and posted it somewhere. Sadly, one of my distant friends had to disagree with me. She has ph.D. in a somewhat related field (she may have a good reason for that) and she refused(!) to give me a further explanation :(

What did I get wrong?

In general, the answer is no - smell does not enhance memory.

But you are onto something with the proximity of the olfactory cortex to the limbic system: You are not the first to have noticed the special connection that smell might have with emotion and memory. This idea is called the Proust Effect:

The best known example of the power of smell to evoke memories and emotions is the “Proust effect,” ... The suddenness of the memory, and the strong emotions attached to it, have become symbolic, in both the realm of literary criticism and in sensory physiology, for the power of human taste and smell. ... The olfactory pathway has privileged direct access to [the prefrontal cortex and limbic system]; hence the combination of intense emotion and intense cognitive effort experienced ...

In psychology, context-dependent memory is the improved recall of specific episodes or information when the context present at encoding and retrieval are the same.

This is a well-known and highly robust effect: If you see and smell flowers, then exposure to the same smell (cue) can significantly improve recall of the flowers (target) later. However, smell does not have a privileged position in context-dependent memory - that is, any context information (such as the sounds, location, even the mood you were in) can be equally effective at cueing recall later (Herz, 1998; Herz & Cupchik, 1995).

Most of the research looking at the effect of smell on memory is about the context-dependent memory effect. In these studies, a no-odor control condition is sometimes used where some subjects are exposed to an odor during encoding (memorizing) but no odor is used at recall (remembering). These studies consistently find that odor during encoding has no effect on memory unless the same odor is also present at recall (eg, Parker, Ngu, & Cassaday, 2001). 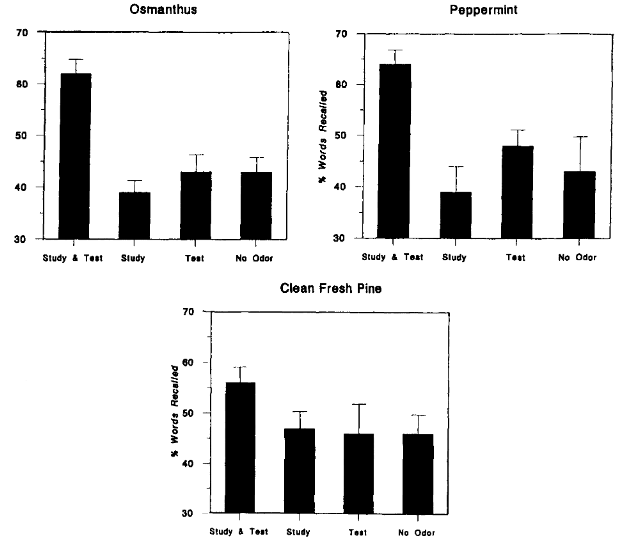 In the above image from Herz (1997) for example, scent must be present in both encoding (study) and recall (test) to have an effect; in other conditions, memory is no better than if no odor is present.

According to the Proust Effect however, when emotion is involved, then odor can potentially enhance memory. For example, if you see and smell flowers just as a car accident happens in front of you, AND you happen to come across the same smell later, then it can serve as a powerful recall cue of the event (Toffolo , Smeets, & van den Hout, 2011; Herz, 1997; Wiemers, Sauvage, & Wolf, 2014).

In reality, the smell of flowers is pleasant, and thus you might linger around longer, resulting in improved recall not from the smell, but from paying more attention to your surroundings (Morrin & Ratneshwar, 2003; Krishna, Lwin, & Morrin, 2009; Lwin & Morrin, 2012; Tortell et al, 2007).

Not the answer you're looking for? Browse other questions tagged perception emotion memory sensation encoding or ask your own question.