How are neurons able to effectively communicate when there are way more dendrites than axons?

Neurons can have up to 100,000 dendrites and typically only have a single axon. This means a neuron typically has a very large number of inputs while only having a single output. Surely you can see the math doesn't add up here. There are not enough axons to connect to all of the dendrites, so where are the dendrites getting their information from?

I did a quick Google search and I found out the following:

Although the University of Queensland, Australia states that the neuron has three main parts:

A neuron has three main parts: dendrites, an axon, and a cell body or soma

There is a part which is neglected to be mentioned, which answers your question, and that is the axon terminals (Biology Dictionary).

These are the receiving parts of the neuron. Dendrites receive synaptic inputs from axons, with the sum total of dendritic inputs determining whether the neuron will fire an action potential — a brain signal.

(Also called synaptic boutons, terminal boutons, or end-feet) are distal terminations of the telodendria (branches) of an axon. An axon, also called a nerve fiber, is a long, slender projection of a nerve cell, or neuron, that conducts electrical impulses called action potentials away from the neuron's cell body, or soma, in order to transmit those impulses to other neurons, muscle cells or glands. 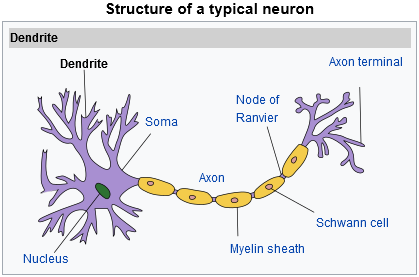 While there is one axon, there are many terminations from that axon. Synapses at the end of the axon terminals pass the action potential to either another neuron cell body to be passed to many more or to muscle cells or glands.

Be aware though, that:

Neurons are not in direct contact with each other. There are extremely small spaces between each neuron known as synapses. Because there is not a direct connection, neurons must communicate with each other indirectly through the use of neurotransmitters. This communication is facilitated by the conversion of the electrical signals within the neuron to the chemical signals within the synapse.

1
Mind uploading & its constituents: Theoretically possible?
2
If it takes multiple action-potentials to cause one action-potential in another neuron, why don't brain signals dissipate almost immediately