Both single neurons and groups of neurons can generate oscillatory activity spontaneously. In addition, they may show oscillatory responses to perceptual input or motor output. Even memory and thinking is associated with these neural oscillations.

My question is, are these nerve responses always oscillatory in nature? Or do we find patterns in the firing of neurons (action potentials) or in the postsynaptic potentials which are truly chaotic and do not fall under any oscillatory patterns? Or is it that because of the vast amount of inter connections between neurons as well as different sections of brain, synchronous behaviour always pops us?

All time-varying signals can be decomposed into the frequency domain, e.g. using the Fourier transform. This is a common technique for analyzing brain signals, e.g. from EEG.

However, doing this transform does not mean that the underlying signals are oscillatory in nature. Even if we talk about power in some particular frequency band, that does not mean we are talking about an oscillation at that frequency. Event-related potentials are often analyzed in the time domain, but nothing would stop you from analyzing them in the frequency domain.

When you write "memory and thinking is associated with these neural oscillations", this can be true of frequency analyses but yet not really related to oscillations. Artur Luczak and Ken Harris have argued for evidence of "packet-based" communication in neocortex (see for example their Luczak et al 2015 review). Effectively these are bursts of activity lasting on the order of 100-100s of milliseconds. They've shown that in anesthetized states these "packets" are revealed in a slow "oscillatory" power in the EEG/LFP, which makes sense: if you have a bunch of events that last 100-100s of milliseconds, you're going to find power in the low frequency bands. However, these are not oscillations. They are discrete events. In the wake state, the same events happen, but because there are no gaps between them, you don't see an oscillation in the EEG.

More generally, this is true of any events in frequency analysis. If you add a bunch of events lasting, say, 50 milliseconds to a white noise signal, you will see an increase in power in the vicinity of 10 Hz. They need not oscillate at all.

Some researchers have argued that we should be more aware of evidence for and against true "oscillations" when analyzing EEG. From Donoghue et al 2020:

They recommend analyzing frequency-domain signals in terms of the broadband power (dominated by the lowest frequencies), the exponent of power decay with frequency (neural signals are typically in the range of 1/f or 1/f^2, but this easily generalizes to 1/f^a), and then isolating evidence for actual oscillations that deviate from these parametric fits (linear in log-log space): 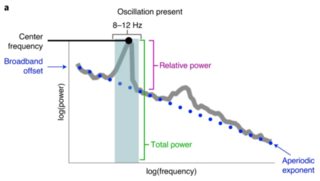 In this figure, you would only identify an oscillation in the alpha 8-12 Hz range. All of the rest of the power spectrum derives from non-oscillatory time-varying neuronal activity, which still has some detectable frequency structure.

Another area of emphasis in the analysis of brain signals is the idea of criticality, in particular work by John Beggs. Criticality is the border between chaotic and organized (oscillatory) activity. A prediction of this theory is exactly the power-law decay with frequency (1/f^a) described above. This scheme refers to "neuronal avalanches" which are events of synchronized neural activity that share some features with the "packets" of Luczak and Harris. Waking brains tend to be near this critical point, whereas during sleep there is much more oscillatory organization and the brain is further from critical. Although criticality can be described as "near chaos", I think it's important to recognize that it is not chaos, no matter how complicated it is. It's still quite organized, just organized in a way that optimizes information processing. Oscillations that are too organized have little capacity to transmit information (consider the information transmission limitations of radio bands that humans use for television, radio, and cell phones, for example).

Not the answer you're looking for? Browse other questions tagged neuroscience neurophysiology neural-network or ask your own question.

13
Are brain waves electromagnetic waves?
2
Does the brain contain chaotic systems, akin to the weather or planetary orbits?
0
Is the oscillatory power inversely proportional to the frequency?