What are higher-level and lower-level brain functions?

How exactly do we define "higher level" and "lower-level" functions? Moreover, is there a middle-ground where certain functions cannot be described to be higher-level or lower-level?

Higher brain functions are the operations of the brain that stand at the pinnacle of evolution and are largely unique to humans. Verbal communication, the ability to “think in the future,” and the capacity to hold multiple tracks of complex information “on-line” at the same time, are examples of higher mental functions [...]. The higher-order capacities of the human brain can be captured under the terms “cognition” and “behavior.” Cognition is composed of intellectual function, memory, speech and language, complex perception, orientation, attention, judgment, planning, and decision-making. Behavior is the manifestation of these cognitive functions. Behavior is guided by another facet of higher brain function—namely, personality, which describes the psychological make-up, traits, and response styles that typify a person’s behaviors across a range of situations and circumstances.

Lower level functions, on the other hand are not that well defined, and I guess it's pretty much anything else than the above :) A look at the visual system can help illustrate the difference (Fig. 1). The purple areas in the figure reflect areas mediating lower-level functions, namely retina (sensation of light), optic nerve (secondary visual neurons that send signal to brain), superior colliculus (low-level localization functions and saccade initiation), and V1 (processing of simple shapes). The higher-level areas, namely 'What' (dorsal stream), 'Where' (ventral stream), 'How' reflect higher level functions that reflect human consciousness, namely the interpretation of the identification of objects, and whether they are stationary, or whether they are moving. These are what Tranel calls 'complex perception'.

However, in contrast to Tranel's definition, these are not solely human capacities, because some animals are well-versed in discriminating different species (a mouse will respond differently to a fellow species and a cat :-) and where a target object is going (the same mouse will generally walk in a different direction than the cat is going). This is probably the answer to your question whether there is a gray area between high and low-level functions in the brain - yes, there is. The two terms are umbrella terms and not that well defined. In fact, I couldn't find a strict definition of 'lower-level' brain functions after a Google search. 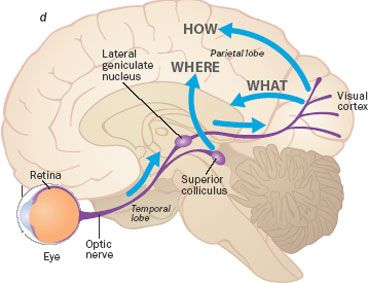 Not the answer you're looking for? Browse other questions tagged neuroscience cognitive-neuroscience terminology brain neuroanatomy or ask your own question.

7
How does it come about that specific areas of the brain are associated with specific functions?
4
Are axons in the brain weighted?
5
are serotonin levels higher or lower in dominant vs. non-dominant primates and humans?
2
What does "The brain has its own language for testing the structure and consistency of the world." refer to?
4
What is the state of the art research of the consciousness level for high-level cognitive activity?