Does anyone have a suggestion of the kind of stimuli I could use for a categorization experiment that needs a range of clearly defined and a range of ambiguous stimuli?

I need to produce both a range of single stimuli, and a way to combine multiple stimuli in a set which shares this characteristic of having both clearly defined ranges and an ambiguous one.

Some Context on the General Goal

I am currently conducting an experiment where I want my participants to learn two different schemata aiming to test whether people will implicitly assume details from the whole scene based on what schema better accommodates the given stimuli. For that reason, I need some ambiguity to be solved through contextual cues, so I can check whether the same stimuli might be interpreted in different schemata and compare whether or not different participant groups assume different implicit information based on that. So each schema will be composed of a character, an action (a verb, executed by the character), a simple noun for an object and a collective noun for a set of objects, which will be part of the action.

What I am looking for is a possible kind of stimuli that might either fall clearly into one of two categories or be ambiguous and hard to categorize into one of the categories. I need to be able to combine them into sets of 3 where I might make the set: (a) clearly belonging to a collective category, by combining all the 3 stimuli from items also clearly from that category, (b) completely ambiguous, by having all the 3 stimuli ambiguous, and (c) intermediate degrees, by combining 1 ambiguous + 2 unambiguous; 2 ambiguous + 1 unambiguous for both sides.

What I've Tried So Far

I'll show you with an example of what I have tried so far. I have two categories, 'namu' and 'bonho' (both 2-sylleble pseudo-words of Portuguese): 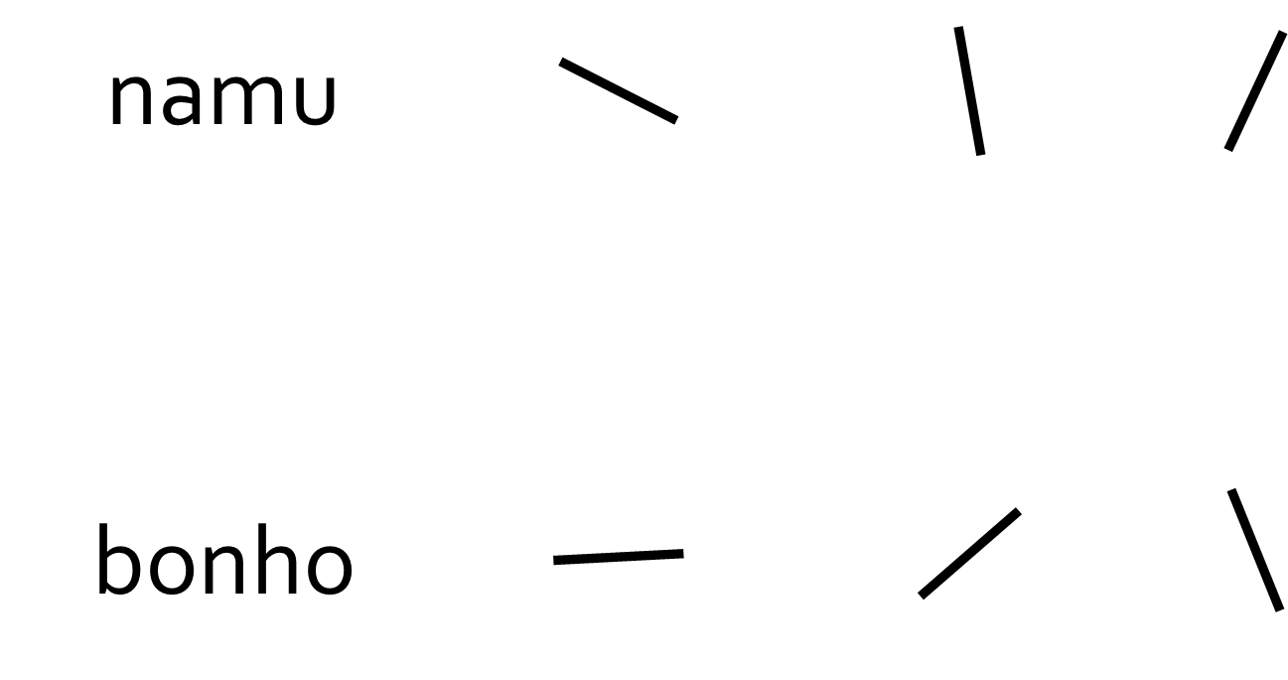 Furthermore, as like I said, I need to be capable of combining multiple stimuli to form sets made of stimuli of the first categories, like this:

I have made a single test with the 1-stimulus form (namu vs bonho), but it does not meet my goals so I never tried the combined 3-stimuli form.

Problems with those stimuli

The problem with the mentioned strategy is that both my niblings, which tested the task for me, and even myself when testing it, followed the strategy of answering according to the highest side: if the highest side was the left side we answered 'namu', for instance, even though there were some errors this rule of thumb worked most of the times with random stimuli uniformly distributed between 1 and 179 degrees. I thought about changing the distribution to a normal one with mean in 120 degrees and a standard deviation of 40, so the majority of the stimuli would be ambiguous, but then too few would be clear and it doesn't seem like it's going to work.

Does anyone have a suggestion of the kind of stimuli I could use for this purpose? As far as I researched, I have found nothing in the literature about this kind of situation. I have found about both unstructured and structured (rule-based) categorization tasks, but nothing about a mixed range. But a reference of this kind would also be a good answer to my question.

Browse other questions tagged cognitive-psychology experimental-psychology categorisation or ask your own question.

5
Source for standardized audio files for an experiment in German
6
Quantify degree to which non-diagnostic features bias category-present response
3
Which ready-made programs can I use for running a preference-rating experiment?
3
How to structure affective picture stimuli for an EEG study?
5
How common is it for twins conjoined at the head to share thoughts and visual stimuli?
2
Open data for behavioral psychology experiment?
0
any reliable sources or any help for bransford and johnson's laundry experiment?
0
In an experiment with animated stimuli, should I accept answers during Animation Time and count it into the Response Time?