Is short-term memory theoretically possible to with spiking neurons?

So I close my eyes, turn around, open them for just a blink and close again. I have observed a chair. I can't tell you how the chair looks like in detail, but I can more or less tell its shape and color. What's more, if I'm not disturbed, I can remember that shape and color for at least a minute.

What if I wanted to construct a device that could repeat this process. With digital hardware its not too hard - take a digital camera and a solid state memory device. For every bit of info in my solid state drive, I can call the operation "store" and my bit will be stored, or "erase" and it will be erased. Don't know how reliably each physical bit works with current technology, but given sufficient number of physical bits per logical bit I can theoretically make a device that will store my picture for as long as I want.

What about building a spiking neuronal network to do the same thing? I have tried some naive approaches, and I arrive at a fundamental problem: spiking neuronal networks seem to have almost no inertia on the fast timescale. A neuron only fires while there is sufficient input. When input is gone, it no longer fires (besides some resting state activity). I can construct a network with recurrently-connected neurons, in which case, in principle, the activity of the network could sustain itself after the input is gone. However, depending on the parameters of the network I observe a rapid switch between two very extreme behaviours. In one case, the feedback strength of the network is too weak, and the activity drops as soon as the input is gone. In the other, the feedback weight is too strong, and the activity of the network quickly reaches some maximal firing state independently of which exact input the network has received. These transitions happen exponentially fast. Theoretically, there are adaptive control mechanisms in neuronal networks, such as inhibition and synaptic plasticity. However, I am struggling to understand how such mechanisms can ever be fast enough to compensate for the sudden increase or drop of input.

TL;DR: Naively neuronal networks do not seem stable enough to implement robust short-term memory. What are the known mechanisms that nevertheless make it possible?

Note: I'm not asking how exactly short-term memory works. I am aware that nobody really knows. I'm asking for intuition to help disprove my argument that it should not work when implemented using neurons.

While we don't entirely know how all aspects of working memory operate, experiments show that a subset of cells in the brain exhibit persistent activity during working memory tasks.

Here's an example from a review by Curtis & D'Esposito: 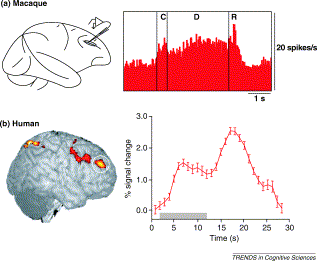 This is a task in panel (a) where there is a cue presented briefly (marked by "C"), and then the monkey needs to remember the cue (during the time marked by "D"), and finally at time R the targets appear and the monkey can make a response.

We see in spiking recordings from monkeys that there are cells in dorsolateral prefrontal cortex that are activated not only by the cue and during the response, but they have persistent activity during the delay period. In human studies we can't ordinarily place electrodes but part (b) shows a similar study using fMRI, and the colored areas on the brain indicate brain areas that demonstrated more blood flow (marking metabolism) during the delay period, which includes areas of the same brain region as the monkey experiments.

The explanations are recurrent network activity and bistability: a population of cells that is excited can continue to excite each other and remain active until stopped (see for example attractor networks for a conceptual idea), as well as bistability in individual neurons where a neuron that reaches threshold continues to fire tonically rather than firing a single action potential, until firing is ceased via inhibition. Camperi and Wang 1998 is an excellent, clear review of these concepts with a straightforward mathematical approach to how you can model this in silico. It's probably more efficient to start from here rather than reinventing it on your own.

I also recommend other papers by XJ Wang who has done extensive work in this area. I also recommend you look at phase-space diagrams which can help conceptualize dynamic systems with stable properties (and which network parameters are necessary for stability), they come up a lot in theoretical neuroscience. Dayan and Abbott's Theoretical Neuroscience is also a good starting point if you can find a copy.

Not the answer you're looking for? Browse other questions tagged theoretical-neuroscience working-memory short-term-memory or ask your own question.

10
How can I test whether Dorsal Raphe Nucleus (DRN) activity at night is related to variations in mood?
2
Does stress impair your short term memory?
3
How many possible states does a brain have?
12
By which neuronal mechanisms does music make us happy or sad?
5
What sources of randomness does the brain use for sampling?
1
Biologically plausible models for causal inference in the human brain