How to take advantage of the withdrawal symptoms of antidopaminergics?

So this may be a stupid question as I am not trained in neuroscience or psychology at all, but I had an idea about a somewhat counterintuitive approach to psychotropics and was wondering whether if it was at all scientifically sound and feasible.

Since the mechanism of antipsychotic drugs in an oversimplified sense is just to decrease dopamine, naturally when you withdraw your brain would respond by having an increase of dopamine. More specifically, since your brain overreacts to the antipsychotics it starts dramatically over sensitizing your brain to dopamine. So it seems to me that the reverse effect of the withdrawal is way more powerful than the direct "purpose" of the drug (this is in a sense how I understand the condition of tardive dyskinesia). My thought is that this approach is particularly advantageous for the long-term use of physiatric drugs since in the long term the use of physiatric drugs has very little effect (and can sometimes even entrench mental illness further). Because of the fact that when dependence is developed the brain's structure and functioning in response to the ongoing presence of psychiatric medication is changing, it seems that developing drugs whose intended effects come from withdrawal would help resolve issues surrounding tolerance (as protracted withdrawal can sometimes last for years after the last dose of a drug was taken). Is it viable to use a drug originally meant to suppress dopamine transmission to induce tolerance and thus increase dopaminergic effects to treat another disease where more dopamine is needed? For instance, can we use the anti-dopaminergic compound haloperidol to induce tolerance to address lower concentrations of dopamine transporters in people with ADHD, as opposed to using amphetamines?

This is not an a totally absurd proposal if dosage and time-related issues weren't a factor, but it is rife with practical difficulties otherwise.

In schizophrenia patients, what you're talking about has been widely studied, under terms like "antipsychotic-evoked dopamine supersensitivity", "supersensitivity psychosis" (SP) etc. The latter is basically "a limbic equivalent of TD".

The problem is that TD and SP are pretty correlated, in terms of the dosage required to obtain them, and require "overdosing" the (schizophrenia) patient. Typically, in order to obtain the anti-psychotic effect, 65%-80% peak striatal D2 occupancy is needed. TD/SP most commonly occur at greater than 80% occupancy.

Using 1st gen anti-psychotics (e.g. haloperidol) for this purpose in therapeutic is probably the worst idea, because achieving the desired super-sensitivity to striatal dopamine would mean giving the patient TD (tardive dyskinesia) with pretty high probability. TD is generally considered the worst side-effect of anti-psychotics (see previous link). You could say the cure (TD) is worse than the disease you'd want to treat (ADHD). On other hand, it may a little more plausible to do this with atypical (2nd gen) antipsychotics.

For instance, quetiapine [39] and clozapine [33,40] can induce SP without producing overt or detectable drug-induced movement disorders.

But atypical anti-psychotics aren't totally free of the risk of TD, they just reduce it.

Even disregarding side-effects (which AliceD's answer covers aplenty), which would actually be exacerbated by the high dosage needed, the problem is that the SP phenomenon (which would be the basis of propose cure for ADHD) is variable in time:

The persistence of the dopamine supersensitivity syndrome depends on the duration of the preceding blockade [132] and on the specific antipsychotics used (fluphenazine, perphenazine, clozapine, and quetiapine) [1,41].

So it would not be a cure for ADHD except possibly in small number of patients for whom the long-term effect comes out "just right". There's also the obvious risk of "overshooting" and inducing actual likelihood of psychosis in someone (with ADHD) who didn't have such a risk.

In general, giving a patient a drug and adjusting the dosage until the desired effect is observed is simpler than giving a drug hoping for permanent effect that only stabilizes some time after not taking the drug.

On top of these, there's the issue that the exact mechanism of ADHD isn't absolutely sure. And that basically all psychotropics act on more than one neurotransmitter, so the don't totally cancel each other out. For these reasons, there are even publications discussing co-medicating some/few patients with anti-psychotics and stimulants, even though these classes of drugs partially cancel each other out.

Now very interestingly, there is a 2014 paper (alas with only 6 citations) that does propose using very low doses of haloperidol as an adjuvant of L-Dopa in Parkisons precisely for this purpose of causing dopamine supersensitivity (and not for the common purpose of treating co-morbid psychosis that some Parkinson patients exhibit).

The trick that makes very low doses feasible for this purpose is that antipsychotics cause the D2 receptors to switch to a D2High (high-affinity) state. Apparently this switching happens even a low dosage of antipsychotics.

Unlike in your proposal though, although the effect apparently lasts for a while after haloperidol discontinuation, it begins on it. 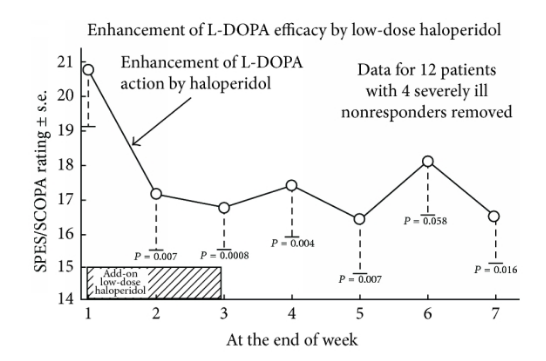 The authors of this paper also emphasize a more substantial decline in "freezing" (a Parkinson symptom) that may coincide with the peak (and delayed) effect of D2High caused by haloperidol, but frankly the data is pretty weak in that regard and one can easily level "p-hacking" at this particular finding: 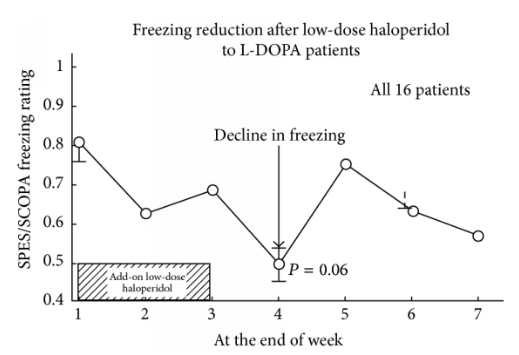 If it needs saying, even if this "trick" were to work better (e.g. with other doses), since Parkinson is neurodegenerative, there's only so much tweaking at the margin of the remaining neurons' sensitivity you can hope to do, before the loss of more/enough neurons overtakes that extra sensitivity.

Also, there actually many ways to trigger D2High states, stimulants themselves (e.g. amphetamine) do that.

Short answer
Taking dopamine antagonists leads to serious side effects, and stopping taking them leads to other, equally nasty side effects. None of them include happiness or feeling energized.

Background
So basically, based on our discussion in the comments, I think you are after the following:

Now fast forward to your withdrawal state that should make you happy, as dopamine transmission may indeed be exacerbated. The tolerance to haloperidol comes, at least in part, because D2 transmission is enhanced in the striatum in the brain (Ginovart et al., 2009)0. This leads to the dreaded tardive dyskinesia.

Abrupt stopping haloperidol intake after chronic use results in side-effects on their own in psychotic patients (apart from re-inducing psychotic states), namely (Bronson, 1993):

In all, happiness doesn't seem part of the deal of acute withdrawal from a well-investigated dopamine antagonist, unfortunately. Taking them is a pain, and stopping them abruptly is also not a pleasant thing to do either. When you slowly decrease dosage the withdrawal side effects will be less severe.

2
How does my spinal cord know to take reflexive action?
4
How should medication for the treatment of ADHD symptoms be calibrated?
3
How long does it take for electrical impulses from neurons to travel in the human brain?
6
Is it dangerous to take an antipsychotic drug irregularly?
5
How addictive is Heroine?
3
How to test whether THC or CBD gives a mental boost?
4
How does the chemical structure of a drug determine potency?
1
Why do SSRIs take multiple weeks to reach their full effect?