Is there a neurological difference between someone experiencing a "normal" trauma response, and someone with PTSD? Or are they on the same continuum?

I've been reading Dr. Bessel van der Kolk's book The Body Keeps the Score. Dr. Van der Kolk describes how, in people with PTSD, the brain actually undergoes changes in response to trauma. Their perception and interpretation of their world shifts on a neurological level.

Say a person doesn't fit all the criteria for an official PTSD diagnosis, but still experiences some (perhaps less intense or long-lasting) symptoms of post-traumatic stress. Is it likely that the same neurological changes would be taking place, just to a lesser extent?

Context: I'm writing an article about the cognitive effects of trauma on students, but most of the studies I find screen participants for PTSD specifically. I'm wondering if these studies would still apply to students who don't necessarily have PTSD, but still suffer from the aftermath of a trauma.

Is it likely that the same neurological changes would be taking place, just to a lesser extent?

We need to define those changes: 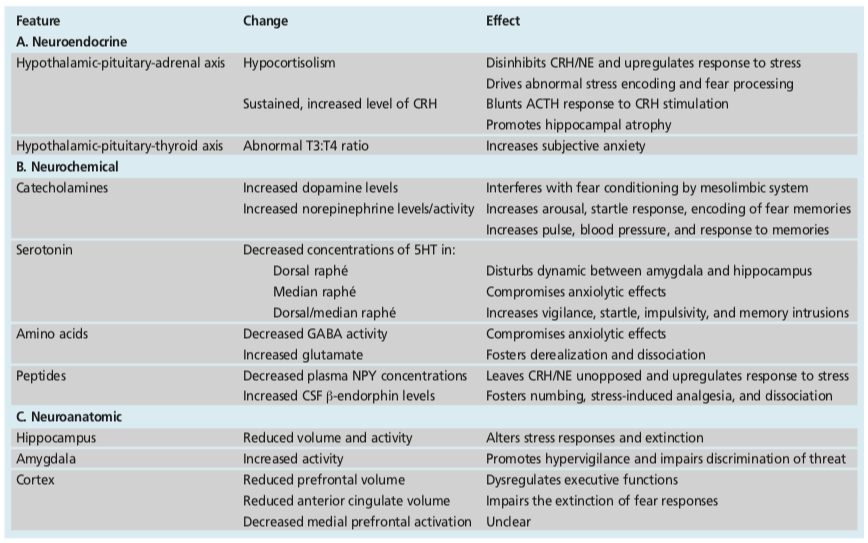 Additionally, other studies have demonstrated reduced amygdala volume in PTSD patients. It should come as no surprise that ASD features many of the same neurobiological changes (especially hypocortisolism) as PTSD, although quantitative differences may not correlate with symptom burden.

Marshall, R. D., & Garakani, A. (2002). Psychobiology of the acute stress response and its relationship to the psychobiology of post-traumatic stress disorder. Psychiatr Clin North Am, 25(2), 385-395.

Studies of the acutely traumatized have found that those individuals who are at increased risk for chronic PTSD are relatively more likely to experience a more severe acute emotional reaction. This includes not only the intensity of emotions such as fear, anxiety, and/or despair, but also dissociative experiences and cognitive disruption. This clinical picture, in turn, is associated with increased heart rate, increased skin conductance, and relatively lower levels of blood cortisol compared to those who will not develop PTSD (discussed later in this article). However, an interesting caveat to this generalization is that the presence of acute dissociative symptoms appears to mediate the intensity of the peripheral sympathetic nervous system response. Griffin et al. found that peritraumatic dissociation was associated with both greater severity of PTSD symptoms, and relatively greater suppression of autonomic physiologic responses.

Similarly, more recent research confirms the expectation that comparable neuroanatomic changes occur in ASD as with those seen in PTSD (particularly amygdala activation). In summary: ASD and PTSD share many neurobiological characteristics.

In contrast, adjustment disorder (sometimes referred to as "situational depression") is far more nebulous. It can be acute or chronic, and it can present in a variety of ways to the extent that its existence has been contested as ‘a progression threshold from normal human adaptation under conditions of stress, change, and loss, into the dark web of “mental illness.”’ In the linked article, John Daniels argues that adjustment disorder should be treated as a collection of behavioral responses to normal emotional states that can act as a precursor to better-characterized clinical pathologies like anxiety disorder, depression, and conduct disorder. This group of behaviors, Daniels contends, should be treated with counseling instead of pharmaceutical "brief therapies" that might be better served in combating the biochemical changes seen in ASD. There is an abundance of literature regarding the lack of rigorous study of adjustment disorder (a,b).

Ultimately, your analogy here is good for differentiating between the two possibilities you identified in being "sub"-PTSD (duration [ASD] vs. intensity [adjustment disorder]). Generally speaking, ASD has a similar neurobiological profile to PTSD with respect to chemical, physiological, and anatomic changes. To use your words, adjustment disorder "isn't necessarily analogous" to PTSD and rather encompasses a broad spectrum of (possibly normal) emotional responses to both acute and chronic stressors. This tracks with our understanding of other diseases: matching symptoms of variable duration are more likely to have the same underlying etiology (e.g. a mild runny nose lasting one week might be correctly ascribed to a host of different viral causes) as compared to symptoms of varying intensity that bear a passing resemblance to each other (e.g. rhinorrhea caused by a cluster headache doesn't implicate a virus).

You may find additional pertinent information on (and in the citations of) the Wikipedia pages for PTSD, ASD, and adjustment disorder.

Not the answer you're looking for? Browse other questions tagged brain neurology ptsd trauma or ask your own question.