How do I complete and report a Generalised Linear Mixed model from SPSS into APA?

I'm trying to learn how to do GLMM for my phd in psychology. I was intending to do a mixed model ANOVA, but the GLMM allows me to consider more variables simultaneously and so I have decided to go with this. I appreciate a very similar question was asked and answered some time ago, but the answer posted doesn't resolve my issue. I've read the Barr 2013 article and gone through the checklist and I have two extra questions.

1. Should I include random effects.

My data is from a psychology repeated measures experiment, with two independent variables, and an additional self-reported variable for each trial. The GLMM allows me to examine the role of each variable, while also accounting for the self-reported variable. I have collected a number of individual characteristics that could be related, and can add them in as a random variable. When I add them in, the model doesn't really change. So, does this mean that the result holds, regardless of the individual factors included in the model? Does this make the model more generalisable? In the Barr article in suggests reporting ‘by excluding the random slope for the priming manipulation, we assume that the priming effect is invariant across subjects (or items) in the population.’ - but I'm not entirely sure what they mean by 'invariant across subject'.

2. What information should I include in the resulting tables.

My data is output from SPSS, which provides two output tables. One gives the fixed effect for each variable, but the second table gives the fixed effects for each level of the variable as shown below. The obvious problem with this is that it is making comparisons between each level which results in a blank row. Is it sufficient to report the main fixed effects in the table, and then discuss the differences between levels where the main effect is significant? (For clarity, at the moment in the table below only fixed effects are included in the model and reported.)

If you have any thoughts or opinions on this I would really love to hear them.

Thanks for your time. 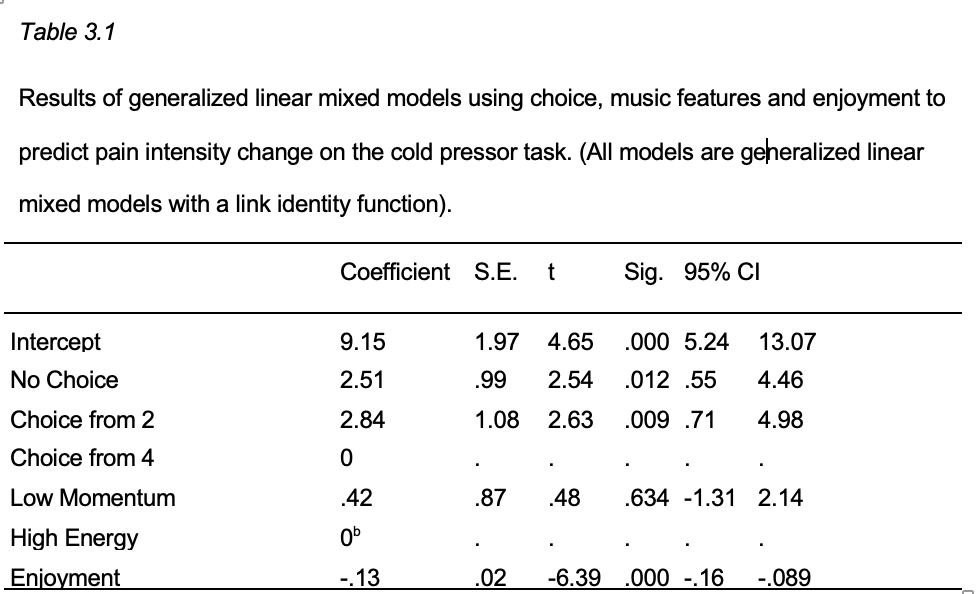 10
What articles use structural equation modelling in a meta-analytic context to model mediation?
6
Quantify degree to which non-diagnostic features bias category-present response
9
How to estimate an expected effect size for a planned psychology study?
5
Facet versus scale prediction of Big 5 personality
1
How to interpret HLM analyses looking at work group and individual worker effects?
2
How to report an F statistic in APA style?
10
How should results from linear mixed models (LMMs) be reported?
2
cleanIAT function in R IAT package
2
Power issues with mixed models