Which function to use for fitting learning curves?

Background
I am fitting learning curves for cochlear implant (CI) users. These folks get a CI, and then need to start learning to understand speech again. They keep on improving for years. Along the way, speech recognition is tested frequently. The outcome measure of speech tests is a simple word or phoneme correct score. The %correct score runs from a minimum of 0%, to a maximum of 100%. No rocket science thus far.

Typically, these learning curves start at a value around 25% and end at 80% (barred the rock stars, CI users never reach 100%). In the beginning they learn quick, and this levels off as to what seems a maximum (Fig. 1).

Question premise
Now I seek to fit a function to these data, because I want to know how fast they learn. I did this using regression analysis using the least-squares method in MATLAB. The function I used I found in another software package called GraphPad Prism. While the latter package was not used to analyze the data, I did use it as an inspiration to find a proper model. The function I fitted through the data (red line in Fig. 1) GraphPad calls a 'one-phase association function'

Y = Y0 + (Plateau-Y0).(1-exp(-Kx)), which translates to Y = Y0 + (Plateau-Y0).(1-e(-Kx)) if I am not mistaken (I don't understand the fancy formula make up, hope this'll do...) (Fig. 2). The link explains the backgrounds, but in a nut shell, it is based on a biochemical process, namely the interaction between an enzyme and a substrate. My purpose is a totally different one, namely a psychophysical one to model a learning process.

I chose the 'one-phase association' function, because the main parameters in the model follow my needs very well: it has a start value Y0 that reflects the baseline score when people get their CI, and there is a maximum (Plateau). In addition, it has the K value, which in (psycho-)physics would be called tau, which describes the slope. And this slope is what we need, as we want to know how fast these people learn.

* EDIT: after a literature search I found that the logit function is a sigmoid function, and, hence, it does have a slope parameter 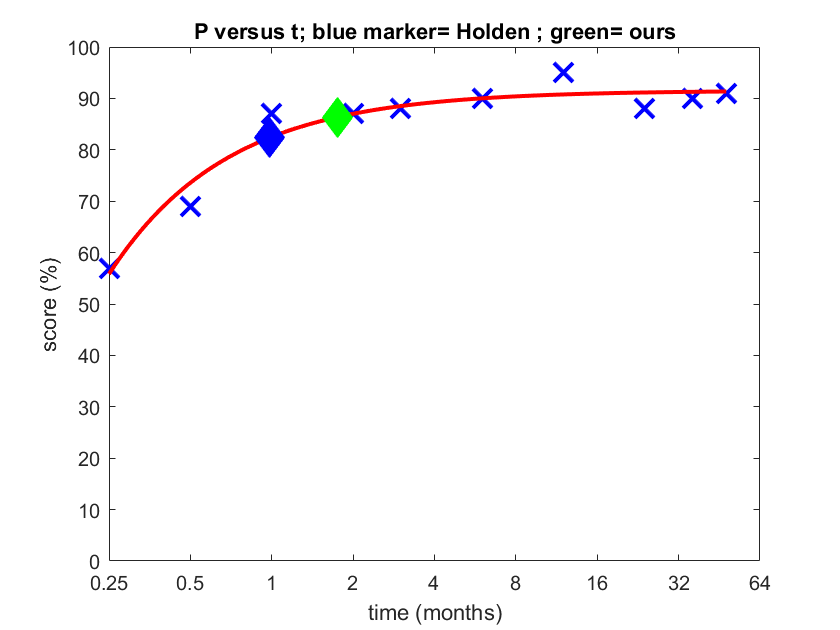 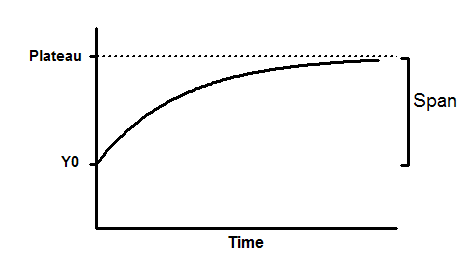 Sigmoids are more general and probably better for modeling learning than a simple exponential. Your exponential fits decently, but it probably doesn't describe the actual underlying process very well.

Importantly, learning is often not fastest at the start, there is often some level of "aha!" moment later on. Sigmoids can capture this.

There are a variety of sigmoidal functions, but they are all differentiable and have a central peak in the first derivative. The time to peak and slope at peak are both parameters you can use to measure learning rate, though they measure somewhat different things. Which one is more applicable will depend on how learning in your paradigm varies across subjects and conditions. Looking at the data you posted, the peak slope (peak of the first derivative) is probably a decent choice, although I'm not sure you really have enough data points in the first month to get a good measure.

Exponential fits are likely to be more unstable, and in the data you've posted it looks like your fit is overfitting the beginning and end of the learning process, so you're missing the most important part for determining the actual "speed", which is between your first 3 data points; none of these are fit well. With an exponential fit, you are supposing that the most learning occurs at the point of the first trial. In most tasks without substantial prior instruction, you need at least a couple of trials to even figure out what is going on, and can't start to improve until then. If that first "trial" is a whole block then maybe this is not a terrible assumption, but that's mainly because you've already passed the peak slope of the sigmoidal function early on; if you used the entire data then a sigmoid would still fit better.

This equation $Y_0 + (Y_{max}-Y_0)\left[1-e^{-\kappa x}\right]$ is simply an exponential approach, that is the solution to a first order differential equation. It is the most widespread equation in physics describing a process where the rate of change of a system is related to the state of the process. In the context of learning, it tells you that the better you are, the slower you keep improving. For that reason it is considered, as far as I know, the principled way to model learning.

As you figured out $Y_0$ is your starting point, $Y_{max}$ your asymptote, $\kappa$ the rate of change and $x$ your variable, usually time $t$. You'll often rather see this equation as $e^{-\frac{t}{\tau}}$, where $\tau$ is called the time constant and has the same unit as $t$ (obviously $\tau=\frac{1}{\kappa}$ and doesn't change anything about the meaning of the equation). It tells you, in the context of a resistor-capacitor circuit for example, the time it takes for the capacitor to discharge its energy through the resistor (in facts only about 1 third its energy, and is considered fully discharged after $3\tau$ because it has less than 5% its original energy remaining). So for learning this parameter has a clear meaning as well (learning time), and you can interpret it the same way people do in physics.

A logit function has a slope value as well. It is the natural way to model anything related to odd-ratios but I would argue it is not meaningful in the context of learning. If all you want is a descriptive model to compare the speed of learning it doesn't really matter what model you use as long as it fits data well. But I don't see the point of using a less principled and more complicated model when a simple exponential works.

A last point is that you could use a binomial distribution and Maximum likelihood estimation to fit your curve, instead of mean squares. It's just slightly nicer mathematically as mean squares kind of assumes that you could have a ratio correct >100%. But that's just a detail, both techniques will give you good results.

You could use something like Desmos to rapidly try out different functions and see how well they fit the different datasets you have.

The site allows you to vary different function parameters using sliders and see how the shape changes in response.

For example, here's a plot using Demos that reproduces the shape of the curve used to fit the data in Fig 1 quite well. 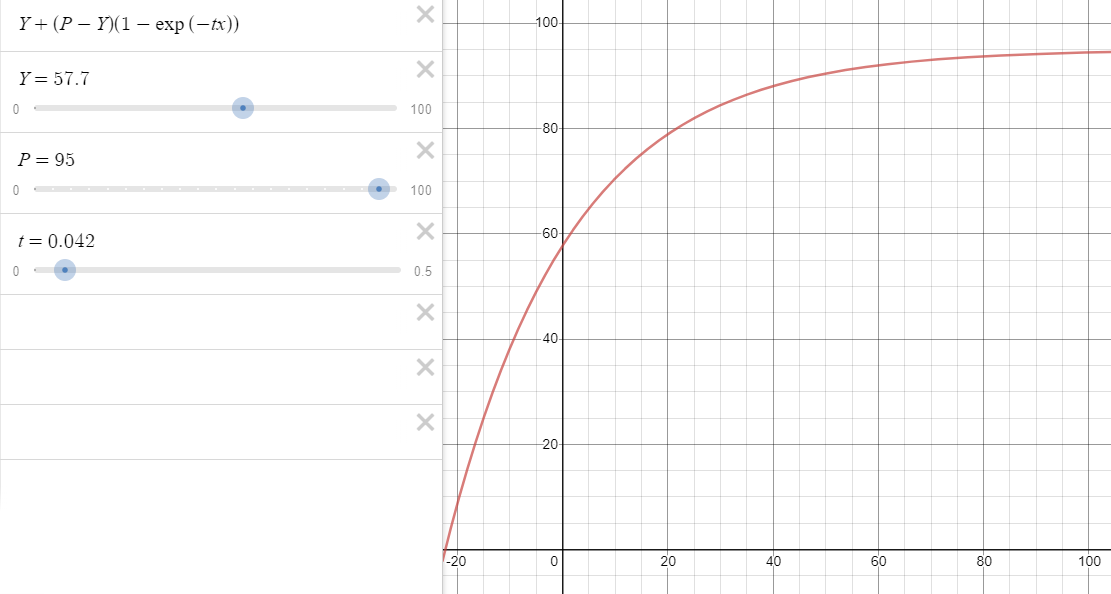 The above plot and sliders can be seen here: https://www.desmos.com/calculator/w0ye3ynpia

You can imagine the various curve fitting packages as essentially varying the parameter sliders to find the curve with minimum deviation from the data points.

Short answer
Learning curves can be fitted well with standard psychometric curves, like the Weibull function.

Background
I decided to also post an answer here myself, as I've been working on the data after the answers came in. I accepted Bryan's answer as they rightfully suggested that these data should not be fitted with a simple exponential, but with a psychomteric (sigmoid) curve. I chose the Weibull and went on from there.

A general form of the psychometric curve has two horizontal asymptotes, corresponding to minimum (guess rate) and maximal performance (1-lapse rate). They are often denoted as gamma and lambda, respectively (eq. 1).

A generalized psychometric curve is shown in Fig. 1.

The Weibull function is a popular used sigmoid for psychometric fitting purposes. Its function is shown in eq. 2. Note that gamma, or lapse rate, is omitted here, but can be simply added back in the first factor.

The Weibull function has been used before for learning curves, as shown by the paper cited by Bryan above (Gallistel et al., 2004). The logit function in the question is a variant on the Weibull.

Now, the speed of learning (beta') can be elegantly estimated by the maximum of the first derivative, as pointed out by Bryan in the accepted answer, i.e., the point where the second derivative equals zero, according to

Eq. 3. maximal slope of the Weibull function. Note that lapse rate lambda has been omitted (Strasburger, 2001)

In my specific case, I had to use a derived version because of the 2log axis in my data as pointed out above in the question.

I recommend the Strasburger (2001) paper for further details.

For comparison, I plotted the same sample data as above in the question using a Weibull fit in Fig. 2. The fit is still not great, as it has difficulty finding the lower aymptote, because of the lack of data here. This was the reason I chose the simple exponential earlier, as I was worried about this. Note that I expanded the left-hand side of the x-axis here to better show the course of the lower asymptote. 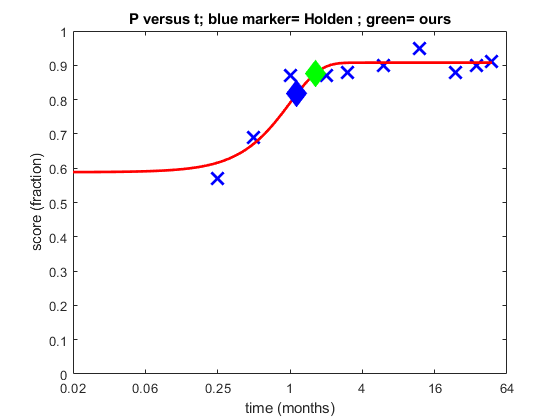 Fig. 2. Sample data with Weibull fit using the same data as in the question. source: own work

A more convincing fit is shown in Fig. 3, where the data is quite obviously a sigmoid. For this reason, a weibull fit is better. Further, (Gallistel et al., 2004) also successfully fitted data that lacked data points around the lower asymptote (their Figs. 1 & 7). 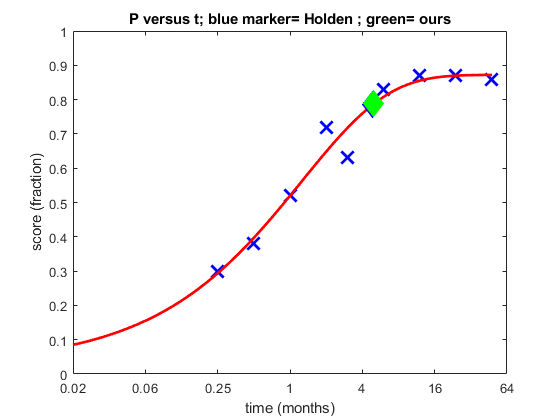 Fig. 3. Sample data with Weibul fit using other data than in the question. source: own work

Is your objective to model:

My feeling is that this problem is better modelled by thinking of the problem as modelling the decline in incremental daily learning over time.

There are two reasons for my assertion:

My gut feel tells me that modelling the incremental with a log-normal would be a great starting point.

Not the answer you're looking for? Browse other questions tagged learning methodology cognitive-modeling psychophysics or ask your own question.

6
Studies modelling learning curves of an overall task and subtasks
12
Fitting a psychometric function when data does not lend itself to a sigmoidal fit
4
Which Machine Learning classifiers do humans use?
3
Which ready-made programs can I use for running a preference-rating experiment?
10
Which statistical tests to use when analyzing NASA TLX?
7
Classical conditioning paradigm for hippocampal learning
2
May somebody use oddball paradigm solely for psychophysical studies?