What is actually happening with neuron during refractory period?

Sorry for a very rookie question. I've got an interest in spiking neural networks and therefore I started learning about different neuron models like Leaky integrate-and-fire, Izhikevich, etc. But then I became interested in the biological nature of all the processes happening "under the hood".

What I really don't get at this point in time, is what is happening with the neuron while it is in its refractory state? Most of the sources say something like during the refractory period, a neuron is unable to produce new spikes. Yes, I get it. But what happens internally? I.e. how the incoming impulses are handled during this time?

I mean, a neuron is constantly receiving impulses (spikes) from other neurons it's bound with via synapses. So hundreds (or even thousands) of presynaptic neurons will keep sending impulses to our post-synaptic neuron, while it's refracted. What will happen to all these impulses? Will they just become "discarded" somehow? Or will they be still somehow accumulated within the post-synaptic neuron and their influence will be considered later, after neuron comes back to the resting state, in order to produce an action potential?

Because, if the incoming signals are discarded, then we are losing the "data" in some sense, which I don't believe is happening in reality. If these signals are accumulated somewhere, what's the maximum capacity of this "somewhere"? What happens in case of overflow? And anyway it would mean that the transfer of the signal within the network gets delayed, and that's quite confusing...

You are thinking far too much about biological neurons as CPUs or some similar electronic equivalent; they are not, they are biological machines and much of the fidelity of biological signal processing comes from massively parallel probabilistic networks with a lot of simultaneous redundancy, rather than serial processing of a stack. Neurons encode information in space (which neurons are firing) and time (when do those neurons fire). There is no biological mechanism for encoding the strength of a signal beyond the maximum firing rate of an individual neuron without considering the ability of a group of neurons to fire together.

If you are interested in biological neurons, I would strongly suggest starting from a basic neuroscience textbook. You will get a lot further learning bottom-up rather than trying to reverse engineer what you know about artificial neural networks and network models in thinking about biology. Two books I typically suggest (any edition of either is probably fine) are Neuroscience by Dale Purves, and Principles of Neural Science by Eric Kandel. You can consider either of those books as references for the rest of this answer, which is all very basic in the context of a first-semester neuroscience course.

Neurons are not single-compartments (whereas most artificial neural network units are); they extend across non-isoelectric space, so events occurring at the soma/axon hillock are filtered before affecting the dendrites (where inputs tend to arrive). Therefore, "what happens during the refractory period" depends very much on where you are in the cell. This is addressed a bit in this Q&A: Does an action potential abolish an excitatory postsynaptic potential?

When neurotransmitters bind ligand-gated ion channels, a conductance is opened with some reversal potential. What happens to the membrane next depends on other parameters, in particular the magnitude of other open conductances (or the inverse, the input resistance) and the membrane voltage. Excitatory conductances tend to have reversal potentials near 0 mV, so the closer the cell is to 0 mV the smaller the evoked current will be. During action potentials (at least near the soma, and possibly propagated into the dendrites), the cell is depolarized and has low input resistance due to open voltage-gated channels. Inputs that arrive in that context are indeed going to be blunted if not entirely "wiped out".

There are two relevant refractory periods to consider. One called the "absolute" refractory period refers to the period of time during and immediately after an action potential. Action potentials occur due to a positive feedback loop of opening voltage-gated (typically sodium) channels. After opening, these channels inactivate and cannot be reopened for some time. This inactivation is necessary for an efficient repolarization of the cell back near rest after an AP is fired. These channels need to recover sufficiently from inactivation in order to fire again.

Here you are confounding the function of a neuron with its implementation (you might want to read about David Marr's 3 levels of analysis). Functionally you can describe neurons and neural networks using information theory, bayesian modelling, causal networks or any other framework makes sense in what you are studying. However keep in mind that a neuron is a biological object. 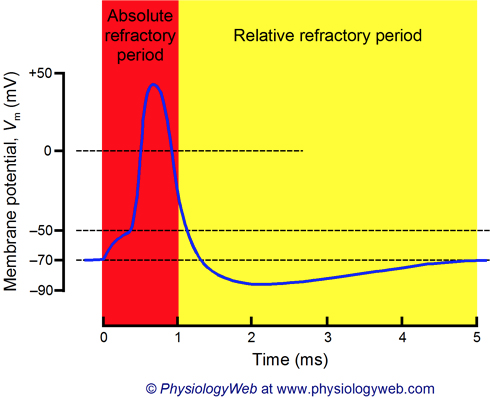 To go back to this idea of level of analysis, a model is always a simplification of the world. If you wanted to have an exact model of a neuron you would need to model the ions themselves. Instead if you are interested in the flow of ions you can simply model the gates and their dynamics. If you are interested in the electrical potential you can ignore the gates and use the Hodgkin-Huxley model. If you are interested in the spikes you can simplify it even further and use an intergrate-and-fire model. You can even model only the mean firing rate and so on and so forth. From the point of view of the neuron, or the ions being pumped in and out the neuron, there is no "data" to be processed. All you can say is that it functionally behaves as if it was implementing whatever function you are studying. But keep in mind it will always be imperfect as it is a biological object.

10
Does an action potential abolish an excitatory postsynaptic potential?

5
What neurobiological changes are associated with the end of the critical period in children?
5
Does each sensory neuron type have a characteristic spike sequence pattern?
3
What is the current consensus on if fMRI studies in blood flow actually match brain activity?
3
What are the rules that govern neuron behavior?
3
What prevents a neuron from activating an incoming synapse?
2
Are thoughts transferred along with a brain during a brain transplantation?
1
What information does the connectome actually contain?
3
What exactly happens to brain during anesthesia
1
What comes first? Thought or electric activity?
0
What is the meanning of an x-expressing neuron, with x = some protein?