I'm studying brain anatomy but I find coordinates systems are not consistent among books, lecture notes and internet.

There are 3 plane directions

What I actually find is that the same "view" of the brain often have different names, and different views have the same name. I wanted to get rid once and forever to all ambiguity.

How do I call a radiograph taken on:

How do I call a radiograph taken from:

I'm not familiar with radiography, only MRI, but I assume conventions are similar. By convention images are always shown as if in front of the subject, or looking at the subject's feet (from below). There might be specific names for the direction of the cut (from top or from below) but they are not common (I've never heard them). Usually to avoid ambiguity you would always present cuts in the standard orientation. You can describe the cut ("coronal" or "axial") but images are usually self-explanatory.

For planes there are multiple names being used. The most common, in my experience, are axial, sagittal and coronal. But you will occasionally see respectively horizontal, medial and frontal. The 3 axes orthogonal to these planes and their associated orientations are the superior/inferior axis, the left/right axis and the anterior/posterior axis. Again, these cuts will usually always be shown from front, or from below. If, for any reason, someone decided to present a different orientation that would be specified explicitly. The sagittal cut is unambiguous, but usually you'll see it with the patient pointing left.

I don't know the name of an image "without cutting it", but I would assume it is just a "projection". And I would assume that unless specified explicitly orientations would be the same as cuts. Indeed, the orientation conventions used in modern imagery have been inherited from the old-age radiographic plates. While drawings are usually depicted as seen from top because it makes more sense to look at a brain from the top during a dissection.

Left/right is useful to describe the overall orientation of a subject, but not of an area in the brain (area X is to the right of area Y is true only in one hemisphere), so these directions are replaced by medial/lateral for brain locations. For some reason superior/inferior are also replaced by dorsal/ventral, I don't know why. For example the dorso-lateral PreFrontal Cortex is the "outer-top" part the the PFC. The ventro-lateral PFC is the "outer-bottom" part. And the ventro-medial PFC is the "inside" of the PFC (that you cannot see looking directly at the brain). Even weirder anterior/posterior are kept, but rostral/caudal are also used. To make it even more confusing these 2 axes do not perfectly match (rostral points toward the front for the anterior parts of the brain but down for the posterior parts of the brain). The axial plane for the brain is defined by the interaural axis and the lower ridge of the eye sockets. Brain coordinates are usually (at least in the scientific literature) reported by their position on the antero-posterior and medio-lateral axes. The origin of the system is the midpoint of the interaural axis.

Unfortunately there is more terminology that you'll find. For example referring to other parts of the brain, like "occipital". Different reference system are often mixed, like Caudal IntraParietal vs. Anterior IntraParietal. So long story short, there is no consistent coordinate system. It is truly unfortunate that terms used to disambiguate brain locations are themselves source of confusion.

Here is an example of macaque MRI with from top-left rotating counter-clockwise, an axial cut, a sagittal cut and a coronal cut. I labeled directions for clarity. 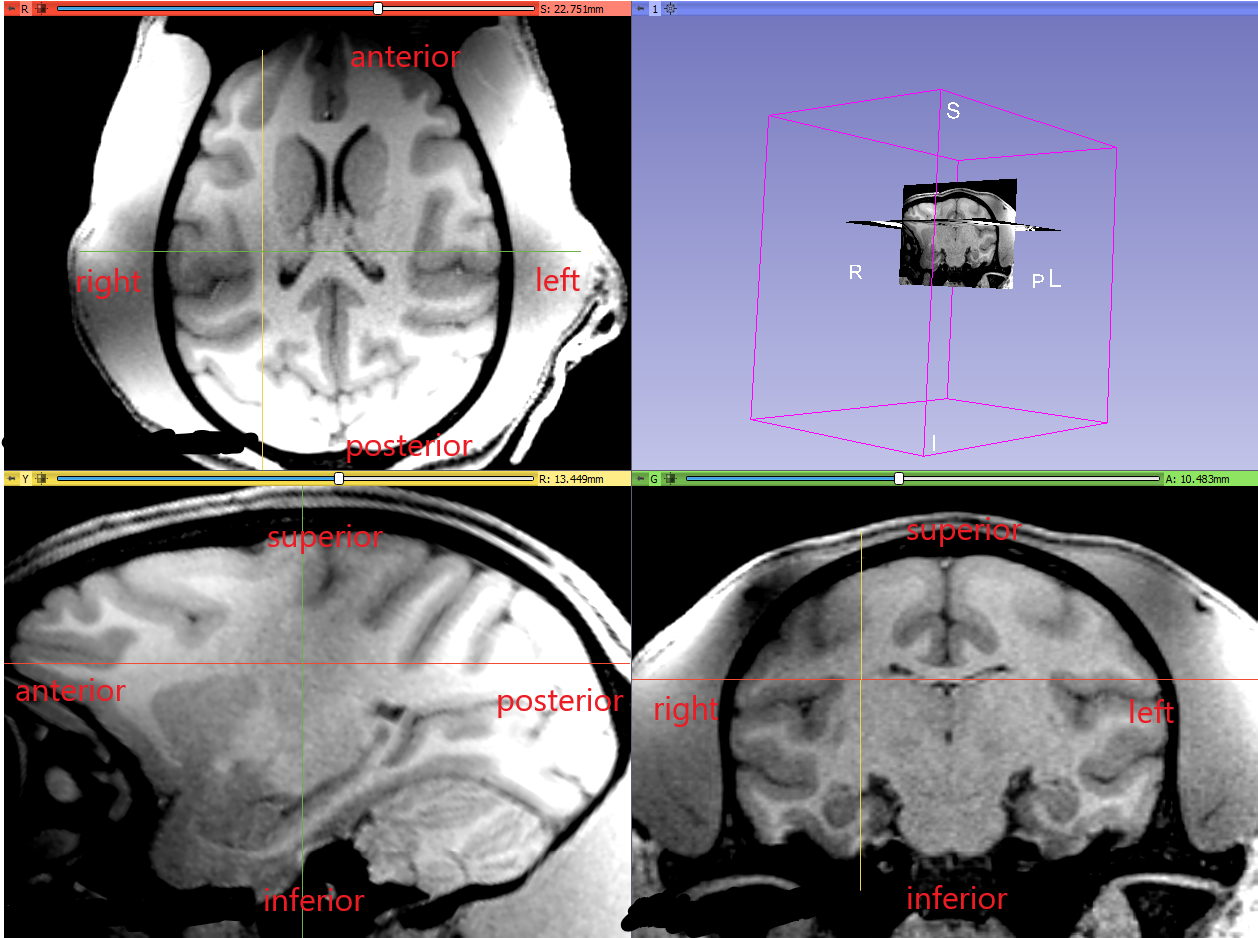 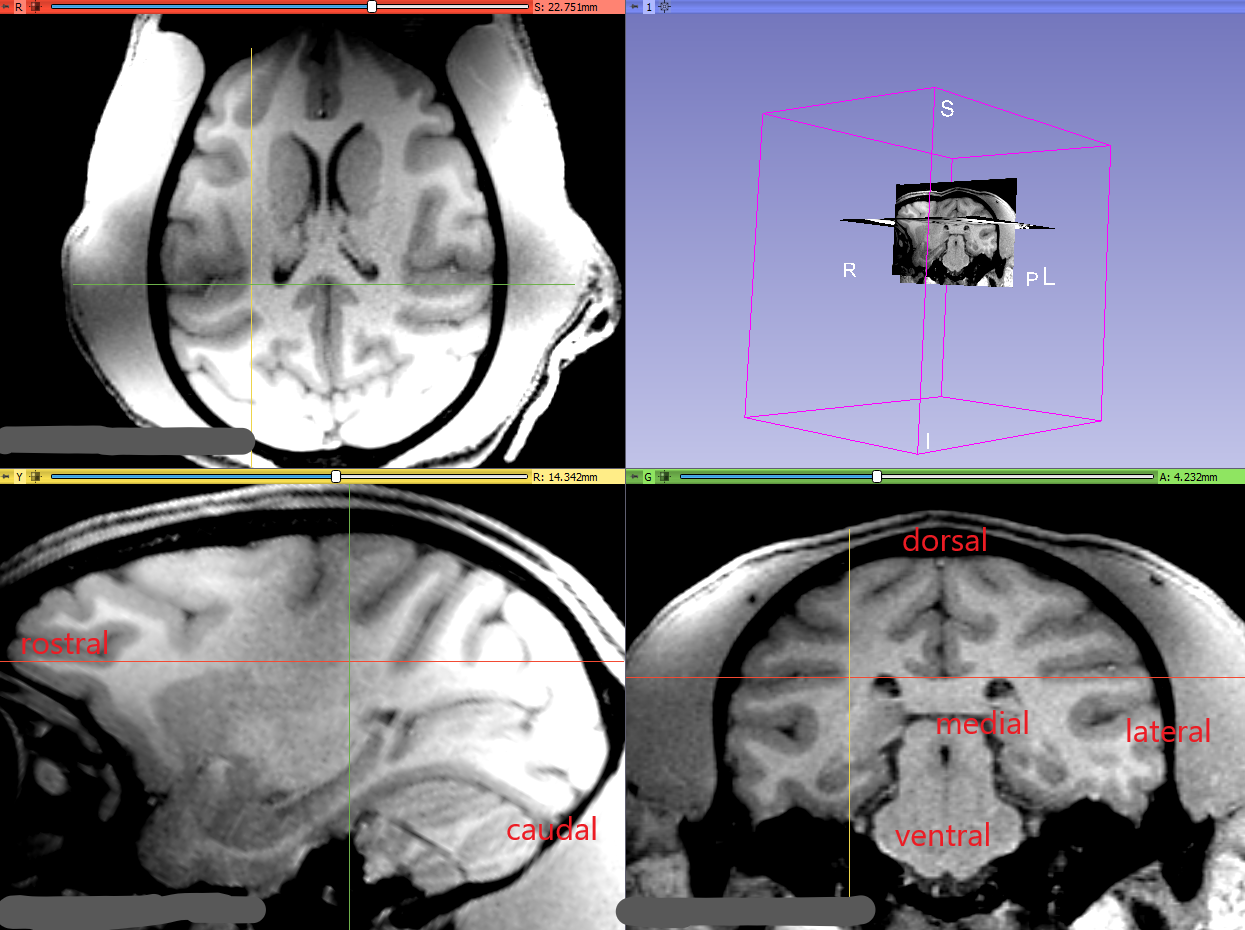 Not the answer you're looking for? Browse other questions tagged neuroanatomy or ask your own question.

8
Comparative functional neuroanatomy: humans & octopodes
0
What is the scope of the study of Neuroanatomy?