Are there any definitions of the perception & JND of the colour of light approximately like how the Weber Law defines it for the brightness of light?

As I understand it, the greater light levels are the more we require in order to detect a difference. I've also read this holds true for colour saturation. However, I can't seem to find any information that accounts for hue or the wavelength of light.

It depends how you define colors. Color-spaces are always 3D. The most obvious colorspace is based on the 3 types of cones you have (LMS) however it is not very sensible as you have no idea what your cones are. A slightly more sensible one is the CIE 1931 XYZ colorspace, which is a linear transformation of the LMS colorspace. One axis of this space was specifically chosen to match brightness perception. So if you take a plane orthogonal to this luminance axis you can define a point by 2 coordinates which can be (or not, again depending of what coordinate system you use) saturation (how far you are from neutral gray) and hue (the angle from neutral gray). You can measure thresholds, or Just Noticeable Differences (JNDs) around different points of this plane. Those are called McAdams ellipses (after the scientist who first performed this experiment). They look like this: 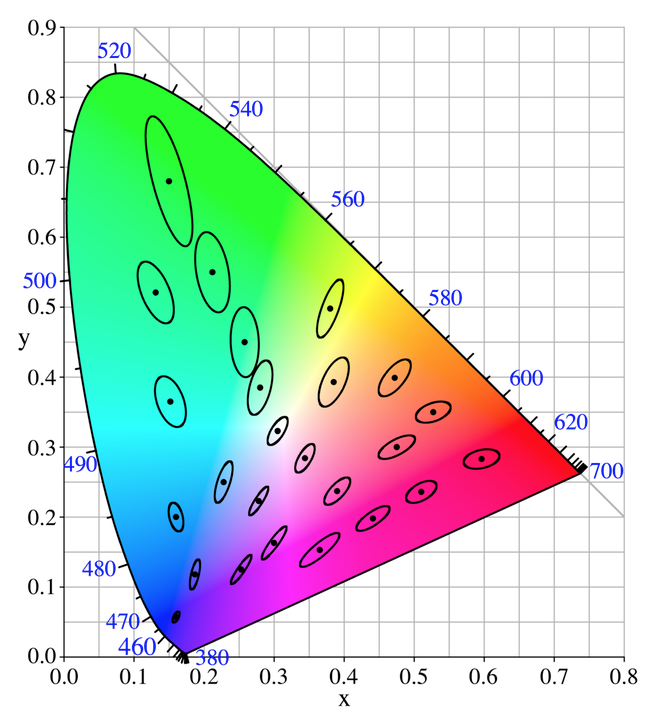 As you can see the size and orientation of these ellipses vary widely depending on where you are in this space. So it is not really true that Weber's law applies to color perception. Not to saturation and certainly not hue. At least not when you measure chromaticity in terms of physical units.

In facts in color perception the reasoning is somewhat inverted. What colorspace should you use, considering a physics-based colorspace, such as CIE XYZ, accounts so poorly for what we subjectively perceive? More recently different colorspaces have been designed that distort the XYZ colorspace non linearly such that these ellipses become more circular (e.g. the CIE Luv color-space). In that case whether Weber's law applies or not totally depends on how you defined you colorspace. But we know that Weber's law is a general law in perception and applies to all percepts such as motion, depth, you name it, and also more abstract percepts such as numbers. So it is sensible to design a color-space where saturation respects Weber's law. However for hue Weber's law is not meaningful, as it is an angle.

Most obervers can differentiate about a million different colors (Halsey & Chapanis, 1951). Generally this is referred to as the JND of hue. The difference between the definition of color and hue is minimal; basically, white, black and grey are considered colors, not hues. Anyway, a Google Scholar search using the keyword 'JND + color' didn't come up with much, but 'JND + Hue' did the job for me.

I have added a few interesting, classic references below. A search with 'JND + Hue' yields many more.

Not the answer you're looking for? Browse other questions tagged perception reference-request psychophysics color or ask your own question.

19
Effect of words highlighting on reading comprehension
8
What is the sleep study that showed that a percentage of humans have a biological clock that is ~28 hours or greater?
7
Do eyes accommodate to color?
9
Are there gender differences in color discrimination ability?
4
Do we perceive contrast colour patterns easily because of adaptation?
3
How to track eye movements with electrodes?
0
Equalize/balance brightness and saturation of different colors using RGB (across various monitors)