What percentage of the population have the brain anomaly associated with the inability to exhibit empathy?

According to an article on livescience.com, "Narcissists' Lack of Empathy Detected in Brain Scans", research seems to indicate that a low volume of grey matter in the left anterior insula is associated with an inability to exhibit empathy.

Researchers used magnetic resonance imaging to scan the brains of 34 people, including 17 individuals who suffer from narcissistic personality disorder, and found that pathological narcissists have less gray matter in a part of the cerebral cortex called the left anterior insula.

What percentage of the population have this particular condition?

In short, the question cannot be answered as-is. I will explain why, and then answer a broader question that you may find useful instead.

As background, consider the common problem of reverse inference: Suppose we identify subjects with relatively low grey-matter volumes (GMV) in the left anterior insula (LAI). Can we conclude that these subjects have low empathy? Well, the source paper for the referenced article already says ... not really:

What about NPD, can we conclude that they have NPD? Well, subjects with low LAI GMV might have NPD, or they might just be good singers! Or maybe they are just good at learning new languages! In fact, low LAI GMV is associated with some cognitive advantages, as well as many mental disorders. See, one of the problems with reverse inference is that psychological constructs simply do not line up well with gross neuroanatomical features - that is, brain regions do multiple things.

A second issue is with the concept of an abnormality. Although the source paper discusses "structural abnormalities in fronto-paralimbic brain regions of patients with NPD," it does not define this abnormality. Consider this figure from the paper: 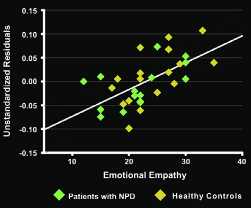 Here, the vertical (Y) axis represents LAI GMV. It does appear that NPD patients (green) have lower LAI GMV than healthy controls (yellow). However, where is the abnormality? What volume difference constitutes an identifiable condition?

Technically, we should also be concerned with the low power of this paper (only 17 subjects in each group). For example, an earlier study (with 11 subjects in each group) found differences in the right anterior insula rather than the left. Hmmm... Replication crisis anyone? But let's put that aside for a minute, and consider the question at hand.

Suppose for a minute that low LAI GMV did indicate something about empathy (though it probably does not), and that there was a definable abnormality of LAI GMV (though there probably is not), what percentage of the general population would have such an abnormality?

Well, it's reasonable to use a normal distribution to estimate this. For this, we need average and standard deviation values for LAI GMV. I am not aware of a meta-analysis looking at this, but some individual studies report such values. For example, this study of 39 subjects reports LAI GMV (corrected for total brain size) mean = 2209mm3 and std = 214.2mm3. Supposing that this is representative of the general population (I wouldn't assume that, but it's a start), a normal distribution might look like this: 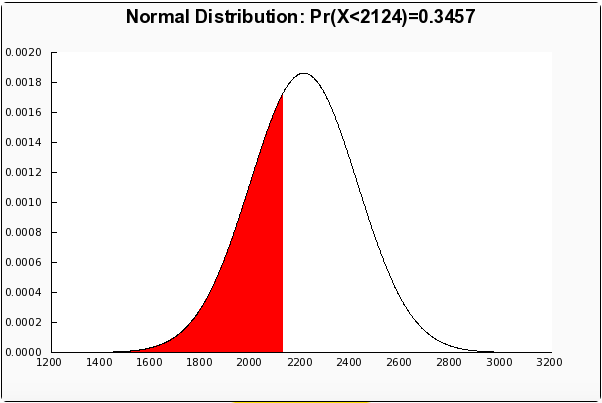 For this example, I just went with the cut-off being the mean for clinical patients in the study (2124mm3), resulting in about 35% of the population below the cut-off, but you can construct your own graph with whatever cut-off you deem useful for your purposes.

Kent Kiehl's work may be the closest means of determining this. According to an interview, he states "psychopaths have 5 to 10 percent reduced gray matter density in and around the limbic regions [a network deep in the brain that's important for emotional processing]." If his source(s) can be examined for 1. what percent of psychopaths exhibit such reduced gray matter like all or most or some and 2. compared to what data regarding the general population.

For the former, it could be twisted into finding your answer by simply combining that and the fact (which multiple sources have reported) that psychopaths make up 1% of the population (Note!: almost all sources that report this do so based on behavior, which is sampled and attempted to be detected, not based on anatomy and brain structure).

It is in the latter where more details on this condition can be found for the general population, if Kiehl source(s) does happen to have it.

If anything, enough brain scans of the general population to best ascertain this have not been conducted.

Not the answer you're looking for? Browse other questions tagged moral-psychology or ask your own question.