Why can't we do the things we know instantaneously?

In the following video eventhough people know that when handlebar of the bicycle is turned left the wheel of that bicycle is turned towards right and vice versa, they can't ride that new bicycle instantaneously without any practice. Why is that so? Why can't we do something even though we know how it works? what is the scientific explanation behind it?

One more hypothetical question relating to this. Let us consider a boy who never swam in his life, if theoretically came to know each and every aspect of swimming ,learning for several years. If one day after these years he fell into a large swimming pool, can he decently swim by applying his theoretical knowledge.

This is not a thought experiment as in philosophy.I want to know scientifically how his knowledge and doing of swimming correlate?

Motor learning is a complex process (Wolpert & Flanagan, 2010). Oftentimes the process is broken up in elements (Weaver, 2015):

The process you describe as having the 'knowledge' is part of phase 1, namely cognitively analyzing what is needed to do the job. However, the associative phase is necessary, where one actively practices and obtains feedback through observation and instructions by a teacher of what is correct, and what still needs work. Lastly, the motor behavior needs to be automated, such that it can happen without conscious control (Weaver, 2015).

This process needs a lot of time and hence the scene in the Matrix where Neo learns Kung Fu in a split second is obviously not possible. In fact, mastering martial arts, and in fact any skill, leads to profound changes in the brain, including gross structural changes that can only happen over the course of days, weeks, or even months. For instance, jugglers have been shown to increase gray matter over time in specific areas of the brain (Fig. 1). 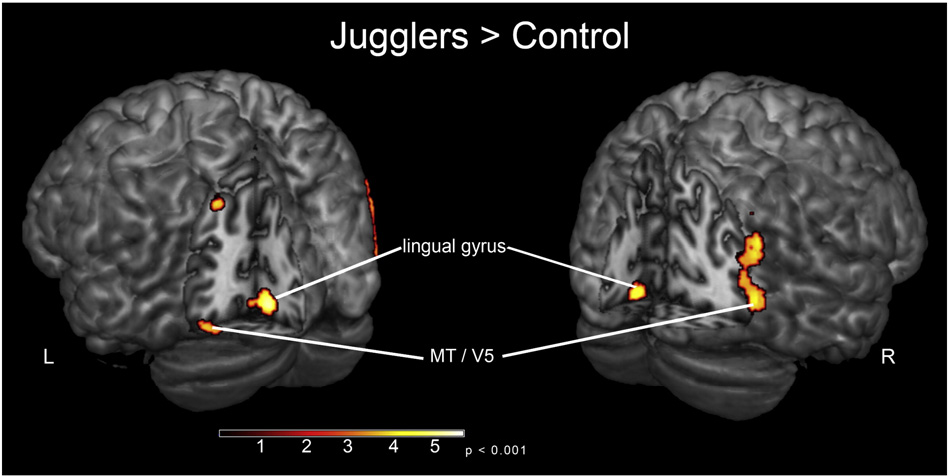 Not the answer you're looking for? Browse other questions tagged neuroscience cognitive-neuroscience brain brain-training brain-development or ask your own question.

2
About the left and right side of the brain
9
Why can't we use 100% of the brain in a certain moment?
1
The number of things we can focus on at once
4
Why can't we learn what we don't like?
1
how to train our brain to always use left part for thinking & deciding things?
8
How do we know human brain development stops around age 25?
0
How do neurons know where to send transmitters?
0
How do we know that neurons are the only cells involved in cognitive computation?