Can eye tracking be used as a form of biofeedback?

I'm an occasional meditator and I've noticed that conceptual thought often produces eye movements, and I'm curious if anyone has tried using eye movements as a form of biofeedback. The Muse headset for example tracks EEG data and plays it back to the user as sound. I'm curious if it would be possible to set something like that up with eye-tracking using consumer-grade technology, and if any research has been done on eye tracking as a form of biofeedback.

There is a well known relationship between pupil dilation and multiple cognitive processes such as attention, surprise, task difficulty etc. It remains unclear which specific process modulates pupil dilation, but it is a fairly large (but slow) effect that can easily be picked up by consumer-grade eye-trackers. See below an example of a paper using pupil dilation to decode which letter a patient is attending in a human-computer interface system.

Similar effects have been reported with microsaccades (the tiny movements your eyes make even when you are fixating, see comprehensive review below). However microsaccades are hard to detect and most likely beyond the capabilities of a consumer-grade eye-tracker.

There are studies trying to link larger eye-movements to cognitive processes. This idea goes as far back as Yarbus' work, who was the first to record eye-movements in freely-looking observers. See a famous image from his work below. Similar techniques are being used by advertising companies today to try to predict consumers preferences. It is hard to tell how valid these techniques are in the industry. But there is also some very good work looking at these questions in academia, see for example a paper from Laurent Itti's lab below. 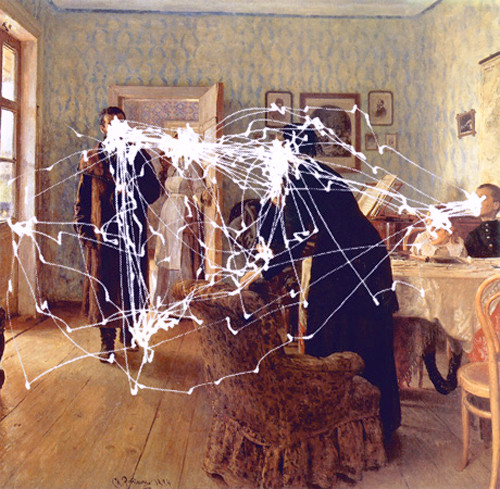 Finally preferential-looking is a classical technique in developmental studies (with children). For example you display 2 stimuli, one containing depth the other one not, and if the children are looking more often at one or the other then you know they perceive a difference, even at an age where they are too young to explicitely report their percepts.

Kowler, E. (1990). The role of visual and cognitive processes in the control of eye movement. Reviews of oculomotor research, 4, 1-70.

Not the answer you're looking for? Browse other questions tagged cognitive-psychology neuroscience cognitive-neuroscience vision eye-movement or ask your own question.

10
How does the brain act on the information gained via eye saccades?
4
What is the proper term for the synchronization of eye movements?
4
Eye movement tendencies for shades, sizes, shapes, and colours
4
What is the maximum size of content the human eye can focus upon?
5
Does looking into a mirror relieve eye strain in a similar way to looking at distant objects?
3
How to track eye movements with electrodes?
4
What degree of control do we have on eye movements?
1
How to estimate eye-in-head rotation (degrees of visual angle) from a 2D video of the eye?