Where to find information regarding the effect of ion concentration in the brain on behaviour?

Hopefully this is the right area. but for some background, for a school project I'm currently trying to design a medically accurate zombie. I have half a semesters knowledge of basic physiology, and part of the class is that I do more research into areas that are relevant to my project, and I'm wondering where I can find any info, or if you have any insight.

You see, we're in groups, and so far we've designed it so that the infection is spread by fungi, other members of the group are working on how it crosses the blood brain barrier, how it spreads, etc. I'm looking at behaviour.

One thing we've considered is that the fungi destroys parts of the brain like the frontal cortex, so the victim loses their personality, and some similar ways that it makes the victim more zombie-like. One idea I've been trying to work with is that the fungi alters the concentration of ions in the brain. The problem is, I can't find much research that is accessible to someone with my knowledge. I've found some articles like this one: https://europepmc.org/article/pmc/pmc3628083?client=bot#free-full-text , that describe the effect of one ion concentration on one aspect of neuronal behaviour.

I guess what I'm really asking is whether there is one source that puts a lot of these facts together so someone without a medical degree could understand it, possibly with some additional research? I just want to know a list of ions in the brain that can modify neuronal behaviour, what that would look like, and how that works.

Is there a source like this that exists? Am I able to access it? Do I have any misconceptions about this subject?

Please let me know, any help or input is greatly appreciated.

The 'ion concentration in the brain' is a really general concept. A biochemist (I did Biochemistry in a, seemingly, previous lifetime) might approach this question by taking a brain, freeze drying it, then homogenize it and determine ion concentrations.

However, the effect of ion concentrations in the brain plays out its role in a much more confined space, namely across the cell's membranes. The differences in ion gradients across the neuron's membrane is what determines its responses. Further, different brain areas govern different responses. Gross changes in ion concentrations in the prefrontal cortex for instance will exert wildly different effects than the same procedure in the brain stem.

If you want to go this way, you should perhaps confine yourself to a specific area of the brain, and to a specific way of disregulating ion homeostasis. Or veer away from the idea entirely.

What you'd rather could use as a source of inspiration are zombie ants. These ants are 'zombified' by the fungus Ophiocordyceps unilateralis, which infects Camponotus leonardi ants that live in tropical rainforest trees. Once infected, the spore-possessed ant will climb down from its normal habitat and bite down on a leaf and then die.

The fungus can only flourish at a certain temperature, humidity, location and distance from the ground. By hijacking ants they re-locate themselves to ideal spots. in fact, 95% of the ants found their way to the north side of a plant, about 25 centimeters above the ground, in an environment with 94 to 95 percent humidity and with temperatures between 20 and 30 degrees Celsius (Harmon, 2009).

Note, however, that the underlying pathophysiological underpinnings are entirely different from your original ion homeostasis idea. 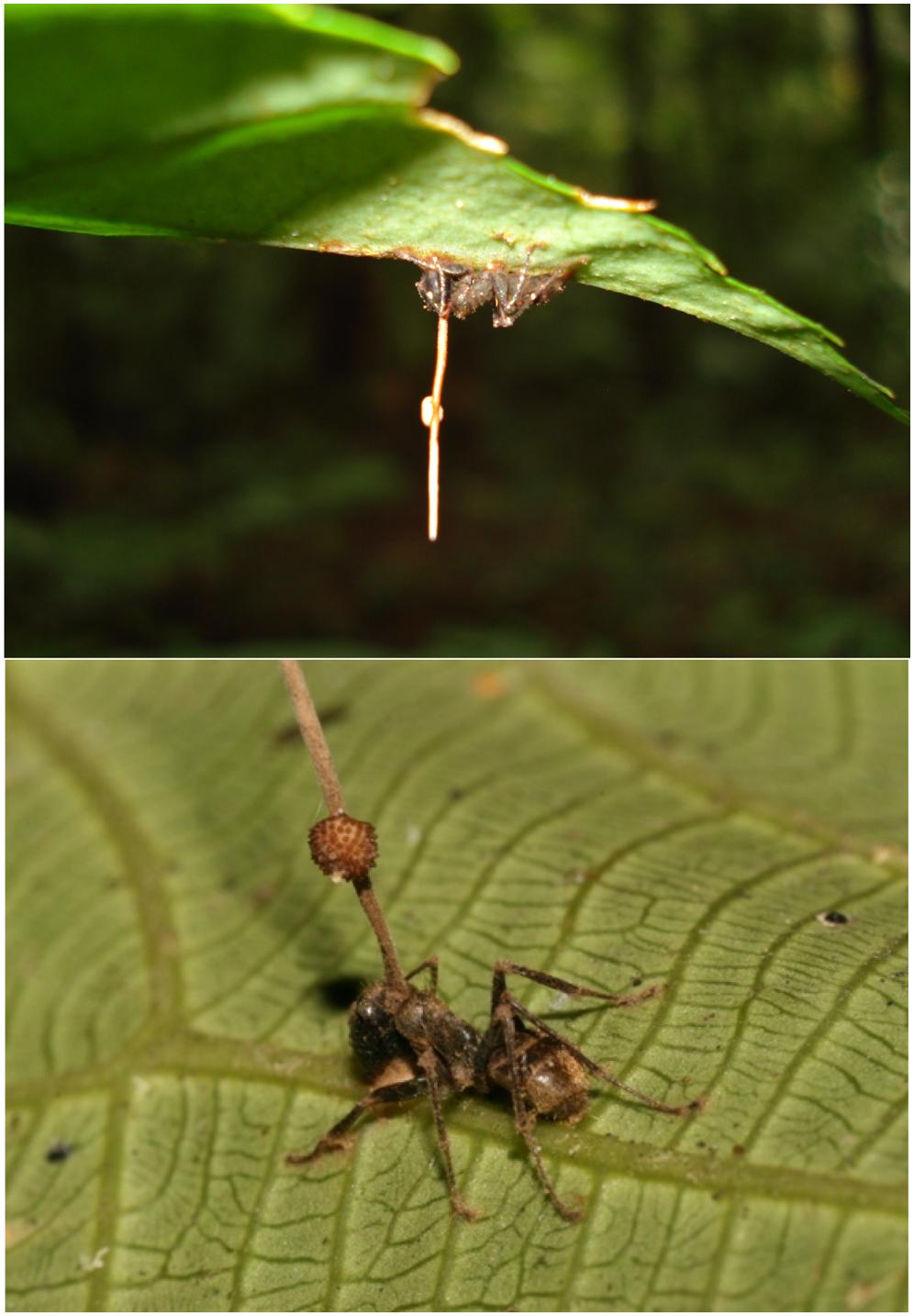 Source
- Harmon, Sci Am, Fungus Makes Zombie Ants Do All the Work, July 2009

52
What are current neuronal explanations and models of 'consciousness'?
6
Does each sensory neuron type have a characteristic spike sequence pattern?
3
Where in the brain is meaning extracted from visual information?
2
Where can I find good references about the neuronal connections in various areas in the cortex?
5
What's the relation between firing of dopaminergic neurons and dopamine dispersion in terms of neurophysiological processes?
3
Where can I find the connectivity matrix of the connectome of C. Elegans?
3
Is there a way that an infection could target a specific area of the brain?