I was chewing gum when I took the Trident gum wrapper and rolled it into an open cylinder with a diameter of about 1.5mm (give or take 0.15mm). When I look through the gum wrapper (I have to put it right up against my eye and position it just right to be able to see all the way through), images seem about 10% smaller (extremely back of the napkin assumption) than without the gum wrapper.

This is hard to measure empirically, so I tried to take a photo showing this effect, but the camera showed no difference between the two (the one through the wrapper is brighter, but I think that's just the iPhone camera trying to adjust to the surrounding dark and thus trivial). Just to confirm, I asked 6 people if they see any differences between viewing items through the gum wrapper and without the gum wrapper, and all of them said that the images through the gum wrapper looked smaller than without the wrapper. [EDIT: Asked 4 more people and 3 of the 4 said the image was 5-10% larger than normal]

[EDIT 2: The images also get larger (smaller for the people who said the image was larger) as the wrapper moves away from the eye and towards the object, eventually reaching true size when the wrapper is at the object.]

The only reason I could think of this happening is based on another observation I made. As I brought the gum wrapper into position, objects seemed to bend as they passed over the wrapper in my vision. The only thing I could think of is that the diameter of the cylinder is small enough that this "bend" doesn't have time to even out, and thus collides with the "bend" on the other side of the wrapper and creates a smaller image. However, this assumes that the distortion is causing images to be smaller when viewed through the wrapper. The "bend" distortion could also just be a byproduct of the actual cause of this phenomenon and just a symptom of the image getting smaller.

Why is this occurring?

EDIT 3: More photos that are more out of focus as recommended for more data

I suspect this is related to distance perception and size constancy. The retinal size of an object (the actual projection of the object on your retina) decreases with 1/distance. However your visual system is compensating for this effect, which is called size constancy. For example if you put one thumb at arm length (~60cm) in front of you and another at half that distance, they will appear roughly the same size, the farther one a little smaller, while it is actually half the size of the closer one. Similarly when you look at yourself in a mirror, your face seems regular size. Next time your are in front of a mirror with condensation, draw the contour of your face in the condensation. You'll be surprised by how small it actually is. Your visual system uses distance cues to perceptually "rescale" objects so that they appear closer to their real size, and not just the size they have on the retina. This is the basis of illusions such as the corridor illusion or Ames' room. 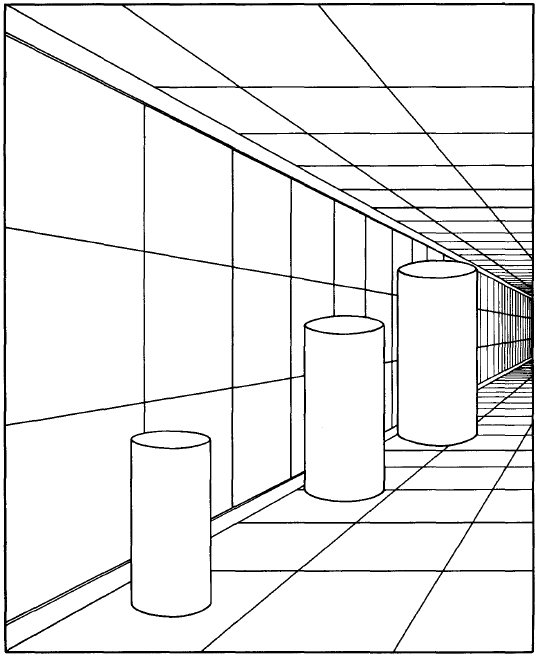 To go back to your question, when looking at the keyboard through the wrapper you basically eliminate all distance cues (binocular vision, perspective...). Now in an uncontrolled experiment using uncontrolled stimuli it is a bit hard to predict what will happen perceptually, but you can assume that you'll reduce the amount of perceptual constancy and objects will appear smaller (closer to their retinal size), which seems in agreement with your observations. Why does one of your friend perceive it as larger? A similar phenomenon occurs with prisms. With prisms you artificially increase or decrease vergence angle, a cue for distance perception, while preserving the retinal size of an object. Consequently objects appear larger when you decrease vergence (because an object that would elicit the same retinal size but is farther would actually be bigger), or smaller when increase it. However is small subset of the population report perceiving the opposite effect, and as far as I know no one has provided a good explanation of why.

46
Why would the brain flip the images perceived by your eyes?
10
Is there an effect of visual expertise on eye movements when examining an image?
7
Is there any science behind movie/commercial camera angle changes?
7
Do eyes accommodate to color?
8
How to set up a binocular rivalry experiment which splits a single image in two separately controlled ones?
0
Psychological explanation for perceptions of the Loch Ness monster
2
Does the human eye have a muscle that if paralyzed would make us only see things that are in motion?