To make my question specific and not too broad, let me just ask the following:

Which principles of grouping neurons is missing in the list above?

(There should be not so many.)

For each classified group of neurons some numbers will be interesting to know:

In anatomy/physiology, there are 2 major categorizations of the nervous system: 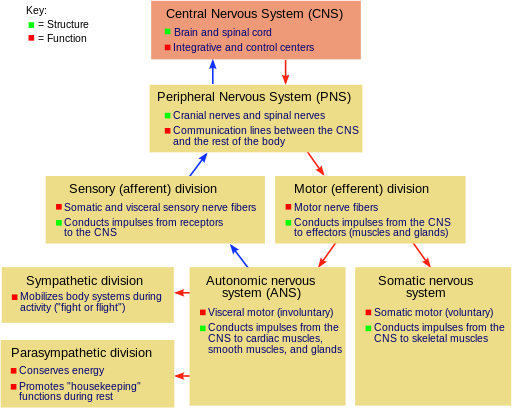 Neurons can be further categorized by neurotransmitters involved (dopamine system, acetylcholine system, etc.), and by various anatomical and functional subsystems.

Examples of anatomical and functional structures formed by neurons:

Not the answer you're looking for? Browse other questions tagged neuroscience methodology cognitive-modeling neuroanatomy or ask your own question.

19
Is there a region of cortex which over a period of development becomes the seat of self?
0
What background is required to understand the book “Principles of Neural Science”?
3
Where are intrinsically bursting neurons found in the mammalian brain?
5
Can two neurons in the brain be connected more than once?
0
How do neuro transmitters interact with neurons in the brain?
3
What is the proportion of excitatory vs. inhibitory neurons in the feline thalamus?
3
William James “Principles of Psychology” and Brain Plasticity
2
Can two neurons stimulate each other?